11/5/2019
Melissia Mason
When it came to choosing this year’s fall play, Theatre Director Erica Tryon was inspired by one of her frequent theatre students. They had mentioned that Clue was one of their favorite movies growing up. It's a cult classic, beloved for its silliness and heightened style. When Ms. Tryon heard that it had been made into a play, it seemed like a great fit for Emma Willard School. The script provides an ideal cast size for our theatre department, and the concept of Boddy Manor fits perfectly into the beautiful detailing of Kiggins Hall. The play also overlapped with Halloween so, as a murder mystery, the timing was perfect.
Work on the production began with casting in early September. Over the next two months, the cast and crew put in over 60 hours of planning, rehearsing, set-designing, and costuming. Ms. Tryon shares that the most exciting part of this production has been watching the growth of the cast members that she has had the pleasure of working with for all four years (there are 14 seniors on the cast and crew). “Sometimes they'll be on the stage as confident seniors, and I think about the difference in their physicality and vocal quality from four years ago. It's really quite remarkable. It's also a terrific pleasure discovering students at the beginning of their journeys and watching them emerge on the Emma stage.”
When the time came to present the play, the students performed an open dress rehearsal leading up to two packed sold-out evening performances. Audience members were warned ahead of time there would be spooky sounds, loud bangs, sudden scares, and several terrifying moments to make the Halloween-week production hauntingly spectacular.
On opening night, the cast was energetic and spirited. Ushers Ava T. ’20 and Lucy C. ’21 welcomed each audience member, while Sam B. ’23 set the mood on the piano. All of Kiggins Hall served as the stage as the ensemble led the audience through each deadly, hilarious scene. Shenanigans began with the maid Yvette (Hannah S. ’20), having a verbal spar with the cook (Jenny J. ’22). Wadsworth, the butler (Rose G. ’20) greeted the audience and made apologies for the behavior of the Boddy Manor staff. Subsequent introductions were made as Miss Scarlett (Tess J. ’22 on Friday, Ashley S. ’20 on Saturday), Colonel Mustard (Lane A. ’20), Mrs. Peacock (Ally S. ’20), Professor Plum (Jax W. ’20), Mrs. White (Katie V. ’21), and Ms. Green (Aliza G. ’20) entered the manor.
What followed was a dynamic, physical comedy as the cast rushed about from one macabre discovery to the next. Subsequent entrances by a stranded motorist (also played by Jenny J. ’22), Mr. Boddy/the cop (Ari I. ’22), and a singing telegram girl (Jessica Z. ’22) rounded out the cast.
Under the technical direction of Michael Myer, crew members Isabella P. ‘21, Sarah H. ‘20, Isabel S. ‘22, Sarah Y. ‘20, Alex S. ‘20, Cat H. ‘20, Kayla S. ‘22, Crystalynn C. ‘22, Diba D. ‘20, Julia F ‘20, Mia P. ‘22, Serena L. ‘23, Sarah K. ‘22, and Yishu X. ‘22 made sure the production stayed on track.
Participation in theatre is a fun and exciting experience, while still highly educational. When asked what she hopes that her students learn from their theatre work, Ms. Tryon shares:
Building a company is a remarkable experience, very similar to being on a team in a sport—knowing and trusting that every person is doing their part and that each individual is an indispensable part of the whole. There's a certain kind of buzz, a certain magic to that. I hope that they learn that they can do it! So many people are terrified to step onto a stage or to speak in front of people, and what I find is that generally after people do it once, they realize, "Hey, this is kind of fun. Maybe I'm okay at this." I love that moment, after a person's first show, when they have that realization and then they want to do it again and again... And my ulterior motive is always the same: I want people to be lifelong theatre-goers. If you've participated in theatre as a young person, you're much more likely to fall in love with the art form and spend the rest of your life seeking out opportunities to see and immerse yourself in theatre as an adult.
Certainly, the cast and crew of Clue were a remarkable company, creating their special kind of magic in Kiggins Hall last weekend. 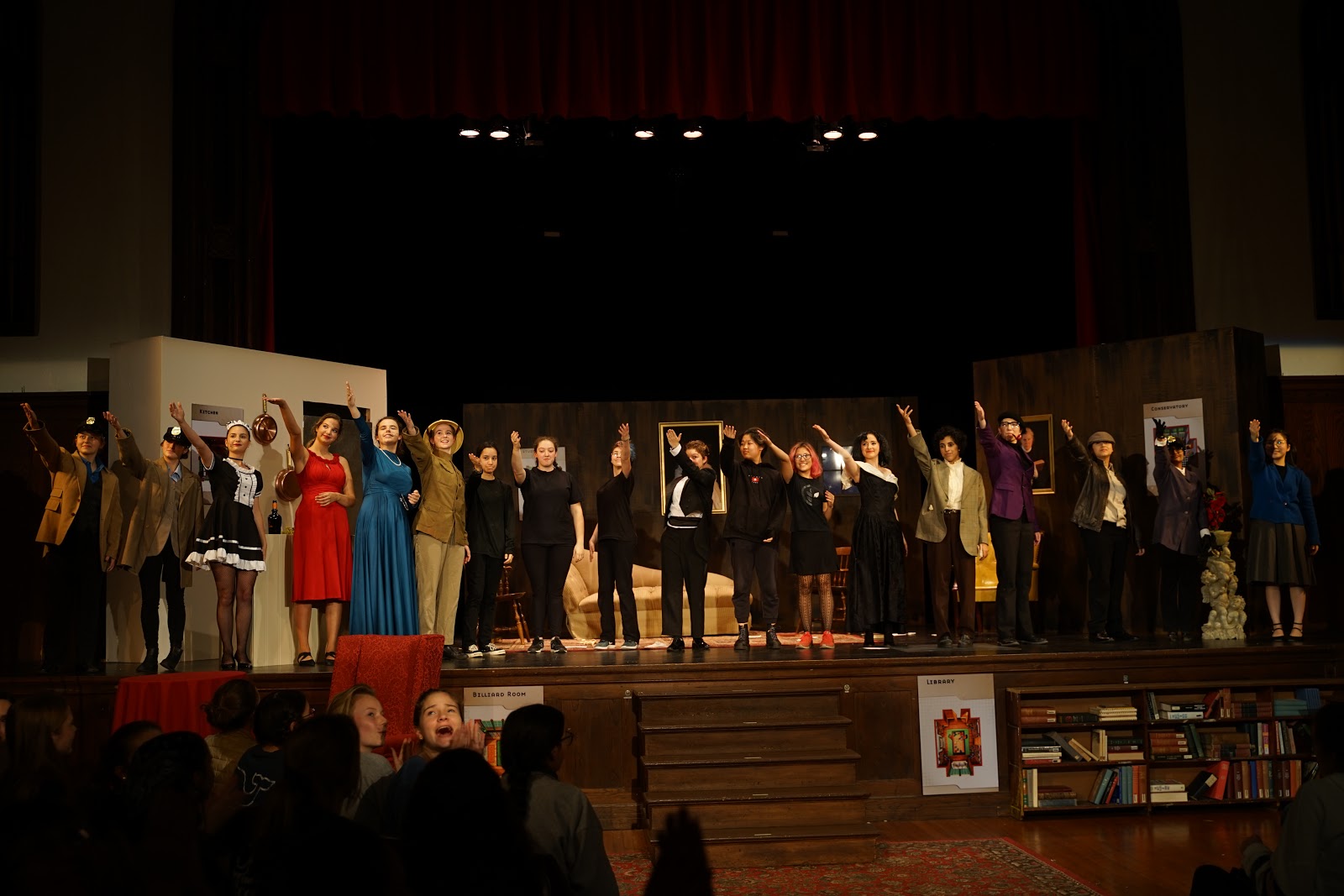