12/3/2021
By Sandra Santana
Last month, Emma Willard School came together to celebrate 180 Jesters across 11 Fall sports at Athletic Desserts. While all athletic celebrations bring joy to the community, this particular event was a special one, marking the first full season of play since Fall 2019. Read on for our list of Fall award winners! 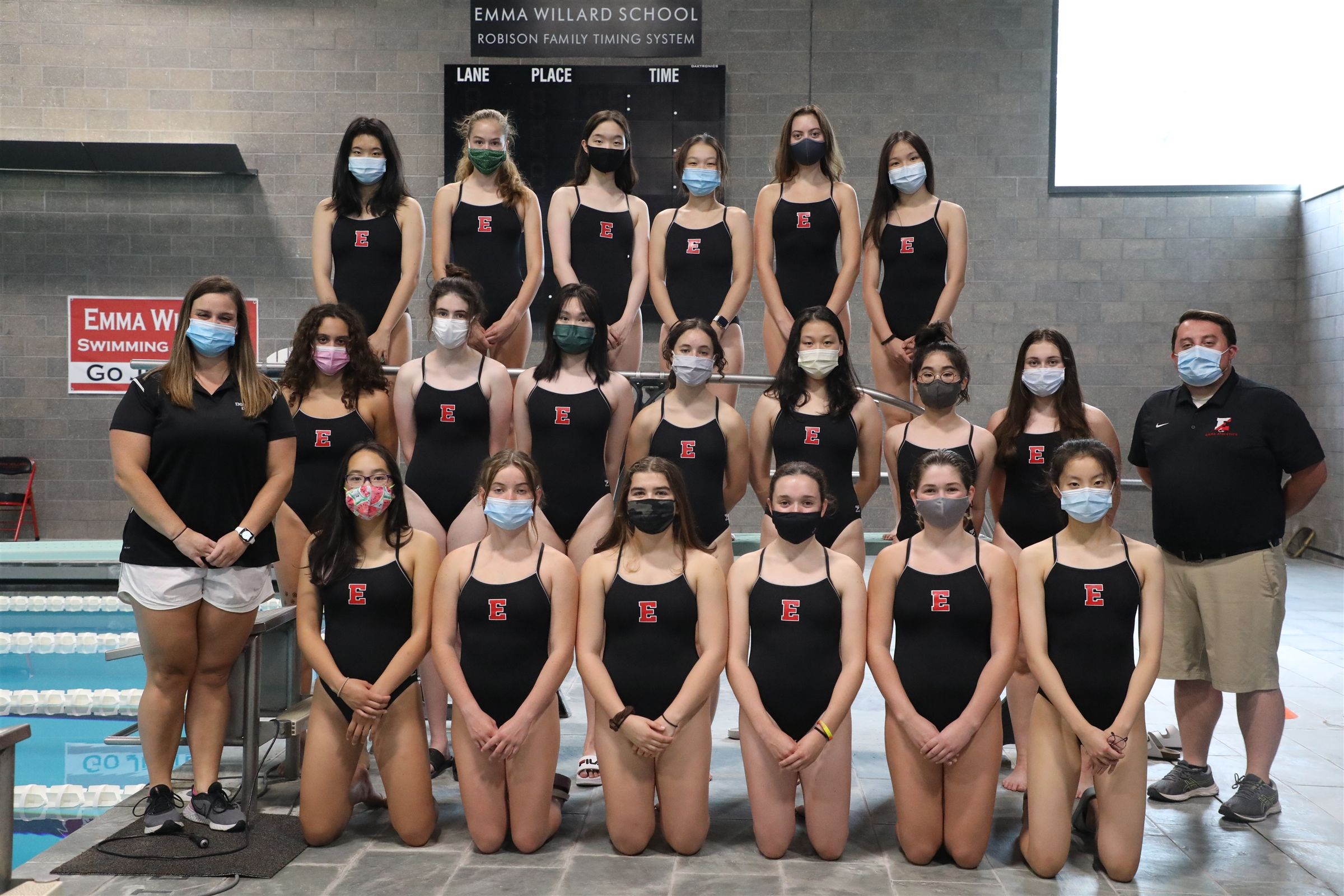 The 2021 Swimming and Diving team, coached by Katherine O'Donnell and Assistant Coach Eric Martell, competed in Section II finals, finishing strongly in 4th place (and only a few points out of third) in a field of 10 schools.

Most Valuable Player: Eaint M. ’22
This player was our #1 singles and doubles player all season. She is a fierce competitor and will battle for every point in every game. She is as graceful with her touch shots as she is with speed on her smashes. She is a team player through and through and is constantly encouraging others and helping them improve. She gave everything she could on the court, and we will remember her in her matches against Mary, battling for every shot from the starting serve to the ending point.  Congratulations to the MVP, Eaint M. ’22.
Most Improved Player: Claire L. ’23
This award was a challenge in that there were many students who showed tremendous improvement over this season. Saying this, this player showed the most improvement and I cannot believe she had not been involved in badminton before this year.  This player did not miss a practice session or match. She came with an eagerness to learn and improve. She was an outstanding teammate and was always encouraging to her peers. She became stronger in all aspects of play, and I cannot wait to see her return for next season. Congratulations to Claire L. ’23.
Crew, Head Coach Robert Tarrant and Assistant Coach Bridget McGivern
Outstanding Novice Rower: Tess L. ’24
Our Outstanding Novice rower is a young lady, new to the team last spring, who tenaciously pulls on every stroke and is always ready for the next challenge, the next practice, or rowing with any crew, any seat.  She wears her game face on the water and her smile on land.  Coach McGivern and Coach Bob are proud to award the Outstanding Novice Award to: Tess L. ’24.
Rising Star: Sol H. ’24
Our “Rising Star” is a rower who attends every practice, ready to work hard, and improve on every aspect of the sport. That xe did all fall. Xyr technical prowess on each stroke is “spot on”.  Xe rows with any crew and any seat with a sense of giving it xyr all.  Xe is certainly a rising star on Emma Crew with a very bright future.  We are proud to present the Rising Star Award to Sol H. ’24.
Cross Country, Head Coach Erin Hatton and Assistant Coach Andy Reed
Rookie of the Year: Tracy C. ’24
Our first award is a Rookie of the Year Award, which is given to a new athlete who has contributed to the success of the team and demonstrated the values of an Emma Willard cross country runner. This athlete was a committed member of the team, had a positive attitude, and supported her teammates. She quickly, yet quietly, made it clear she would be one of the top 10 runners on the team, and she consistently placed in the top 10 each race. She worked diligently at practice each day, whether it was pushing herself in a workout or foam rolling after a run, she was a role model athlete. She was humble about her improvement; she improved her 2.75 mile time by almost 3 minutes over the course of the season, and she even averaged a 7:53 mile pace for her last race, which was faster than her 8:02 timed mile on the first day of practice. For her positive attitude and excellence in her first year of cross-country, the Rookie of the Year Award goes to Tracy C. ’24.
Coaches Award: Sherry H. ’24
Our Coaches Award this year goes to a member of the team who demonstrated the values of an Emma Willard cross country runner and made huge improvements in her running this season. From the first day of practice, it was clear this runner was ready to work hard and do so with a smile on her face. In the first track workout we did, I told several athletes they could finish a lap early if they wanted, but this athlete ran the last lap of the track all alone, so she would get in her full 3 miles of running. This dedication and hard work allowed her to make great improvements in her running times. Her 2.75 mile time improved from 32:20 to 24:18. This athlete also exuded great positivity on the team, happily cheering on her teammates and reminding others of the joy of running. For her positive attitude, hard work, and improvement this season, the Coaches Award goes to Sherry H. ’24.
Swimming and Diving, Head Coach Katherine O'Donnell and Assistant Coach Eric Martell

Coaches Award: Isabelle B. ’23
Our first team award is the coaches award.  Given to a member of the team who best displays the characteristics and qualities of a strong teammate, leader and athlete. The winner of this year’s award has shown extraordinary leadership.  Assisting coaches and teammates alike throughout practices and meets, and voluntarily taking on new responsibilities.  Not only does this swimmer have the top practice attendance record of the season, she was not late to practice a single time-always arriving on deck ready and prepared before 3:45.  Although her coaches are very proud of her improvement this season, they are even more proud of her consistently positive attitude. This swimmer has demonstrated an overwhelmingly positive and upbeat attitude at meets regardless of her swimming results, and regardless of what type of day she is having outside of the pool.  She gives her best effort at each practice and meet no matter what set or event she is swimming.  Not once have the coaches heard a complaint come out of her mouth.  This person shows true initiative in many aspects of her training and leadership role, and provides encouragement and support to teammates in need.  It is for these reasons, (and many others too lengthy to detail), that the 2021 coaches award for swimming and diving is being given to Isabelle B. ’23.