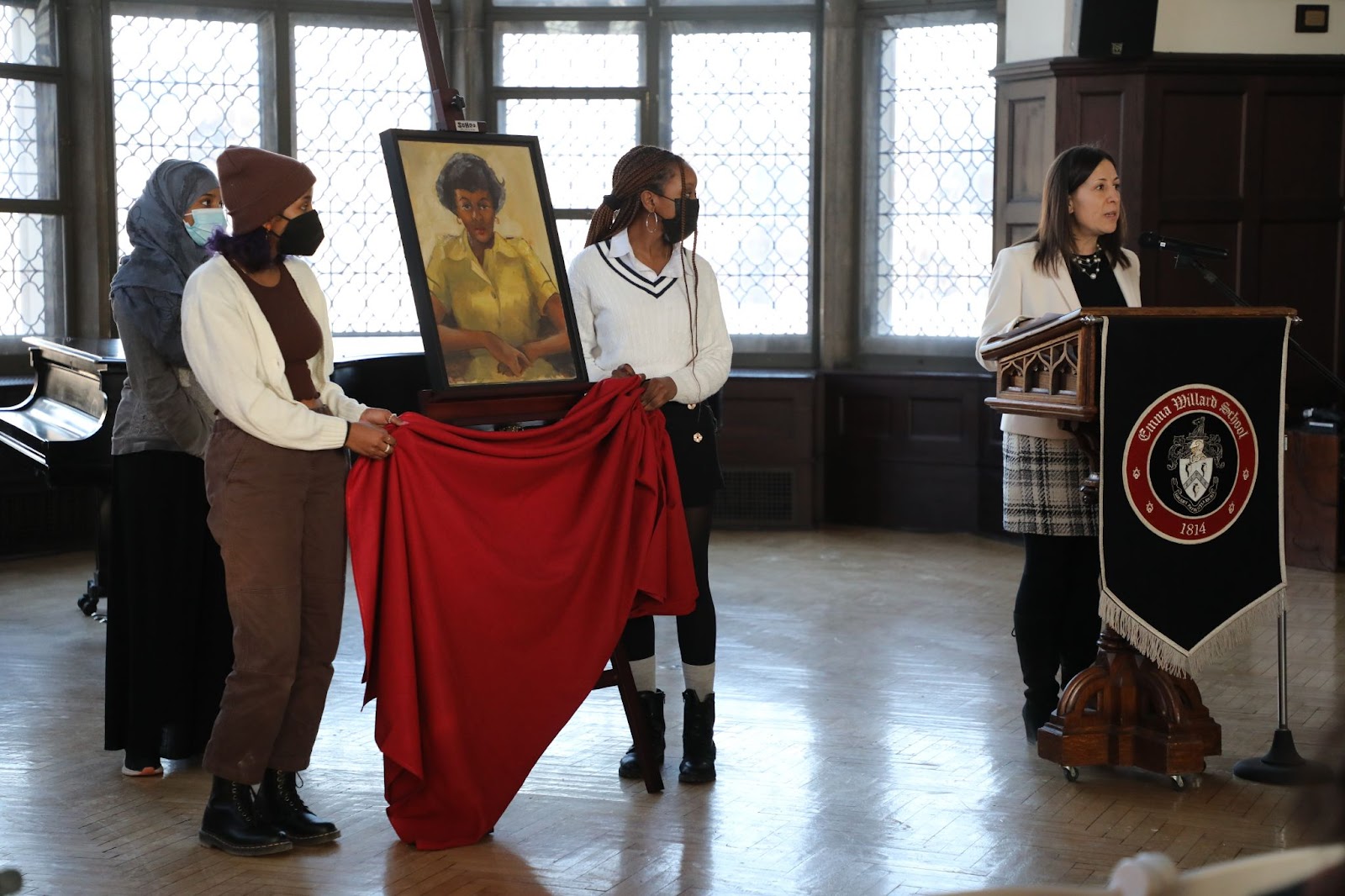 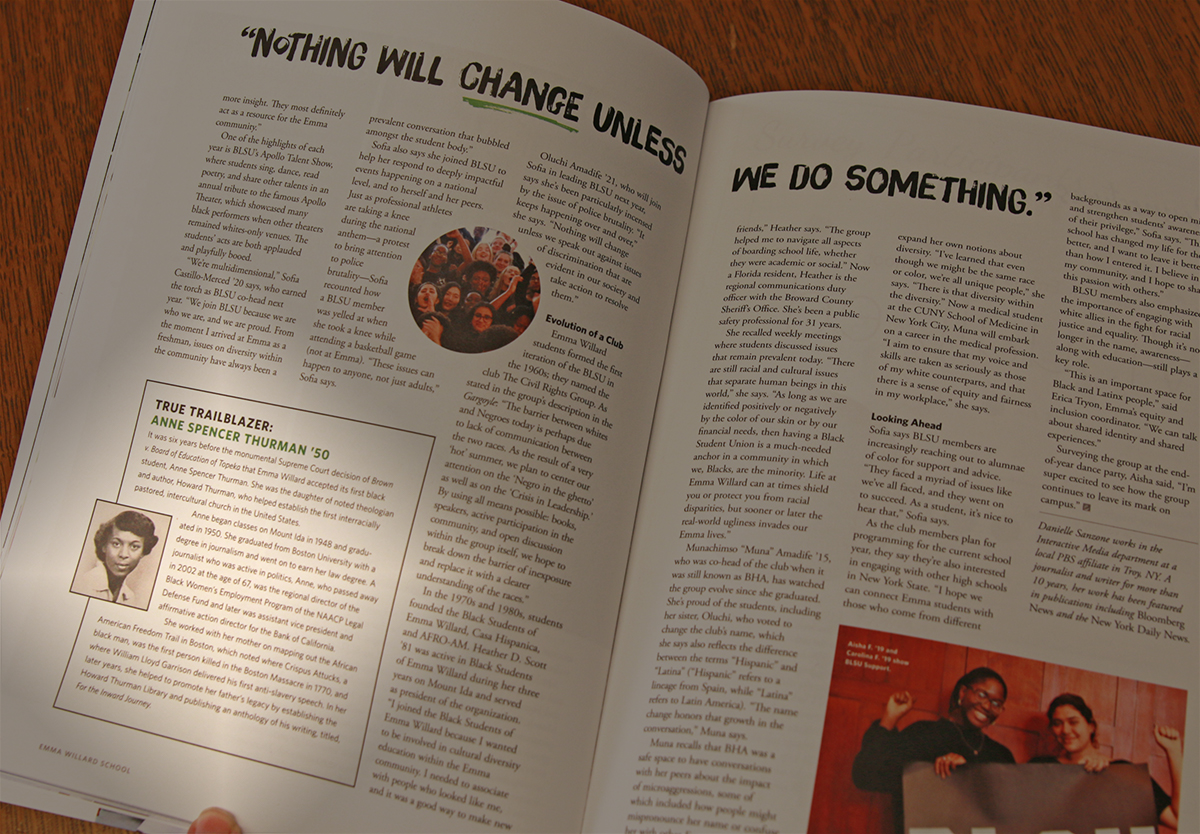 That photo resonated with Janet, who recalled creating a portrait of Anne while the two were students on campus in the late 1940s. Through her beloved artwork, Janet spent much of her time at Emma Willard capturing the people and places and events she encountered. Janet mentioned the portrait to her resident art expert, Sara Kay.
Sara, intrigued, reached out to the school, explaining the connection. A few weeks later we were thrilled to sit down with Janet and Sara. And now, two years later, as we celebrate Black History Month, we are thrilled to accept this generous loan of the portrait to display along with other important historical documents at the school. We are grateful to Janet Ruttenberg for her generosity. 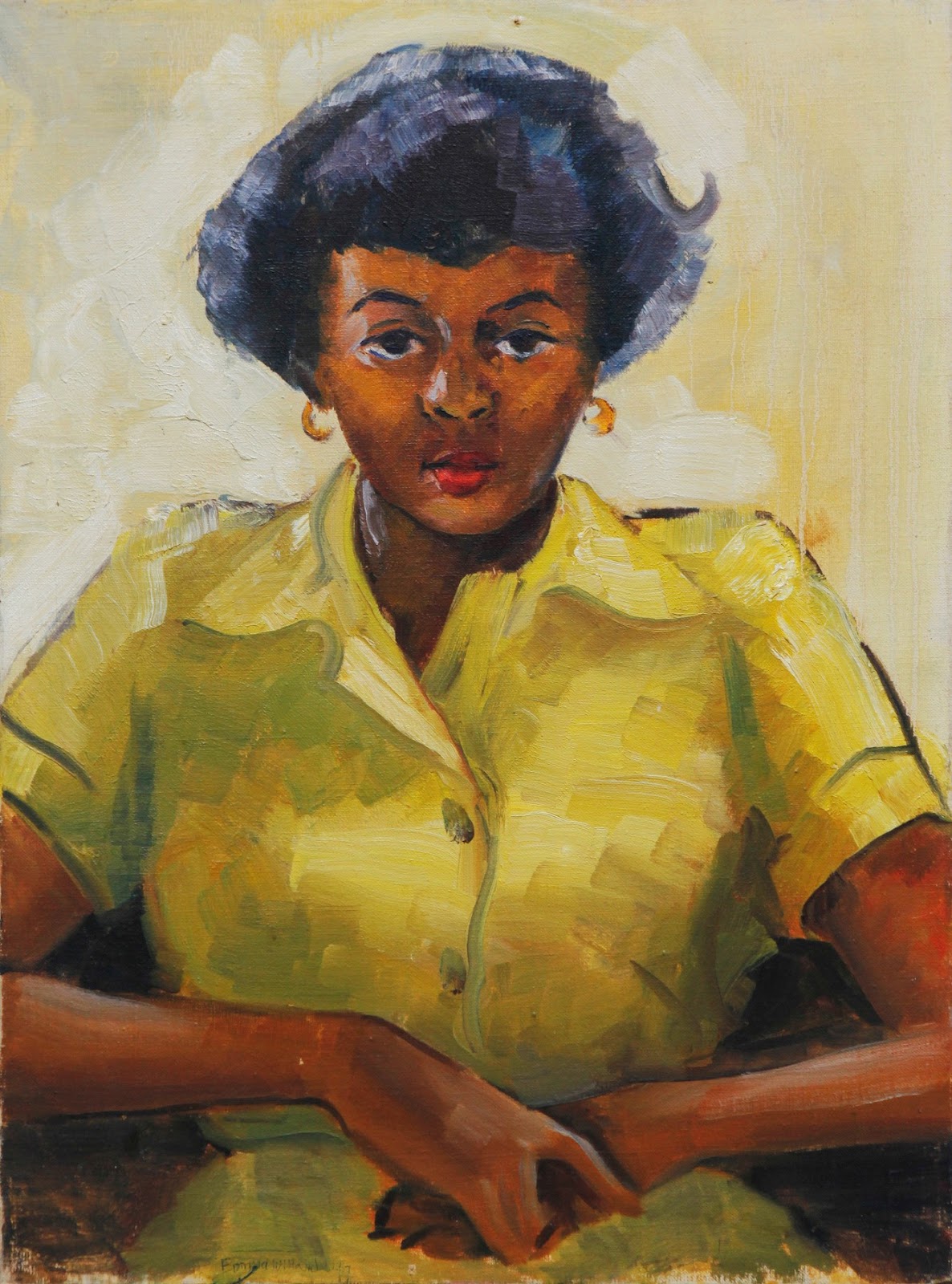 So, who is the young woman captured in this vibrant painting?
Anne Thurman came to Emma Willard in 1948 from San Francisco where her parents founded and led the Church for the Fellowship of All Peoples—the first interracially pastored, intercultural church in the United States, intentionally designed to break through the barriers that separated people on the basis of race, color, creed, or national origin.
Her father, noted theologian Dr. Howard Thurman, and her mother, author, lecturer, and historian Sue Bailey Thurman, were nationally recognized human rights advocates, well-traveled, and immensely curious about world cultures. In 1935, when Anne was a toddler, they led an American delegation to Southeast Asia where they met with India’s emancipator, Mahatma Gandhi, and discussed the power of non-violent direct action as a mechanism for social change.
By the time the Civil Rights Movement took shape in the United States, the Thurmans were central players. Dr. Thurman served as spiritual advisor and mentor to those on the front lines of change, among them Dr. Martin Luther King, Jr. and Marian Wright Edelman.
In his autobiography, Howard Thurman describes the first time he had to explain racism to Anne and her sister. They wanted to visit a playground designated for white children only in a segregated Daytona Beach, Florida—his hometown. When they asked their father why they couldn’t swing on the swings he told them: “It is against the law for us to use those swings, even though it is a public school. At present, only white children can play there. But it takes the state legislature, the courts, the sheriffs and policemen, the white churches, the mayors, the banks and businesses, and the majority of white people in the state of Florida–it takes all these to keep two little black girls from swinging in those swings. That is how important you are! Never forget, the estimate of your own importance and self-worth can be judged by how many weapons and how much power people are willing to use to control you and keep you in the place they have assigned you. You are two very important little girls. Your presence can threaten the entire state of Florida.”
Dr. Thurman was a guest preacher at Emma Willard chapel services in the 1940s. After one service he spoke with Co-headmistress Anne Wellington and told her he would not return until he saw a face in the crowd like his own. Miss Wellington replied that if he brought her such a girl, she would be admitted. Thus his daughter, Anne, became the first Black student at Emma Willard School.
Anne began classes at Emma Willard School in 1948 and graduated in 1950. She went on to earn a degree in journalism and her law degree from Boston University. Anne worked with her mother to map the African American Freedom Trail in Boston, which noted where Crispus Attucks, a black man, was the first person killed in the Boston Massacre in 1770, and where William Lloyd Garrison delivered his first anti-slavery speech. Their work would become the blueprint for the National Park Service's Boston African American Historical Site.
Anne’s career path had plenty of variety: editor of The Liberal Context, the Unitarian Universalist Association's literary magazine; press secretary, speechwriter, and legislative aide; consultant for the California State Assembly; regional director of the Black Women's Employment Program of the NAACP Legal Defense Fund; and later, assistant vice president and affirmative action director at Bank of America.
Anne commented in 1976, “I know I am a rarity in the areas in which I work. I am black, and I am a woman. I have always been the first to do things, so it doesn’t bother me. Always, if I produce, I am accepted.”
Before she died at the age of 67 in 2001, Anne spent 20 years stewarding her parents’ legacy. She was instrumental in guiding filmmaker Arleigh Prelow through the many stages of her father's life when Prelow produced a documentary on Dr. Thurman. Prelow had some revealing insights into Anne's character. "Besides being extremely beautiful, Anne was a very sharp and inquisitive person. She could detect insincerity immediately. She could be mischievous and humorous. She loved playing the piano. At the same time, her father's celebrity could be quite a burden for her because she felt that expectations for her were very high," Prelow noted.
How fortunate we are to have this likeness of Anne Spencer Thurman at Emma Willard School to inspire us to lead a rich and meaningful life. This painting will be displayed in the alcove at the end of our Bicentennial hallway in Slocum Hall. When this beautiful composition catches your eye, remember the journey to justice, equity, and inclusion we undertake each day as a community. I hope you will observe the friends and teachers around you, each unique and full of possibility. In this school community are the trailblazers and changemakers of the future, ready to lend their talents and their bravery to a world that so sorely needs our attention.
View more photos on SmugMug. The following slideshow accompanies the painting display: