2/25/2022
By Melissia Mason
On Wednesday, February 23, 2022 the Emma Willard School community celebrated the 235th birthday of our founder, Emma Hart Willard, with an investment in our current students and a look back at Madame Willard’s impact on education.
Emma Willard School has a long tradition of marking February 23—Emma Hart Willard’s birthday—as a day to be honored and remembered. Early school celebrations of Emma Hart Willard’s birthday included reenactments of her life, complete with period costumes. On her 120th birthday in 1907, Olivia Slocum Sage (TFS 1847) gifted the school with the funds to relocate from downtown Troy and build the beautiful campus we enjoy today on Mount Ida. An Emma Hart Willard birthday reenactment from the 1940s

In more recent years, a Birthday Challenge has been a part of the festivities, with Trustee Challengers matching donations to The Emma Fund. This year’s challenge raised $171,430 in 24 hours. Because each gift was doubled, the 235th Birthday Challenge netted a grand total of $342,860, our most successful single-day Birthday Challenge to date!
A celebration of Emma Hart Willard’s birth would not be complete without acknowledging the incredible contributions she made to education. This year’s evening presentation featured University of Denver Professor of History Susan Schulten, PhD, who has been researching Emma Hart Willard’s contributions to historical graphics and maps for many years. Dr. Schulten’s work is soon to be published in a co-authored book, part of a series celebrating information graphic visionaries.
Before delving into her work on historical maps and graphics, Dr. Schulten painted a picture of Emma Hart Willard’s impact on education. As a child of the American Revolution, she was part of the first generation of girls to be educated outside the home. Even from an early age, Emma was critical of the limits placed on her and other girls. Dr. Schulten showed examples of early work in needlework and painting that would be required as a part of a girl’s education, noting that young Emma saw the work as “useless applications” of these skills and thought these artistic talents could be leveraged for more useful purposes. Although she was the most skilled artist in her class, Emma found her progress in learning to draw such things as human facial expressions was stymied by her lack of knowledge about geometry. But since she was a girl, such advanced learning was not available to her. Emma Hart Willard made it her mission to ensure that girls would indeed have access to the learning opportunities she was denied.
Through the founding of her first seminary in 1814 and her development of “A Plan for Improving Female Education” in 1819, Emma Hart Willard pushed the limits of girls’ education. At the same time, she began advancing her own ideas about how history, time, science, and even morality could be taught through the use of graphics. Dr. Schulten has done a deep dive into archives across the nation in search of all things related to Emma Hart Willard’s work in early textbooks and educational infographics. 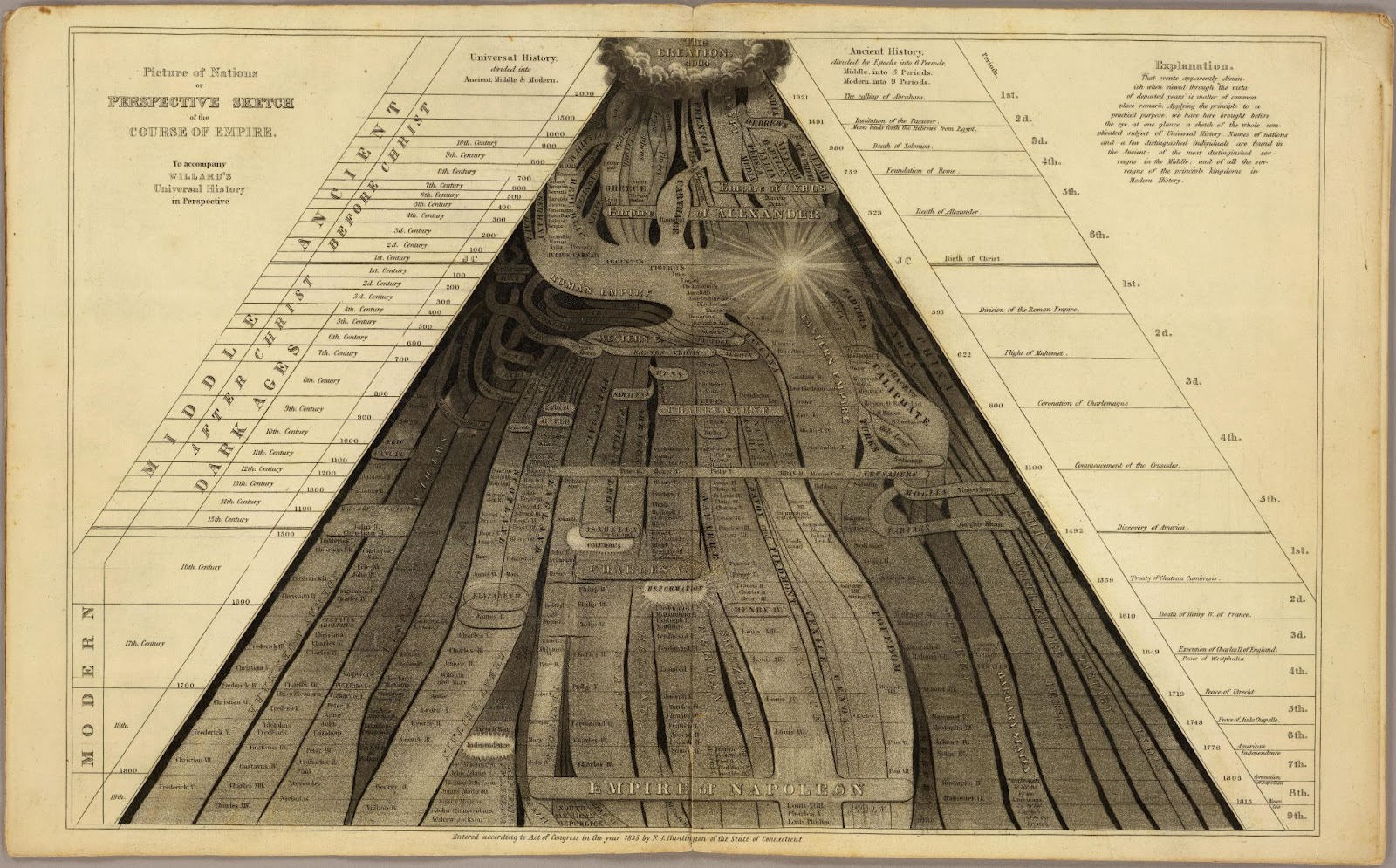 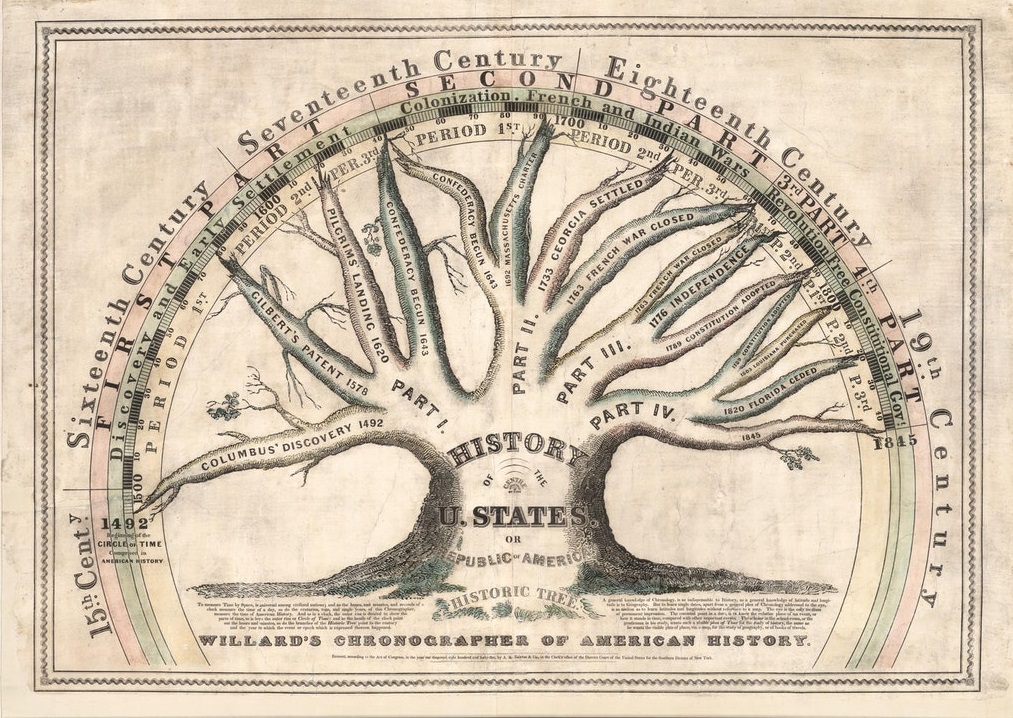 Willard’s Chronographer of American History 1845
As a pioneer in the advent of graphic and visual learning, Madame Willard worked to make sense out of time and history in a time of disruption and expansion in the world. Noting that Emma Willard was certainly a product of her time, Dr. Schulten explained how her bias towards nationalist perspectives on European expansion into the Americas was evident in her maps and graphics. 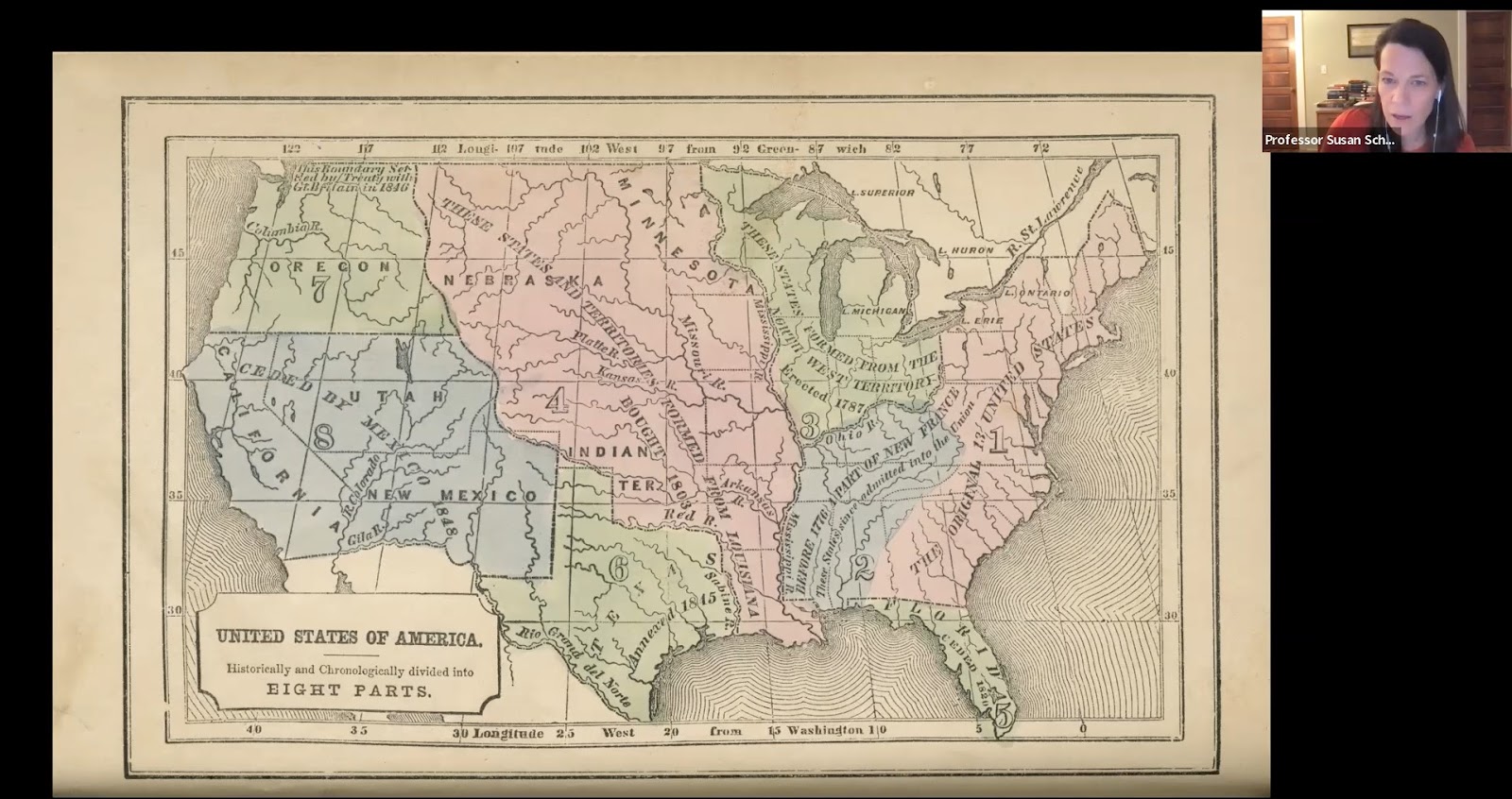 Dr. Schulten explains how this Willard map could be seen as a visual argument for manifest destiny, becoming ubiquitous in classrooms across the country.

After a foray into public education, Emma Willard became concerned about the moral life of children, even publishing a textbook to teach morality in 1857, Morals for the Young or Good Principles Instilling Wisdom. It even included an infographic (one of the last maps Emma Willard created) that would guide the reader away from paths leading to darkness and toward the light. Dr. Schulten points out that the center of the graphic—the place where the key path is chosen—is the school. 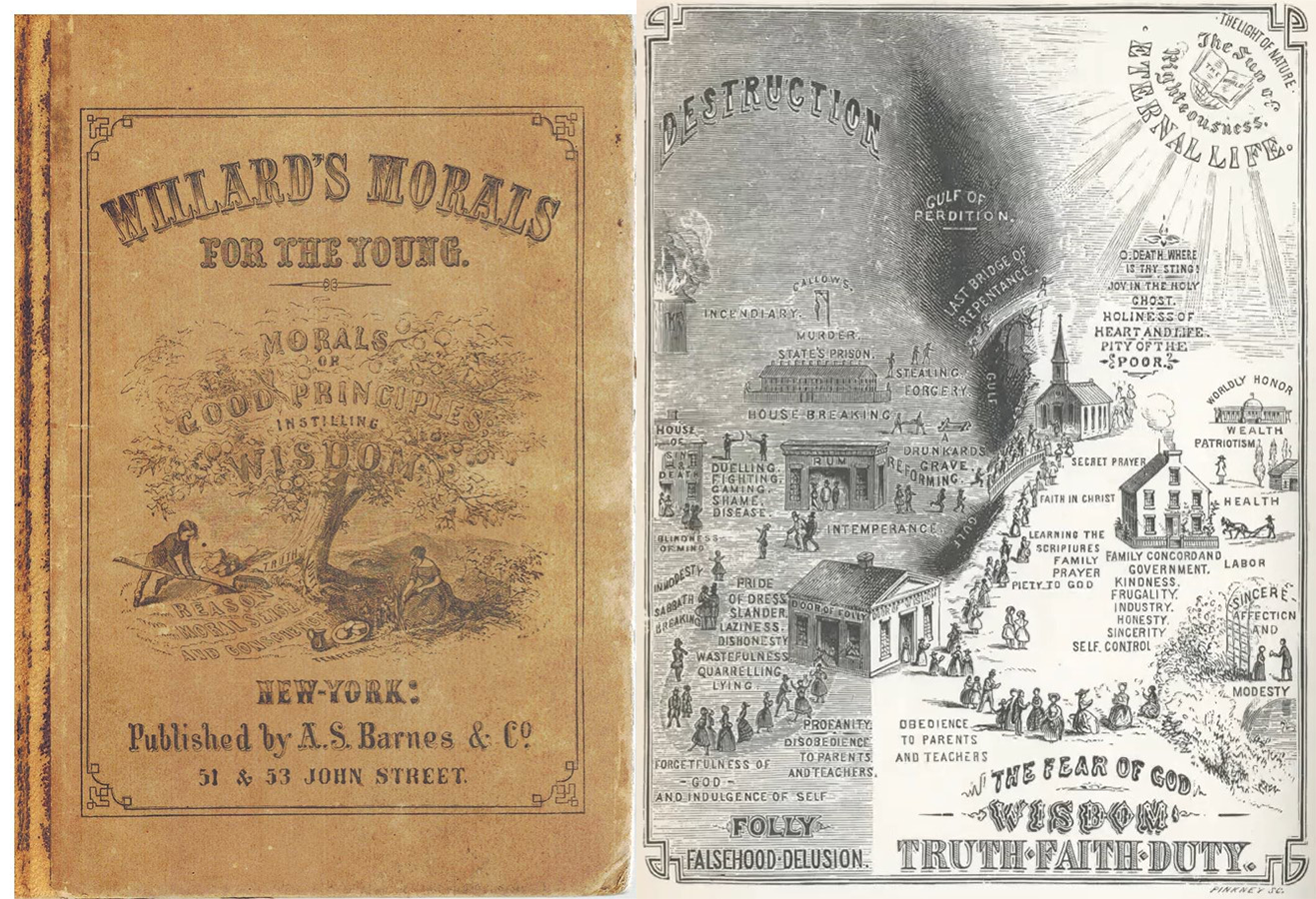 Even beyond her seminary for girls (the precursor of Emma Willard School), Emma Hart Willard left an indelible mark on 19th century education in the United States through her textbooks, maps, and infographics. You can view Dr. Schulten’s entire presentation through the recording posted on the Birthday Challenge page, and read her essay about Emma Willard’s Maps of Time here.
We are thankful to benefit from the legacy left by Emma Hart Willard: a place where rigorous learning meets creativity to prepare students for lives of purpose.