Better to Give Than to Receive?

3/8/2022
By Melissia Mason
The Emma Willard School Theatre department was excited to open Kiggins Auditorium up to students, employees, and families for their winter production of The Giver.
This year’s winter play—based on a dystopian book by Lois Lowry adapted for the stage by Eric Coble—can be described by some as “dark.” The world of The Giver is meant to be a utopia, where there is no pain, but likewise no color, no joy. Community members are assigned their roles in society according to their talents, and men and women are assigned partners according to how well they balance. Yet, Theatre Director Faith Lawson looks beyond the play’s dark tone and sees the message as a deeper one in which the audience finds points of light in the characters’ experience of love.
“In essence, the production is a lesson to us all about what might happen to a world in the absence of love,” Mx. Lawson observes. “I like pieces that comment on society and the way we as humans go through the world and question or don’t question things that come our way.”
In addition to the thematic elements of the play, the script allowed for each actor to have a role in moving the story along. With a relatively small and young cast, there were opportunities for each person to be an integral part of telling the story, without having lines in every scene. “Whatever part they played, it was pivotal to the story and to the audience's understanding of what’s going on in this world,” Mx. Lawson shares.
Mx. Lawson further notes that the students didn’t seem bothered by the darker themes in the play. After reading the script and profiling their characters, students started to dive deep into what was unsaid. “They were finding connections that weren’t spelled out for them,” she shares. As a very inquisitive group, the cast and crew came up with theories about whether characters are reborn or reincarnated and what neighboring communities in this world must be like. “They were very receptive,” she reflects. “They like to go on the edge regarding content, and they are excited by the prospect of surprising the audience.”
Senior Tess J., who was the only upperclassperson in the cast, shares that the heavy subject matter of the play was offset by having such an animated company. “It's bittersweet that this is my last production at Emma, but I am sure I will remember it fondly because of the wonderful cast and crew,” she shares. “I am so incredibly grateful that I got to meet so many of the newer faces at Emma; I don't think I would have if not for The Giver.” 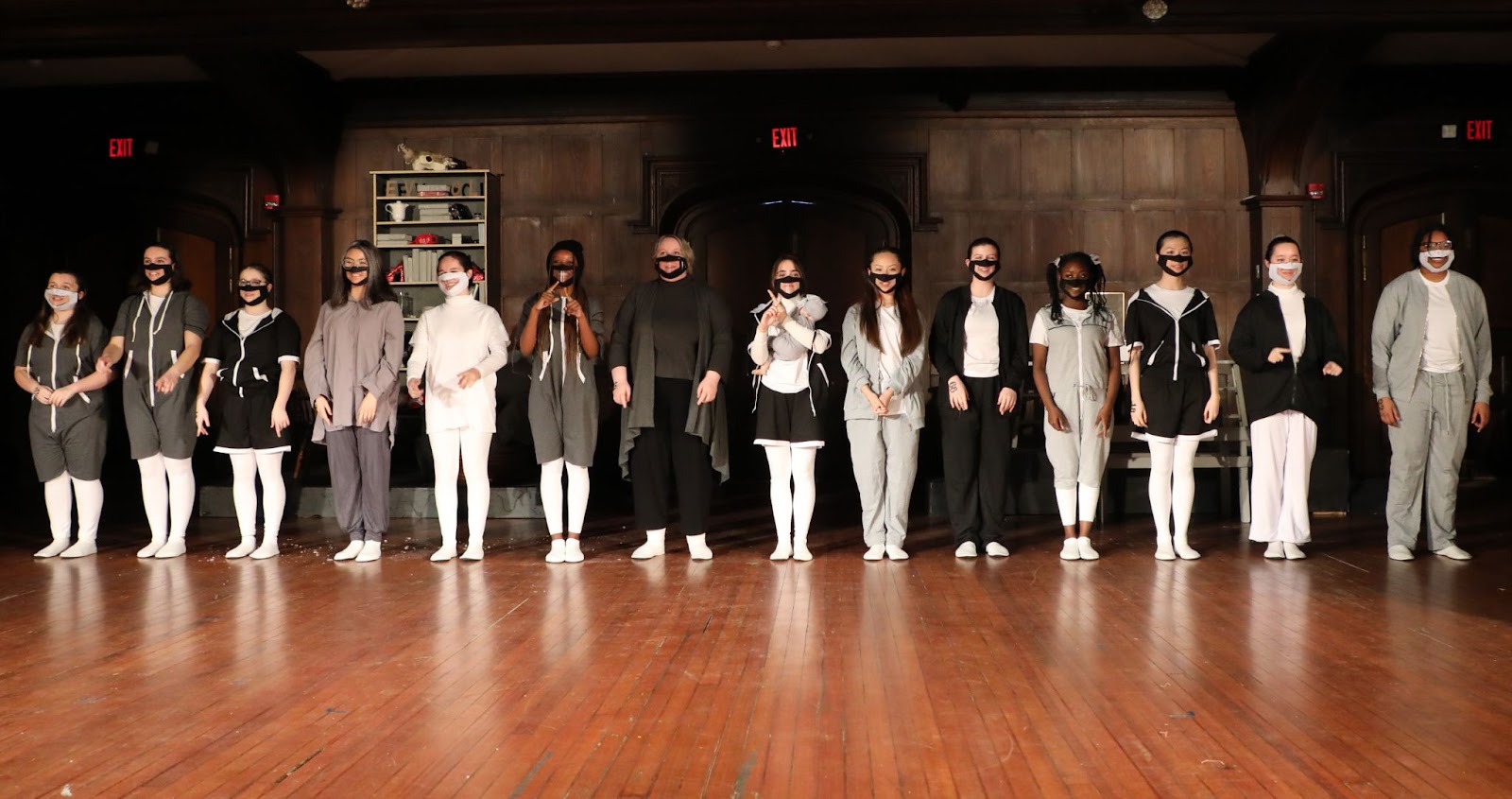 One of those new faces is Isabella H. ’25, who designed the cover art for the program. “I was intrigued by the idea of a snow globe that could represent how the community in the play is extremely sheltered from outside ideas and living in their idea of a utopia,” she explains. “I included houses at the front of the globe to symbolize the community itself, and snowy hills in the background to represent the memories given to Jonas.” Her interpretation of the story also includes blue eyes on a dark background, giving the feeling of always being watched. (See below for Isabella’s full artist statement; beware of spoilers!) 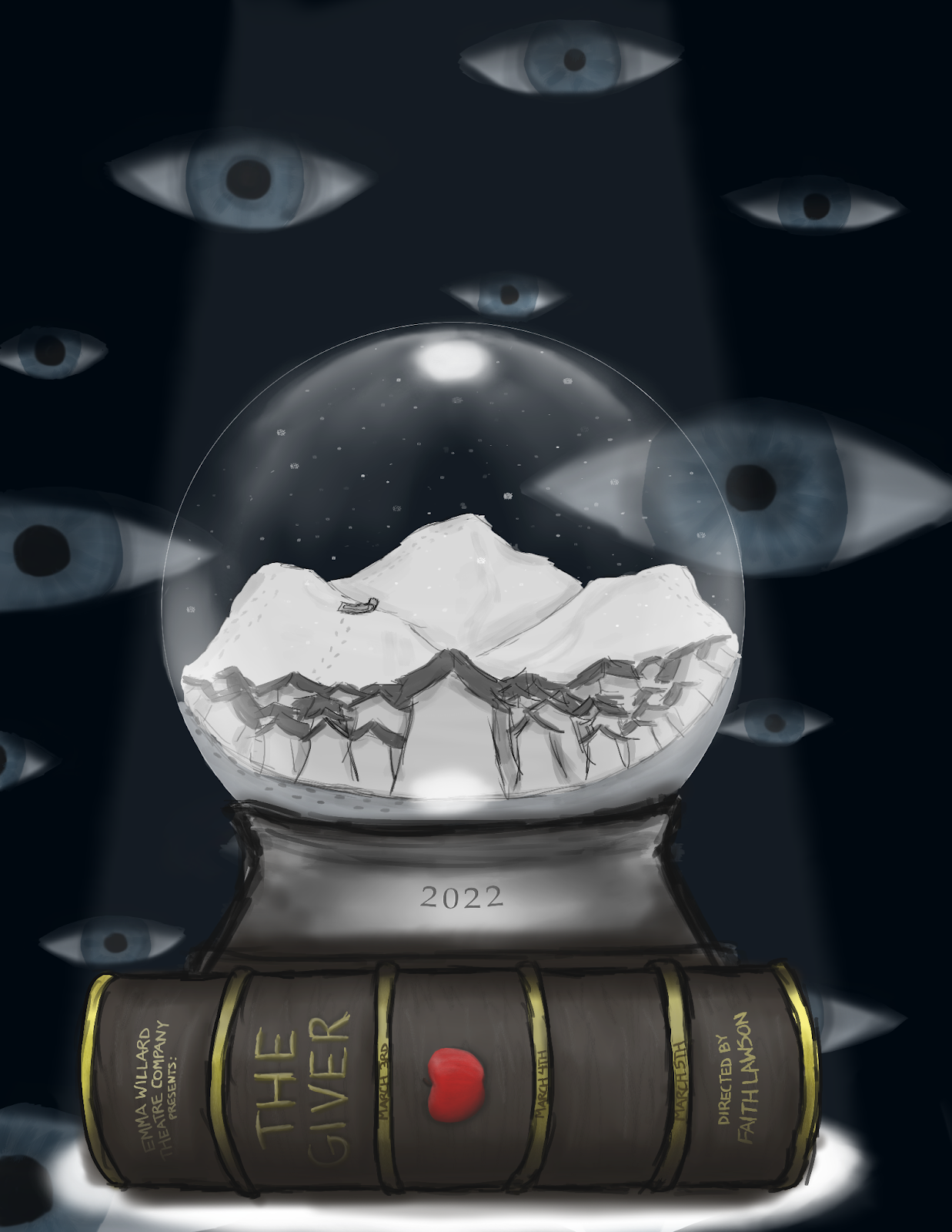 “Whether it’s in theatre productions or in acting class, there is great excitement [among students] about diving into the performing arts,” Mx. Lawson notes. After two years of COVID protocols and quarantines, this was the first all-school theatre production that was open to guests and families since 2020. Students and adults alike were excited to be able to share the experience with the entire community.
Kudos to the entire cast and crew of The Giver for a memorable and thought-provoking performance!

Visit our SmugMug for more photos.
Isabella's full artist statement (spoilers): For the cover art of The Giver program, I chose to draw it with a digital art software called Krita. I used an ink brush on the software because the brush gives a very air texture that layers nicely and has a nice shape, as well as an airbrush to shade the book and the snow globe.
My original idea for the cover art was to have an apple sit on the book rather than a snow globe, but I felt like I could do more. From there, I got some feedback with the idea for the snow globe. I felt intrigued by this idea, as a snow globe could represent how the community in the play is extremely sheltered from outside ideas and living in their idea of a utopia. I included houses at the front of the globe to symbolize the community itself, and snowy hills in the background to represent the memories given to Jonas. The snow in the globe is both a nod to Jonas's escape from the community as well as the "snow" element of an actual snow globe. If you look closely, there are also footprints and a sled on the snowy hills, which further symbolize both Jonas's received memories as well as his escape!
The text on the poster was written sideways on the book to imitate how an actual book's binding would look. It was also a subtle nod to the novel similarly titled The Giver, which is what the play is based off of. The apple on the binding is a reference to Jonas's first time seeing the color red.

To top off the intended creepy feel of the cover, I added blue eyes to a dark background to give the feel of being watched, similar to how the Council of Elders watch the community's children to assign them a job. The eyes are blue because in the novel, Jonas, Gabriel, and the Giver all have blue eyes, differentiating them from the rest of the community.