Finding the Connection: The Ice Dancers

8/24/2022
By JoAnn Gometz
We continue our series of stories (originally printed in the Spring 2022 edition of Signature magazine) highlighting connections between Emma students past and present with ice dancers Polly Sidford Hodgkins ’56 & Victoria H. ’23. 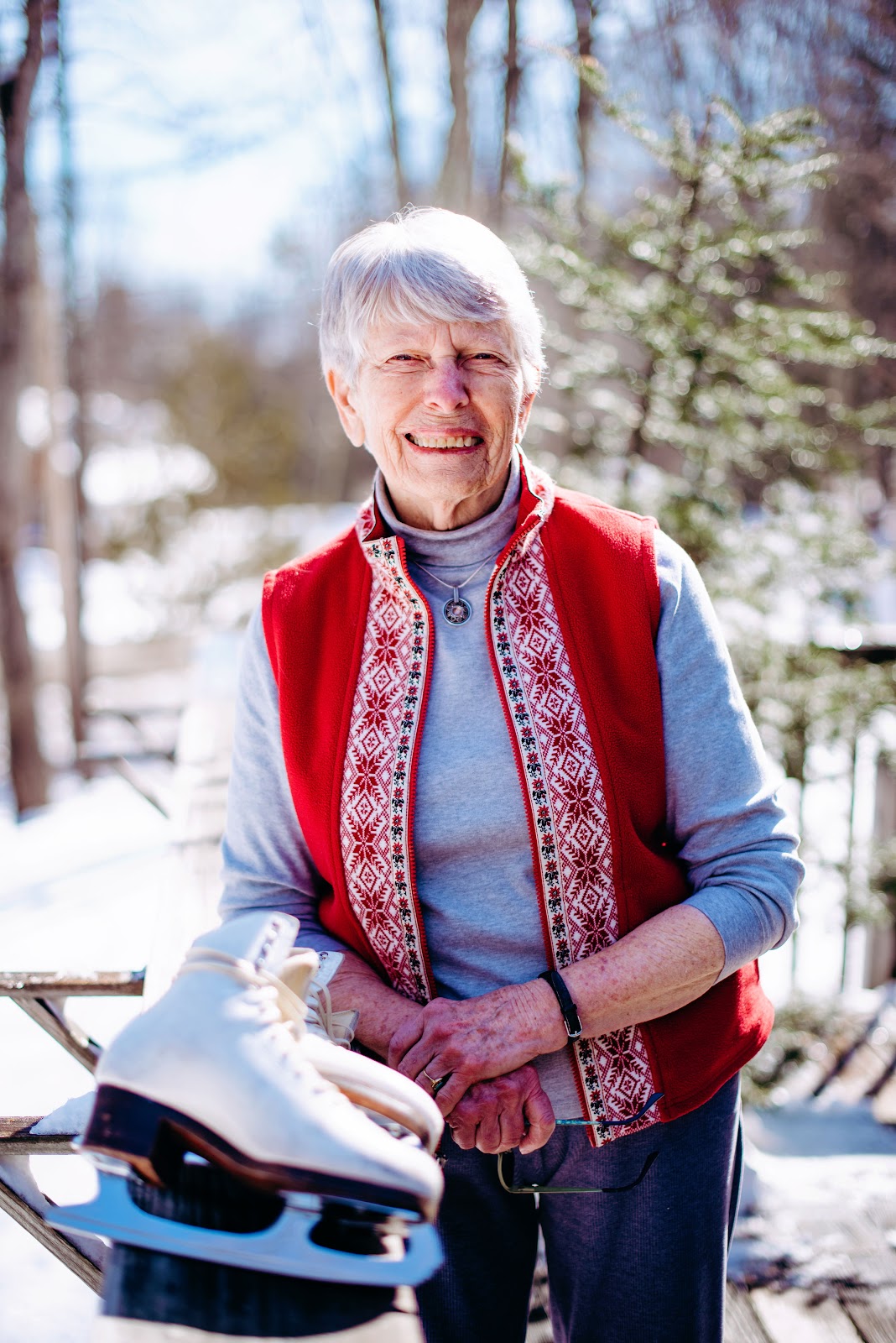 For Polly, who grew up in Troy and attended Emma Willard from third grade through graduation, the figure skating bug took hold when she was 11 or 12, after her parents introduced her to the sport at the Rensselaer Polytechnic Institute (RPI) Field House because “they didn’t know what to do with me.”
The third of her siblings in private school or college in the 1950s, Polly took skating lessons when she could earn enough money babysitting to afford them, narrowing in on ice dancing. She fit in her time at the rink around deep involvement at school, where she sang in the chorus and choir and served on a number of committees, in addition to building lifelong friendships with her classmates.
“That was the best education I could have had. I’m very thankful to have had the opportunity,” Polly says. “I went to Northwestern afterward and it was good, but Emma was excellent. I especially appreciated the history-based curriculum at the time; it was very thorough!”
During her time in college and the early years of her marriage, living in Troy, there was no time for skating. A move to Maine at age 30 changed all that, when a new rink went up in the next town over.
“The technique and approach had totally changed from when I skated previously, but I got stung all over again,” Polly explains. “The rink hired a man with very good basics. It took me 15 years to get all the dance tests out of the way. I went all over the place, staying on any couch that would have me and going through 13 partners, who all got younger, one by one. After earning my Adult Gold Dance Medal, I went on to obtain my Senior Dance teaching credentials from the Professional Skater’s Association, so that I could legitimately teach up through the very same Gold Dances that I had just passed.”
Polly overcame initial resistance from her family, which eased when she gained her credentials to teach skating and could use the funds to help support her continued progress—and passion. She still laces up her skates to teach an ice dancing class one hour per week.
At 40, she achieved the silver dance level, indicating that she had tested her way through competencies in a variety of compulsory dances. She thought she was done.
“I was in Connecticut and cried all the way home,” she says. “Three years later, I was back working toward the next level. Skating is not about the end result; it’s about working through it. When I was 50, I achieved the gold dance level. That’s my proudest accomplishment.” 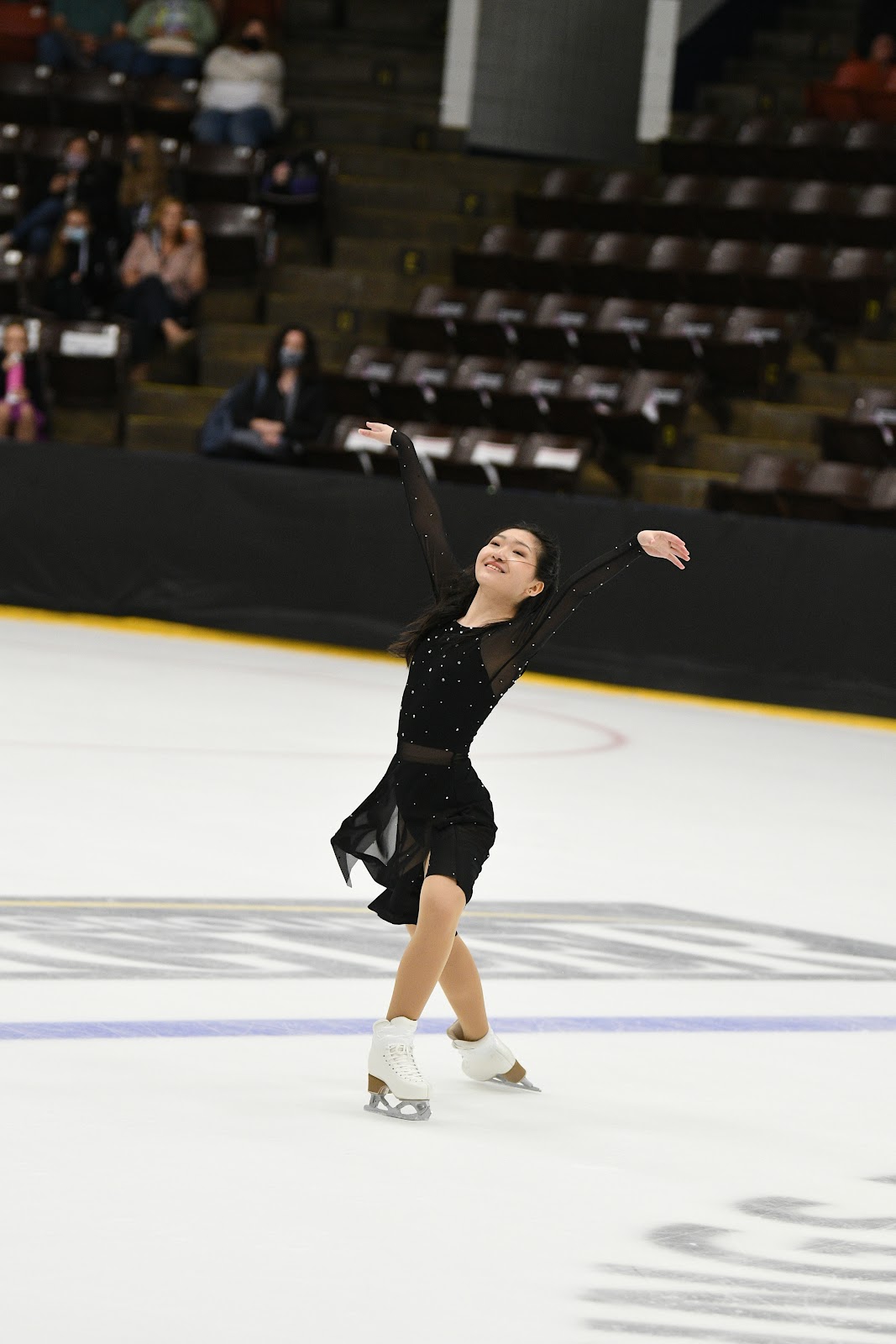 Victoria relates to the long road and sacrifices needed to achieve excellence as a skater. She started at age five, led by her mother’s fond memories of the sport. By age 12, she was competing in singles freestyle skating and had already tested her moves in the field to the gold level. Then, everything changed.
“We moved from Pennsylvania to a part of China with a very hot climate and I took three and a half years off,” she explains. “I came back to skating as a sophomore at Emma and I was having trouble landing triple jumps. That’s when I switched to solo ice dancing instead, and now I’m testing at the pre-gold level in this discipline.”
In fact, Victoria placed third at the intermediate level in the 2021 National Solo Dance Finals. She trains in Delaware whenever time allows, using long weekends and school breaks to spend as much time on the ice as she can. She also practices four days a week in Clifton Park when school is in session.
The pandemic provided its own hurdles, as COVID protocols prevented boarders at Emma from traveling. So, while her dad remained working in China, Victoria’s mom moved to Troy so their daughter could attend Emma Willard as a day student and continue to skate.
Victoria has always wanted to go to college in the US, so her choice to attend Emma is part of that plan. While she tentatively plans to major in biology or a related field—and values the variety of unique courses at Emma that pique her curiosity—her heart remains on the ice.
“Right now, I’m happy going to Nationals and doing the best I can do there. I want to continue skating and competing in college,” Victoria says. “Skating to me is a hobby and a great stress reliever. I’m happy to keep it that way.”