10/25/2022
On Friday, October 21, Emma Willard students, staff, and members of the Board of Trustees joined with representatives from Annum Architects and Consigli Construction to officially break ground on the Alice Dodge Wallace '38 Center for the Performing Arts.
The planned construction will combine a renovation of the school's existing Chapel into a state-of-the-art concert hall and gathering space with a subterranean arts annex facility, providing new practice and exhibition spaces for dance, music, and theater. The $40 million building project is being funded by Infinite Horizon: The Campaign for Emma Willard School, anchored by Wallace’s lead gift of $30 million.
"Alice was devoted to the arts as a way to connect us and to express our shared humanity; we thank her for fueling our ambitions," said Head of School Jenny Rao during her remarks. "This magnificent new space will nurture our most creative and innovative thinking in the arts and become a hub of our campus activity." 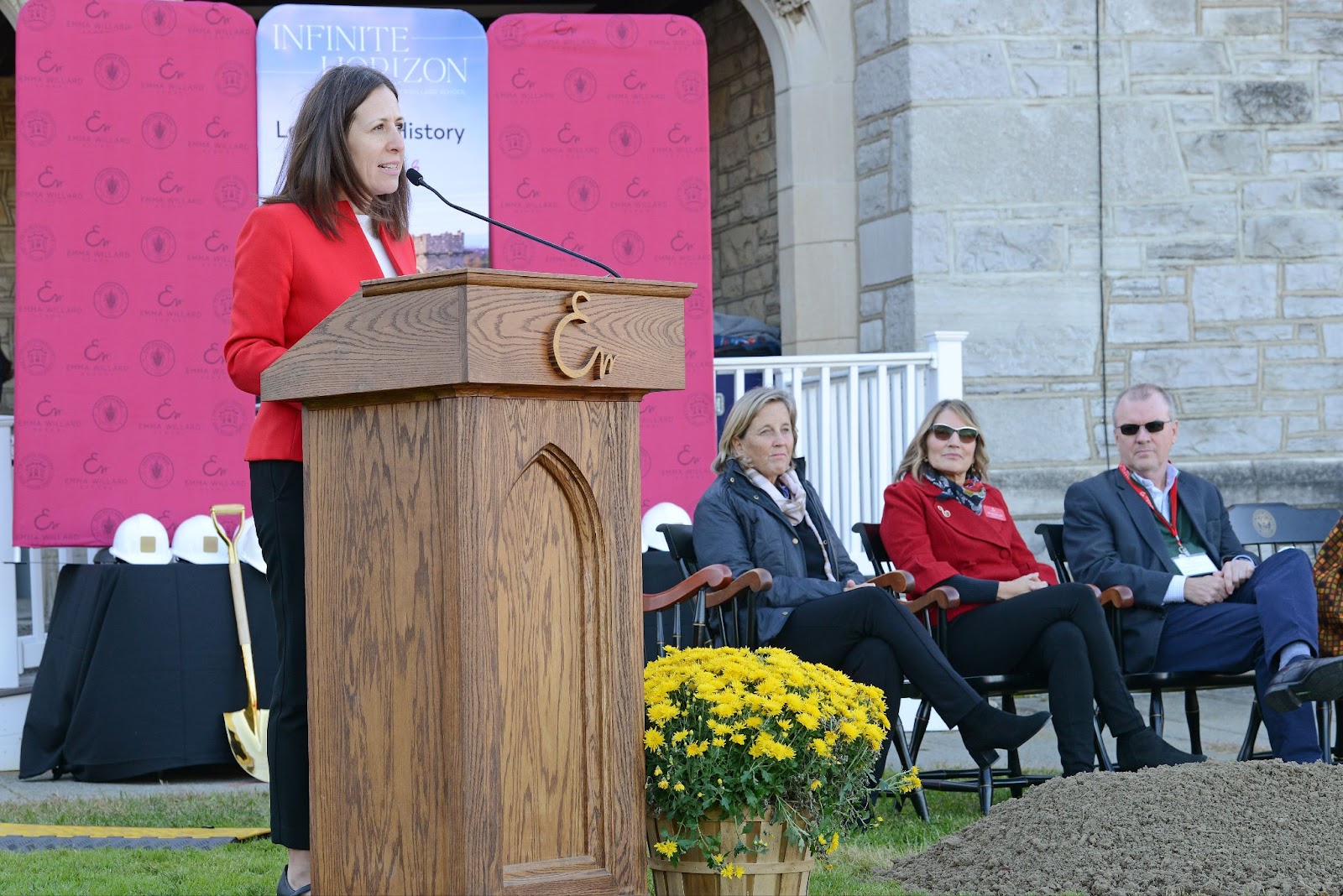 Head of School Jenny Rao speaks at the groundbreaking for the Alice Dodge Wallace '38 Center for the Performing Arts.
Amplifying and strengthening the school's historic strength in the arts is a key priority of Emma Willard's five-year strategic plan, Leading with Purpose, and the Infinite Horizon campaign launched in May of 2022 to fund it. The new Center for Performing Arts will also help further position Emma Willard as a leader in cross-disciplinary instruction through physical and pedagogical connections between departments.
"At Emma Willard, we have demonstrated the wisdom and efficiency of re-energizing historic spaces and introducing new purpose to underutilized space. We do the same with this project," said Lisa Allen LeFort '72, Chair of the Board of Trustees. "This project will not only strengthen our facility and capacity but will help to re-engage alumnae and inspire them to return here to Mount Ida for performances, gatherings, and symposia." 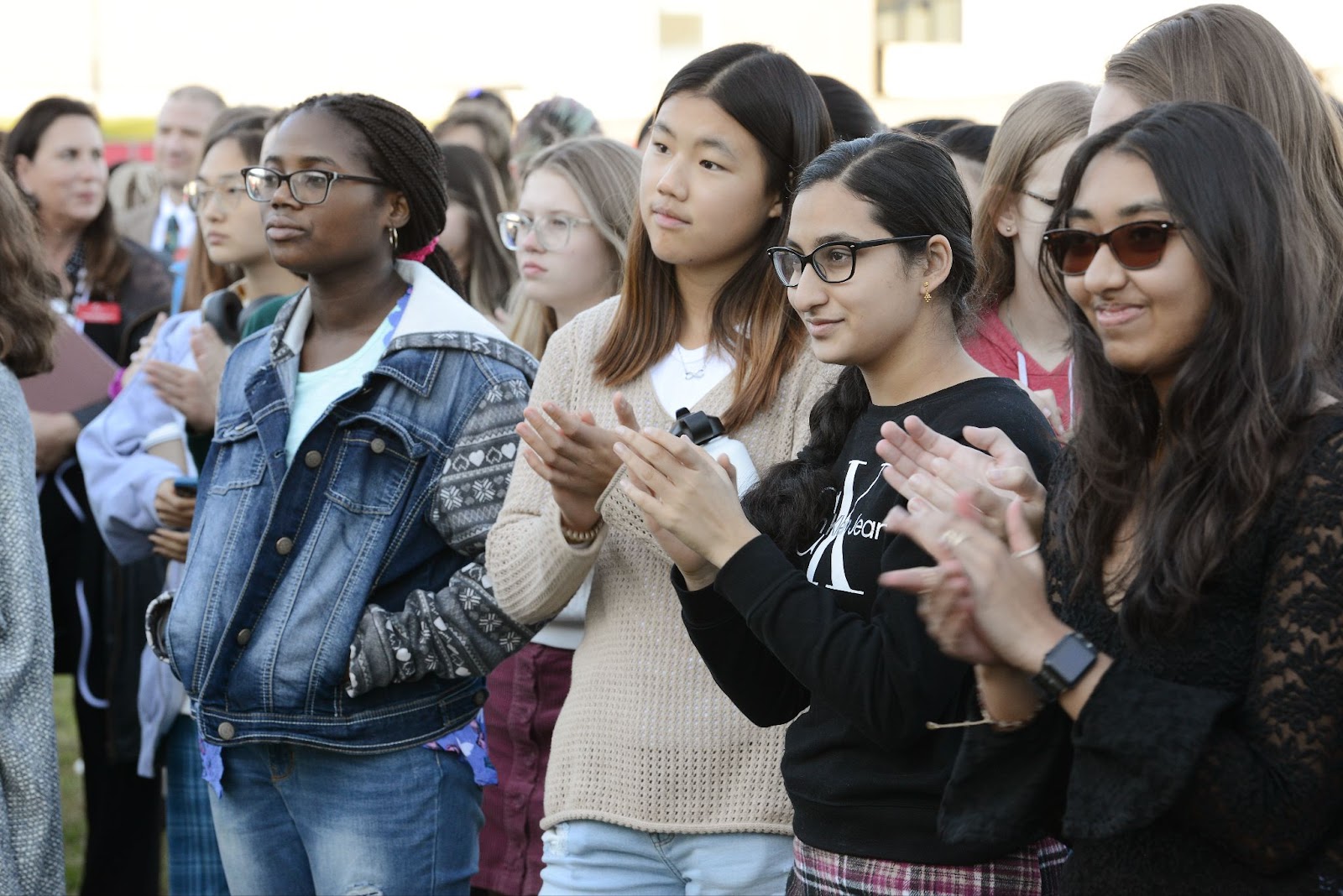 Emma Willard School students at the groundbreaking ceremony.
The new construction will connect practice and performance spaces for dance, music, and theater with those for visual and studio arts in the adjacent Snell-Dietel-Maguire building complex. Space is also planned for the entire Emma Willard orchestra to practice and perform, something long missing in the school's physical plant and much celebrated by arts faculty.
"We are particularly excited that the performing arts will have teaching and rehearsal spaces that are dedicated to each discipline," said Dr. Debra Spiro Allen, Julia Howard Bush Instructor in Music and chair of the arts department. "The orchestra will finally have a home of its own, maintaining adjacency to our existing practice rooms and the Maguire Auditorium in the Snell Music Building."
Tim Winstead, co-chair of the Board of Trustees Facilities Committee, spoke on behalf of the Committee and praised partners Annum Architects (formerly Ann Beha Associates) and Consigli Construction for their collaboration in a "smart and historically sensitive renovation." Winstead highlighted the great lengths taken to preserve key building features such as the Noack pipe organ, original leaded and stained glass windows, and the wood trusses supporting the Chapel ceiling. He also emphasized sustainability as a key part of the modernization process, achieved through a combination of utilizing existing space, improved technology, and the below-grade annex facility with its green roof.
The plan for this thoughtful construction, renovation, and historic preservation was designed by Ann Beha and her team at Annum, formerly Ann Beha Associates. Specifically addressing the students gathered at the groundbreaking, Beha encouraged them to engage with the construction crew that would forge the future of this campus. 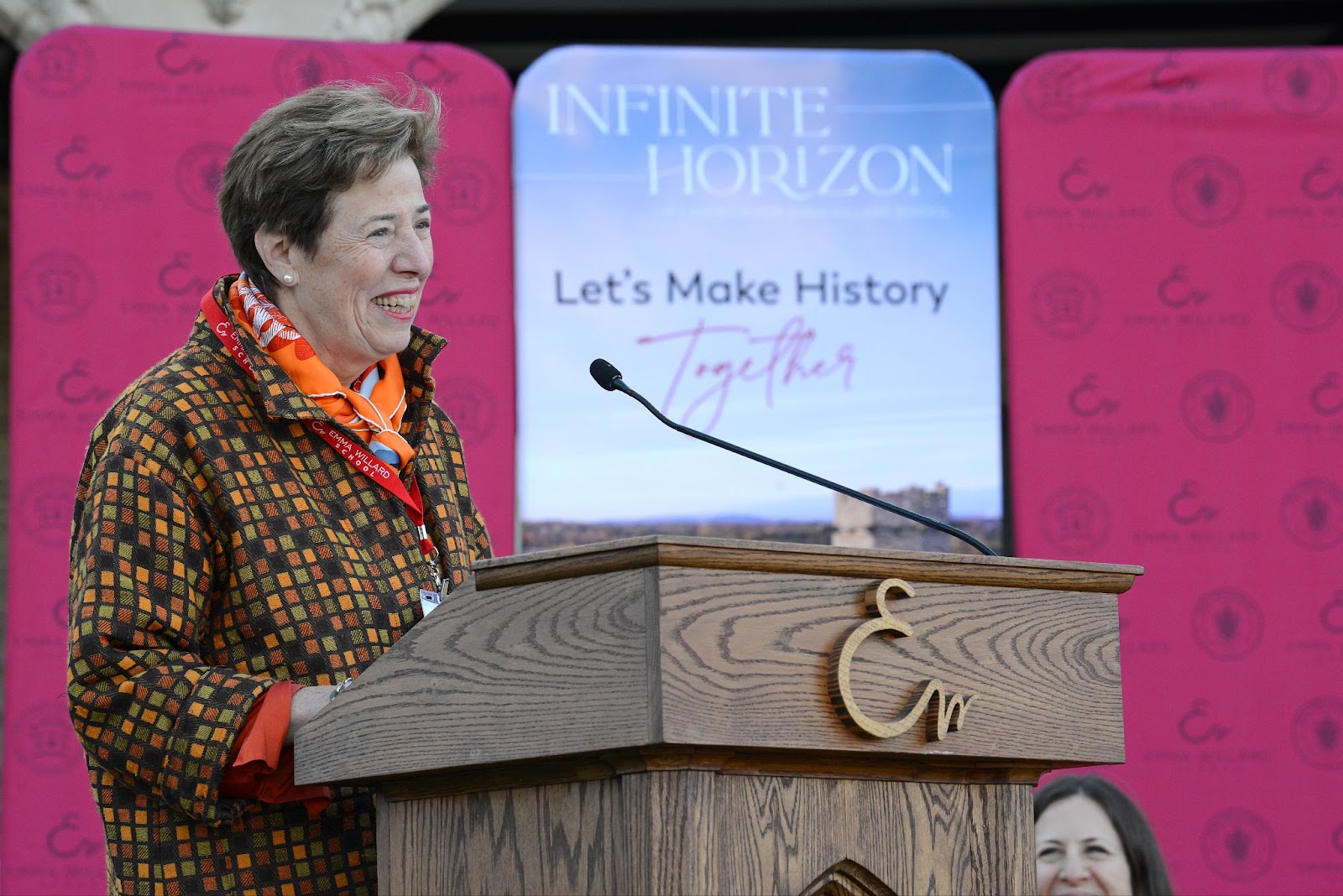 Ann Beha speaks at the Alice Dodge Wallace '38 Center for the Performing Arts groundbreaking.
“In the coming months, you may experience disruption…in architecture, we call that progress,” quipped Beha. “This building will not be made by machines; this is a building that will be made by people. I hope all students will have an opportunity to meet some of those people because they know what they are building for you is special. It would be special as a place for their own children and it’s very special as a place for you. And they will believe that because they are doing it you will go on to do something even greater.”


To learn more about the Alice Dodge Wallace '38 Center for Performing Arts and the Infinite Horizon campaign, visit: infintehorizon.org