11/1/2022
Kaitlin Resler
Emma Willard School is full of traditions: ring ceremony, Revels, the senior triangle, and more. But another celebration looms, and creeps, into the fall season. Emmaween stands by itself against the hills, holding antics within.
Halloween morning is a special treat on the Emma campus, as our community heads to the dining hall, to classes, and to meetings in all manner of strange and serious garb: princess, first responders, a gaggle of grandmas, several chitons and togas, Mario & company, a few Kate Bush impersonators, many Victor Perkinses, Tobias Fünke, a poultrygeist, the math department as Laszlo Bardos (including Laszlo himself dressed as someone dressed as him), some gatorades, sriracha, Gossip Girls, faeries, angels, devils, and a hot dog. Throughout the day, the official Emma Willard Instagram hosted a takeover from Bailey L. ’23, giving the students’ eye view of activities on Emmaween! 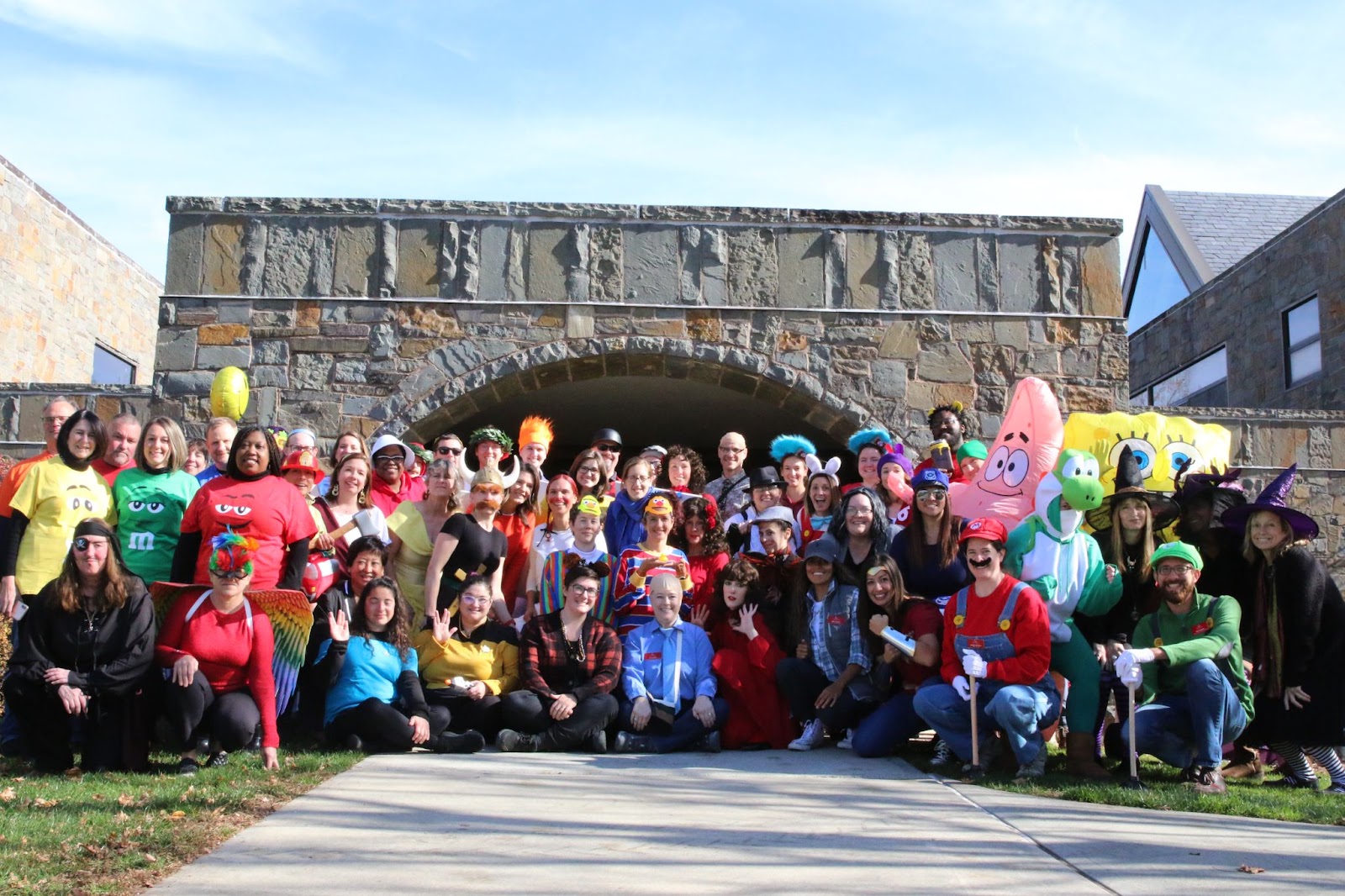 The annual EMployee Emmaween  photo, this year’s theme centered around dynamic duos and famous groups.
Morning reports hosted a lip-synch battle with a Monster Mash dance winning, though the Mystery Gang put on a spook-tacular show for their entry. More than one conversation noted the feeling that more students and EMployees than ever were decked out in some variety of costume, lending just a little bit of jester-inspired chaos to an otherwise regular Monday. 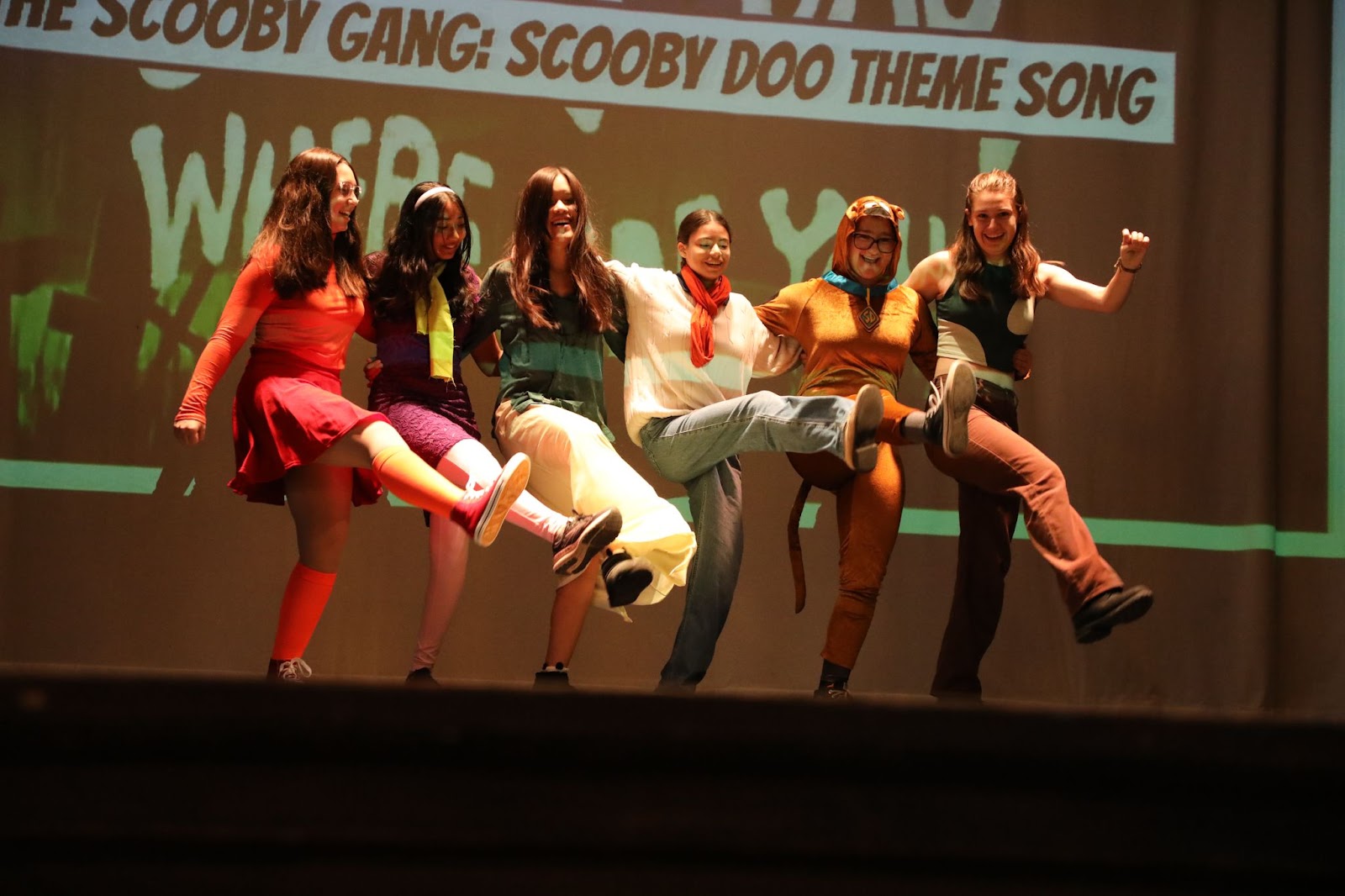 Kellas Dining Hall, decked out for the day with carved pumpkins and festive painted rocks by Darlene, offered candy corn Rice Krispie treats, pumpkin cookies, and more for this most special of Emma celebrations. 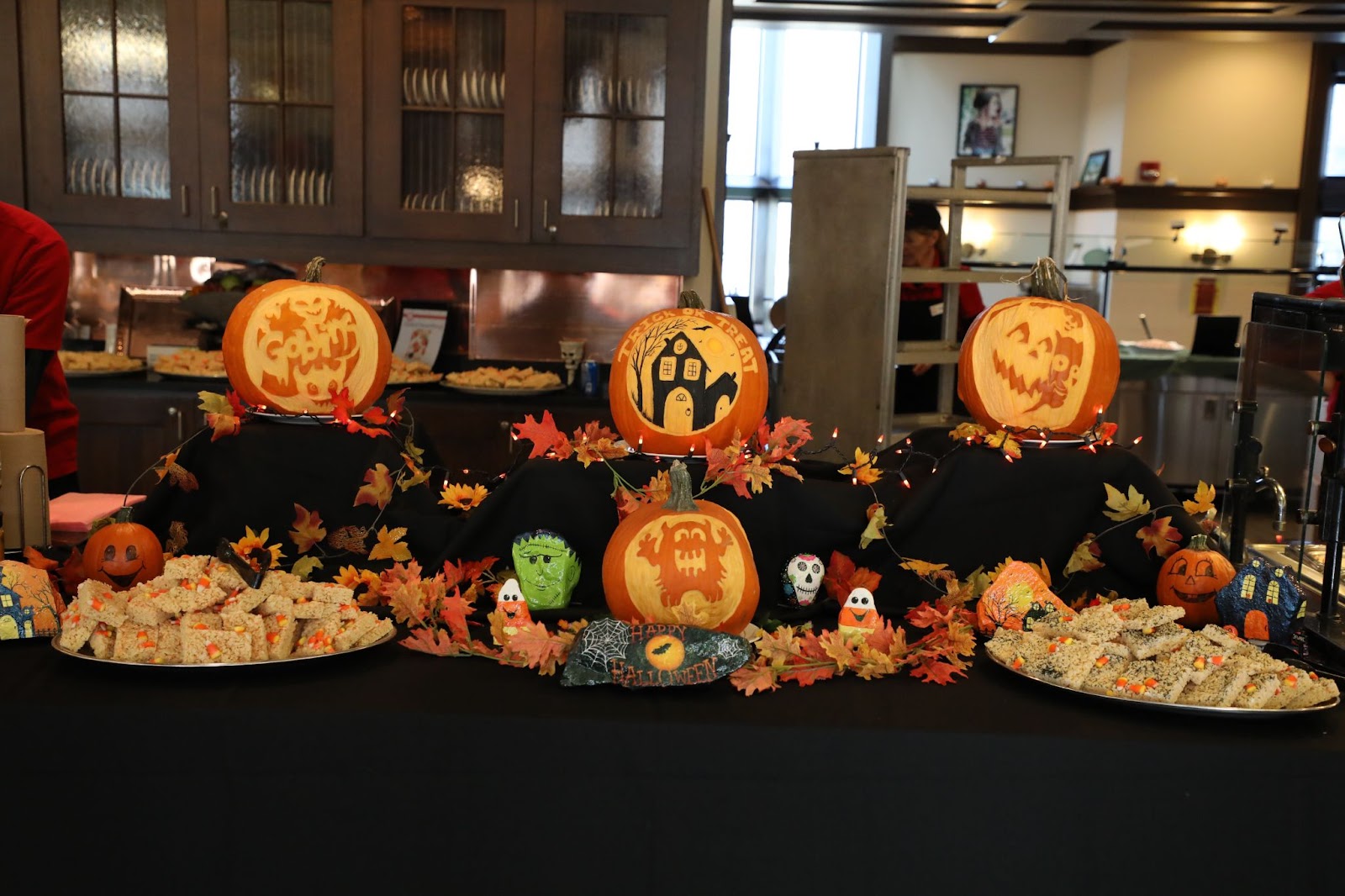 A stunning display by EmmaDining. 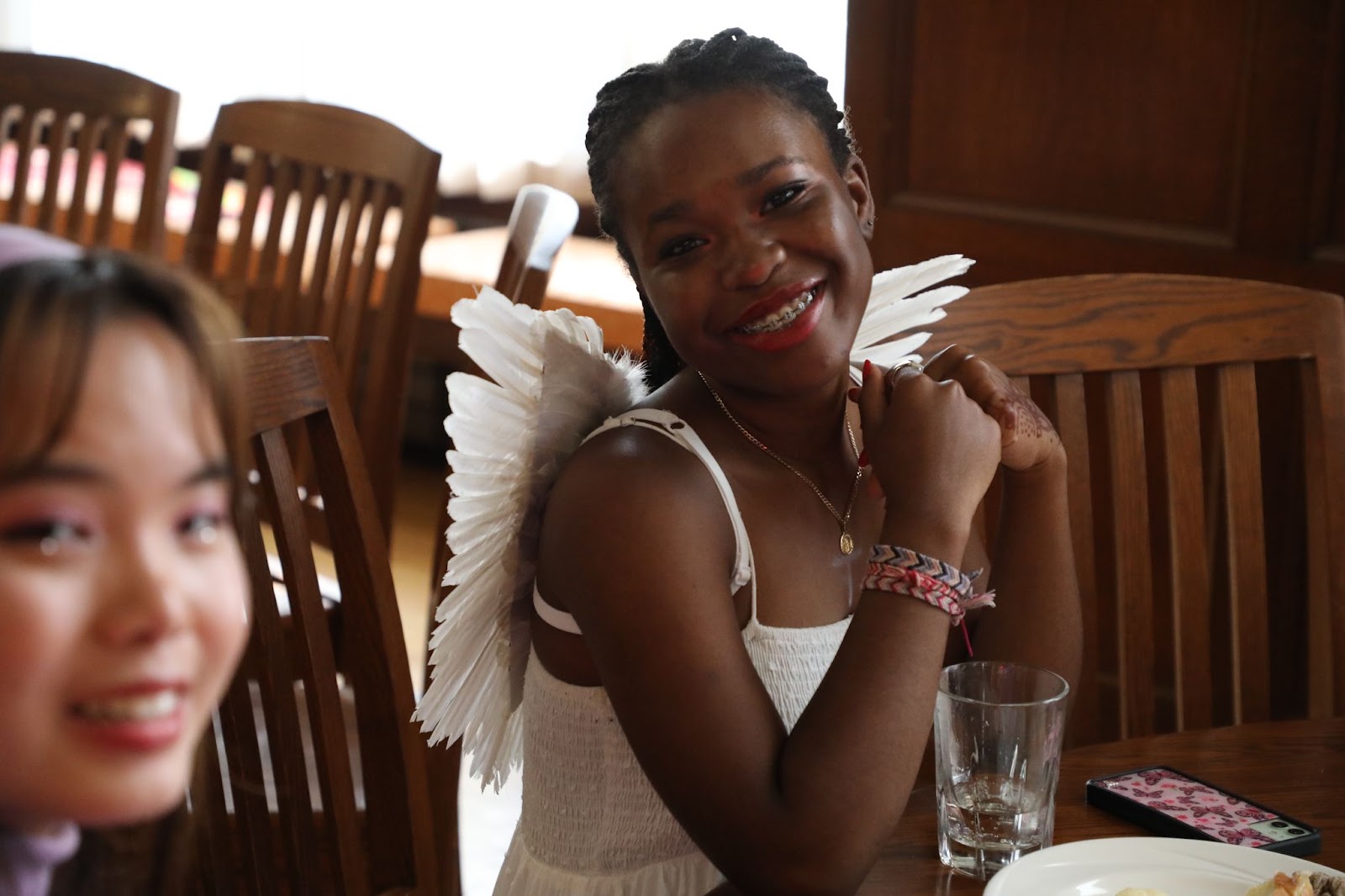 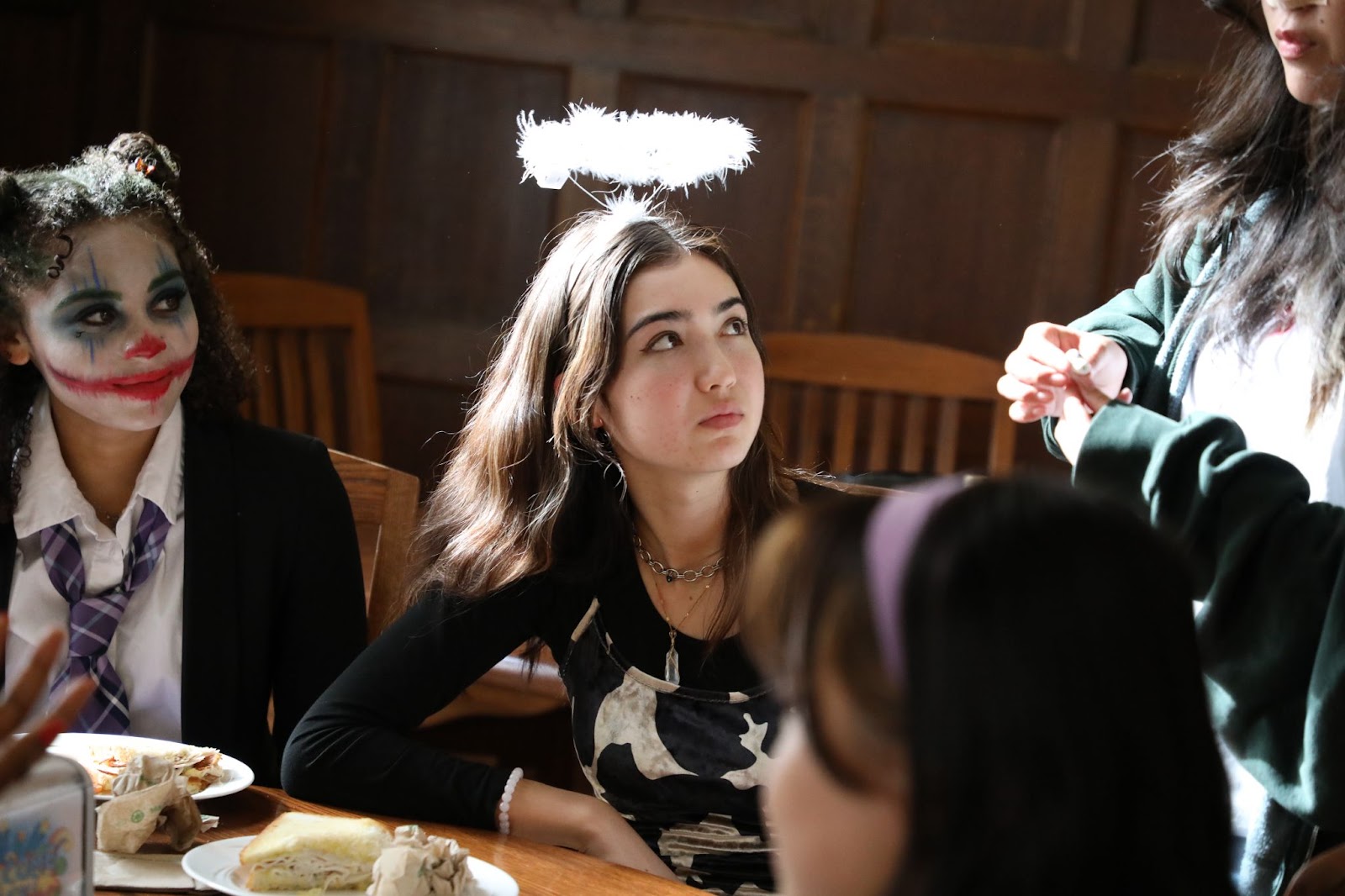 Angels in the dining hall!
As the sun set and the ghoulish hours started to descend, the celebrations began in earnest: beloved fried foods made their way ontoon to plates, buckets of candy soon were emptied, and the SDLG sponsored costume contest began! Parading through the lower dining hall, attendees showed off their costumes to an enthusiastic crowd while the panel of judges deliberated (the winner will be announced at Morning Reports on Friday). 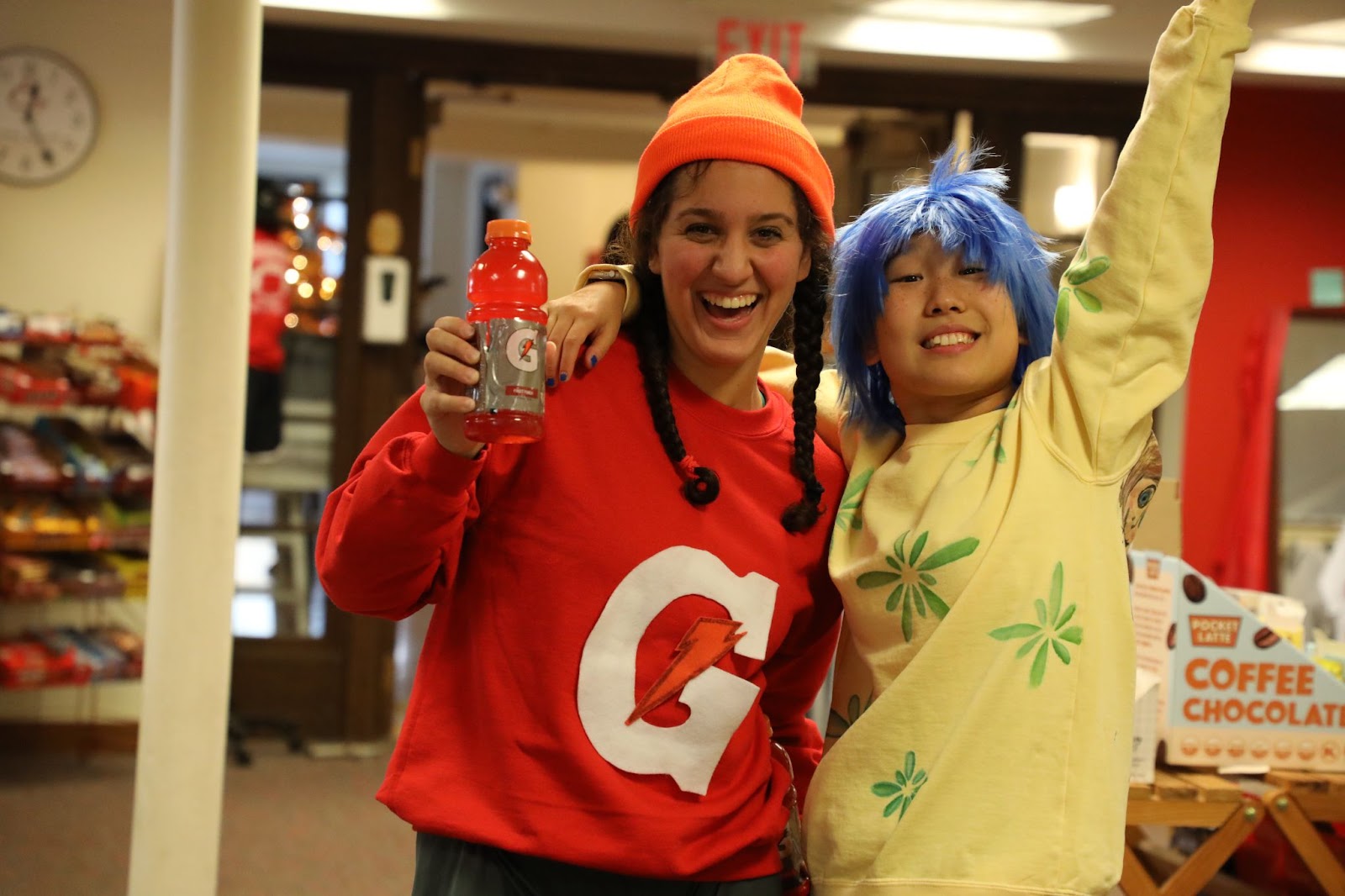 Visiting the school store for some Gatorade, dressed as Gatorade! 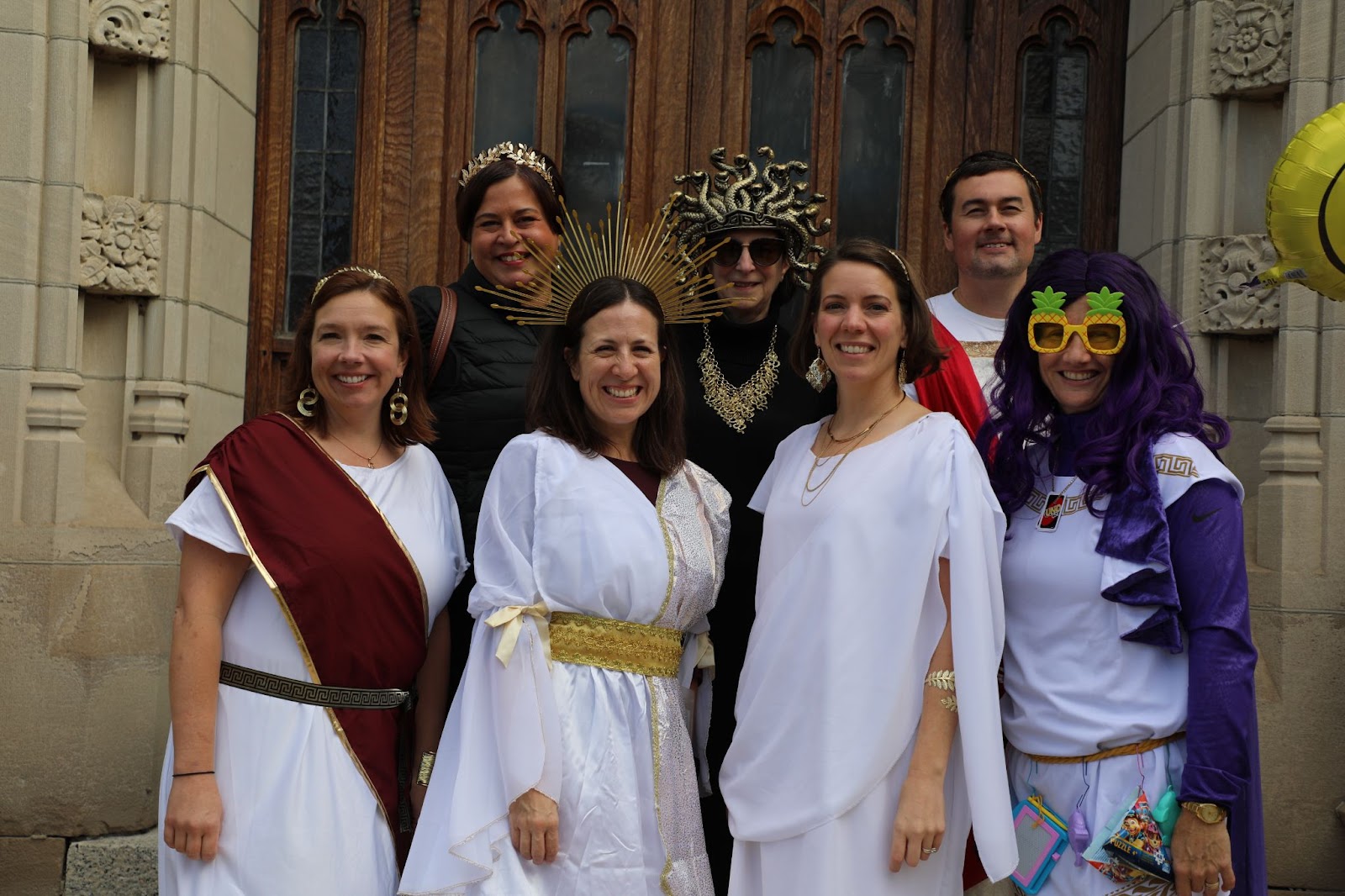 The Admin team, dressed as gods/goddesses. 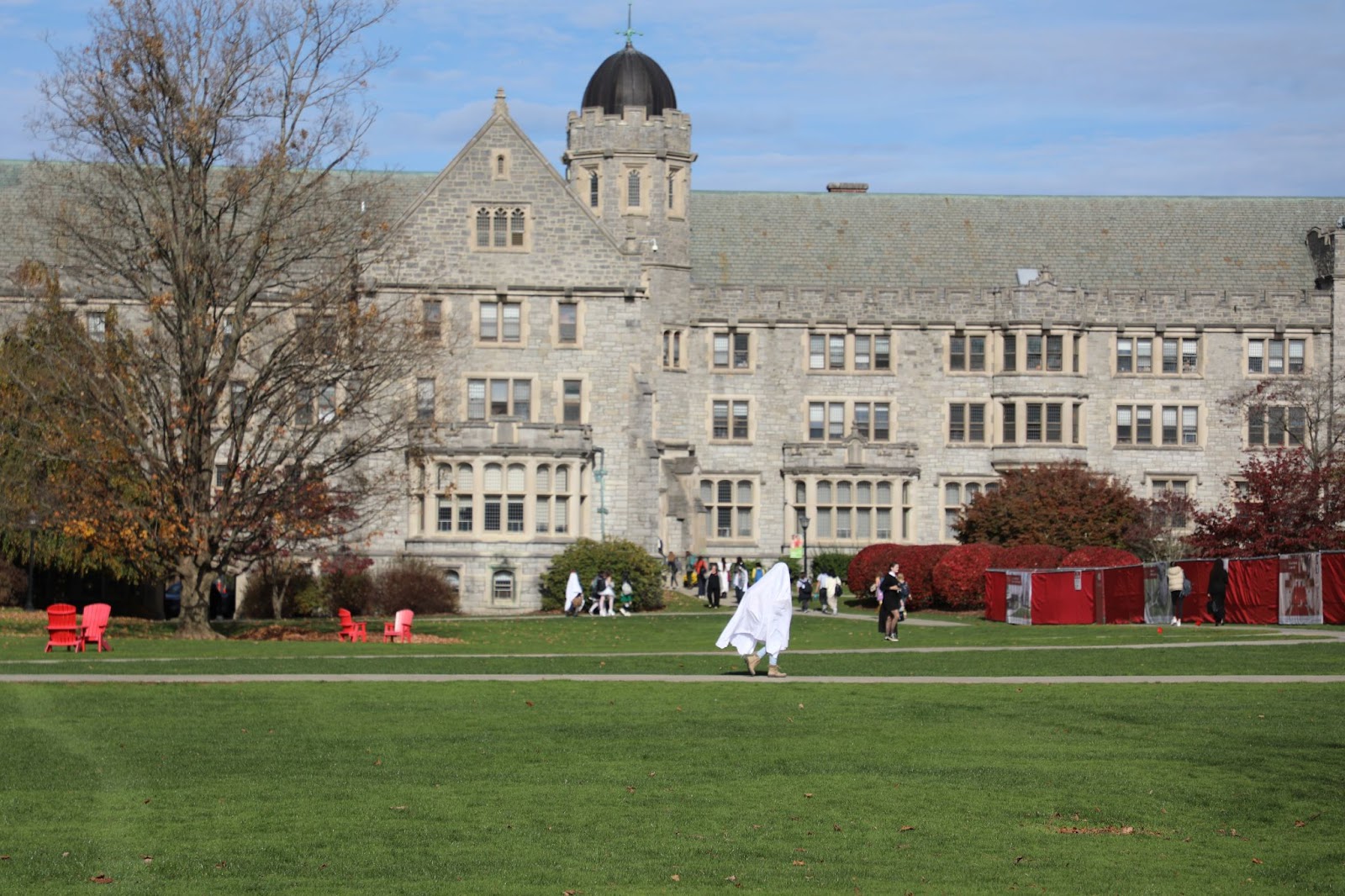 A ghost makes its way across inner campus.
Filing out of Kellas, students made their way through the map of trick-or-treating on campus, entered the haunted house, enjoyed a movie with the Wellies, or the school council sponsored bonfire on the senior triangle. 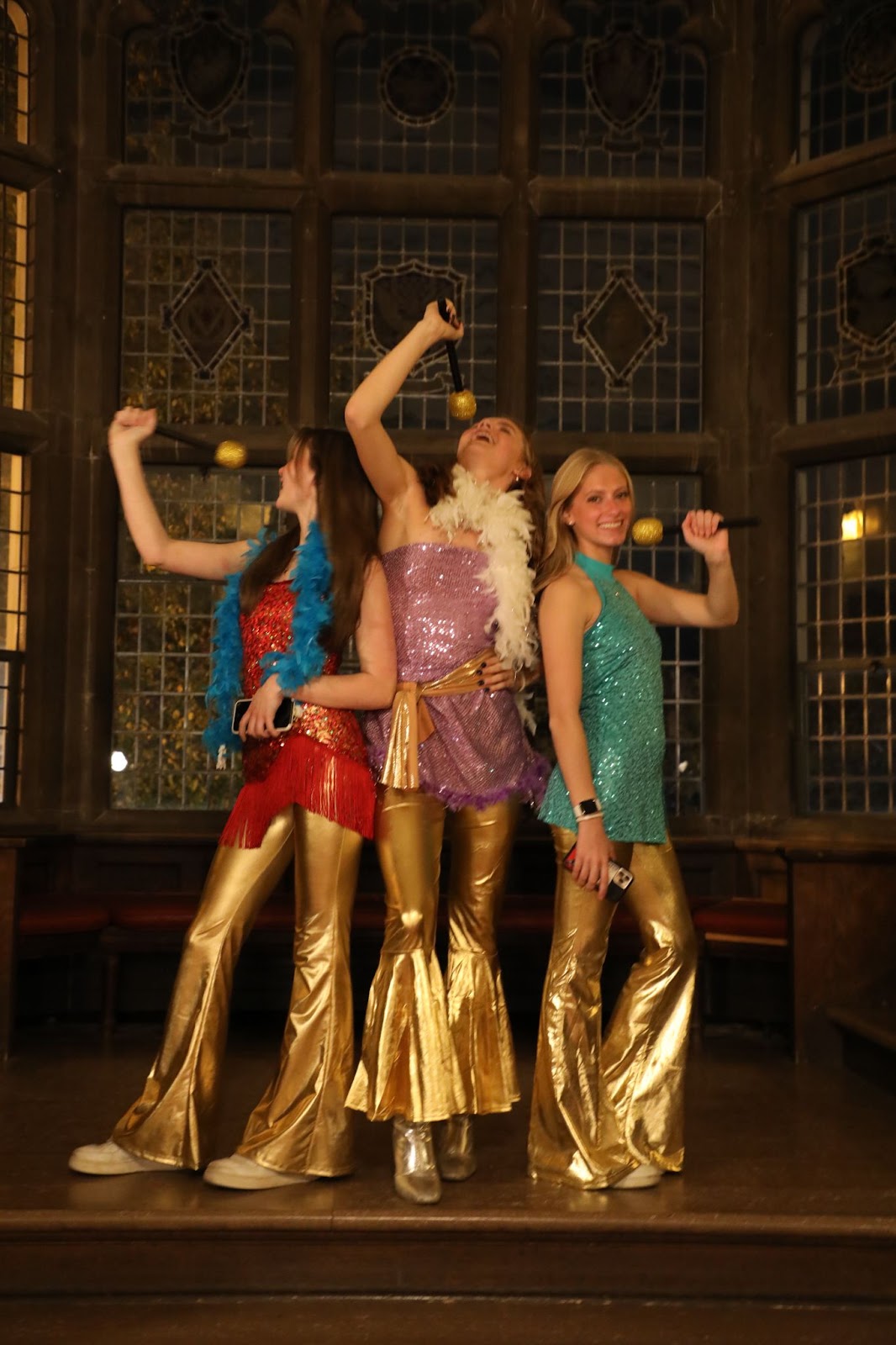 Shining on the staircase in Kellas. 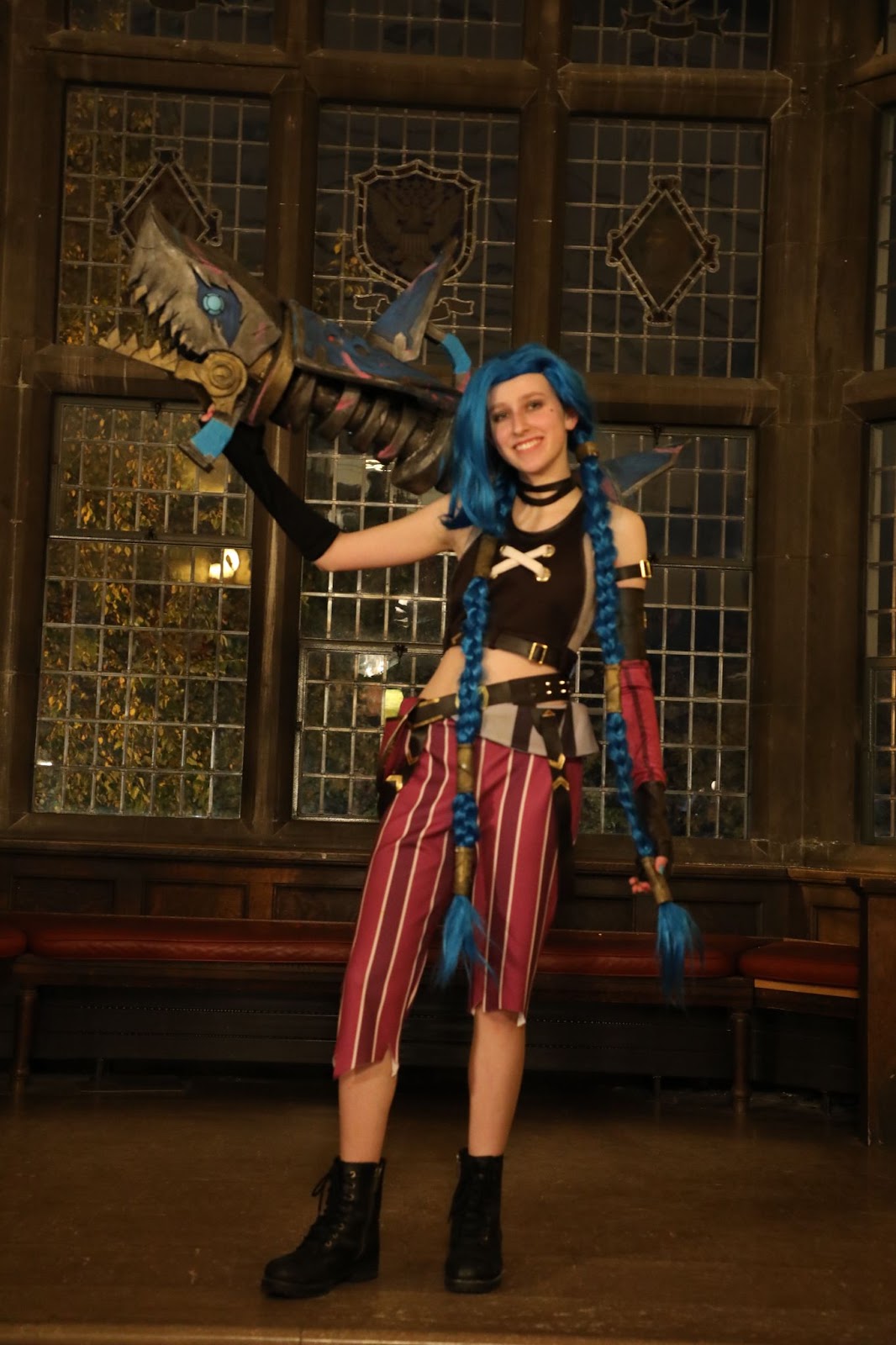 A screen-accurate Jinx from “Arcane” costume!
This Tuesday morning sees us saying goodbye to our beloved Emmaween, feeling a little bit tired as we adjust to a regular day and schedule, but knowing that there will always be next year and for now, fangs for the memories Emma! 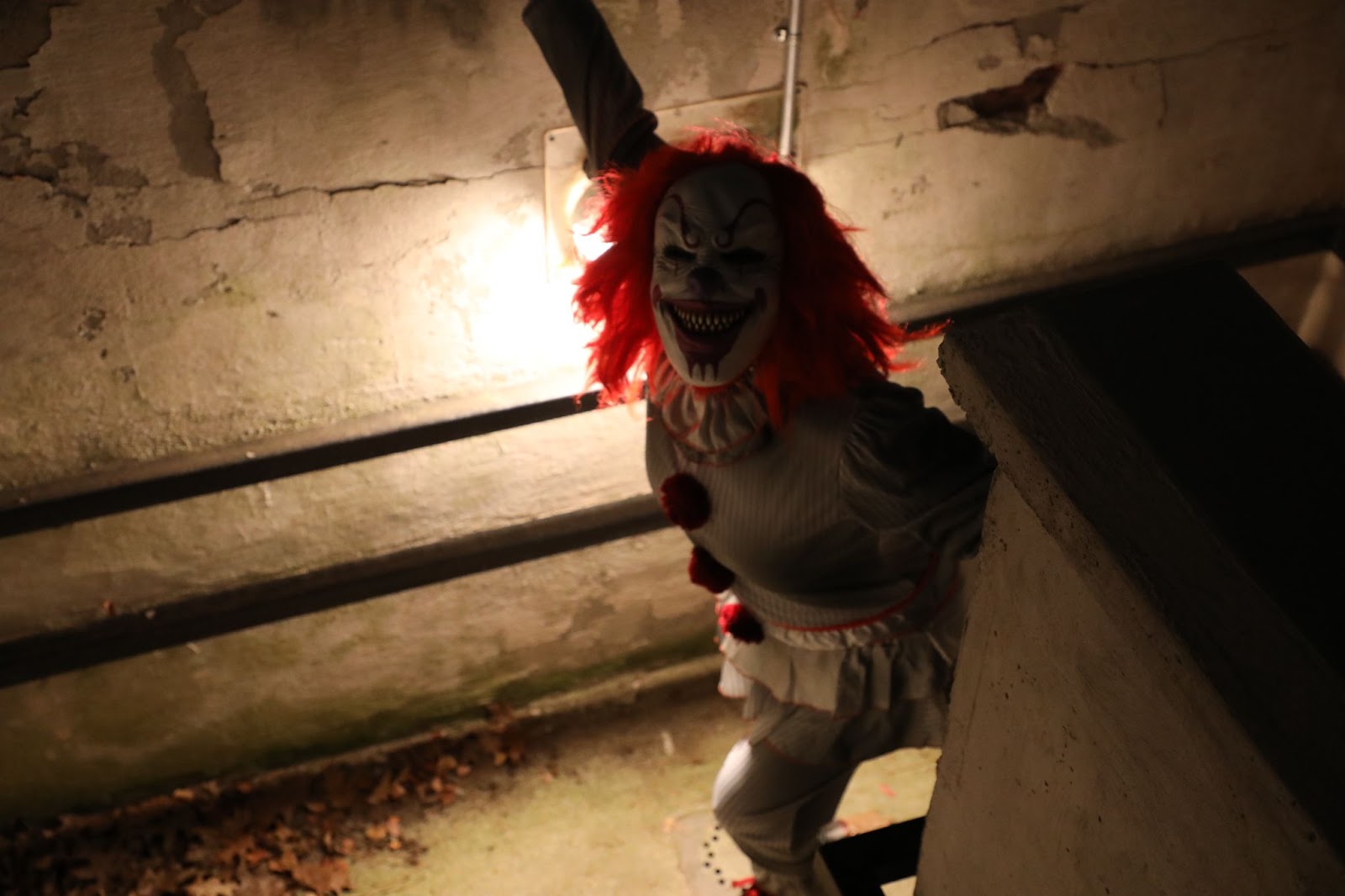 Emma’s resident ghoul terrorizes the stairwell outside this year’s haunted house!
Check out more photos from this year’s celebrations on our SmugMug album, and for a glance at Emmaween through the years, check out the library’s archive exhibit.