Dia K. ’24 and the Vultures of Emma Willard School

11/8/2022
Kaitlin Resler
There are many unique qualities the Emma Willard School campus has to offer: the collegiate gothic style designed by the Olmstead Brothers include the tower, many castellations, parapets, finials, spandrels, and buttresses. Alongside these architectural wonders, eyes gaze down at the inner campus from gargoyles, grotesques and, the only living watchers from the grey walls: vultures.
Most mornings find the vultures on the top of Sage and Slocum halls, their claws gripping the tops of the roof or edge of the tower, wings outstretched towards the sun to burn away the last bits of morning mist. Warming themselves, the vultures look gothic and ominous, but these shy creatures signal the healthy and complex ecosystem on Mount Ida.
Though many in our campus community are fond of them, it was Dia K. ’24 who took the interest a step further for her STEAM10 project last year and embarked on research that would become the VulturesofEmma.org website.
“I really love birds,” she says, tracing the origins of her research to an interest piqued by a friend in third grade who shared a book (one from the Maximum Ride series) about human-avian hybrid people who have wings. The interest in wings and flight naturally led to a fascination for birds, one that surfaces when Dia is out in the natural world.
“I started noticing them in my neighborhood—I was walking a dog for a neighbor in the woods, and I noticed it was full of different types of woodpeckers! I started googling the varieties, and was walking around the woods with this little yorkie, who was so confused, staring up at the trees: I was so excited!”
At Emma, Dia noticed the wide variety of birds on campus. Compared to her previous school, the Emma campus was full of catbirds, robins, cardinals, hawks, doves, bluebirds, and of course vultures. Not just an imposing silhouette atop the buildings, these large birds glide across the wide-sky with wingspans that can reach 178 cm (70.1 inches). “I noticed these huge birds and no one really knew anything about them! I was asking people and they were mostly saying, I don’t know, crows maybe, or hawks? I was like that’s not a crow, and definitely not a hawk!” 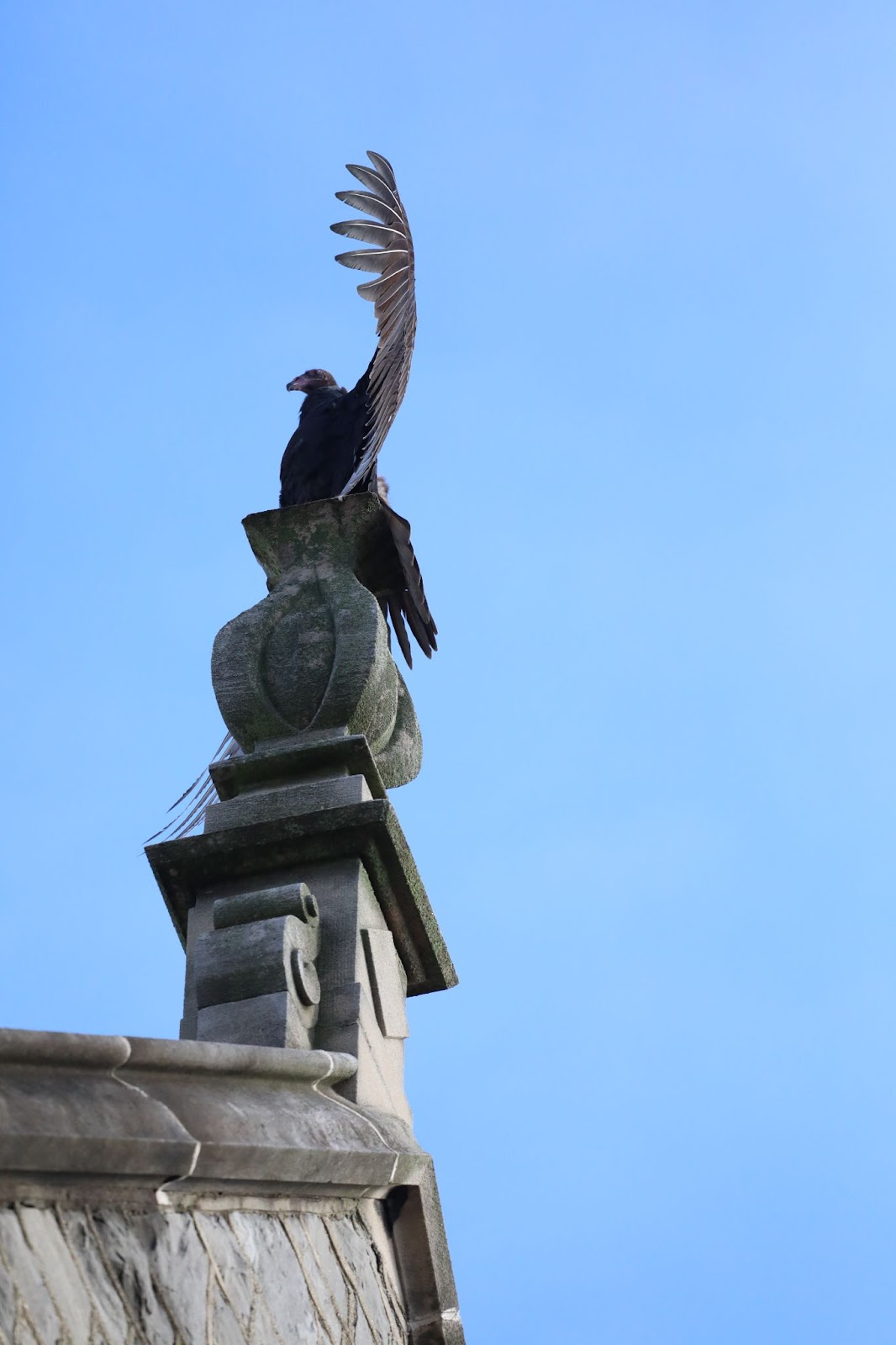 “I was instantly fascinated not just by the idea that they existed, but that nobody knew anything about them or was trying to find out. I was also trying to decide what to do for my STEAM10 project and I thought, what if I figured out what these birds are, what they do, why they’re here?”
Dia started work, and began mentioning her project to people on campus, who in turn told her about the photos they took of the vultures: it seemed that even if people didn’t know what they were, everyone was interested in them. As part of the project, Dia asked the community to send along photos of birds they had taken on campus. The photos weren’t only of the vultures, and illustrated the huge variety of birds at Emma (“One of the people in Campus Safety had a gorgeous picture of an owl in the back 40!”). It became clear that photos were going to be a large part of the website. 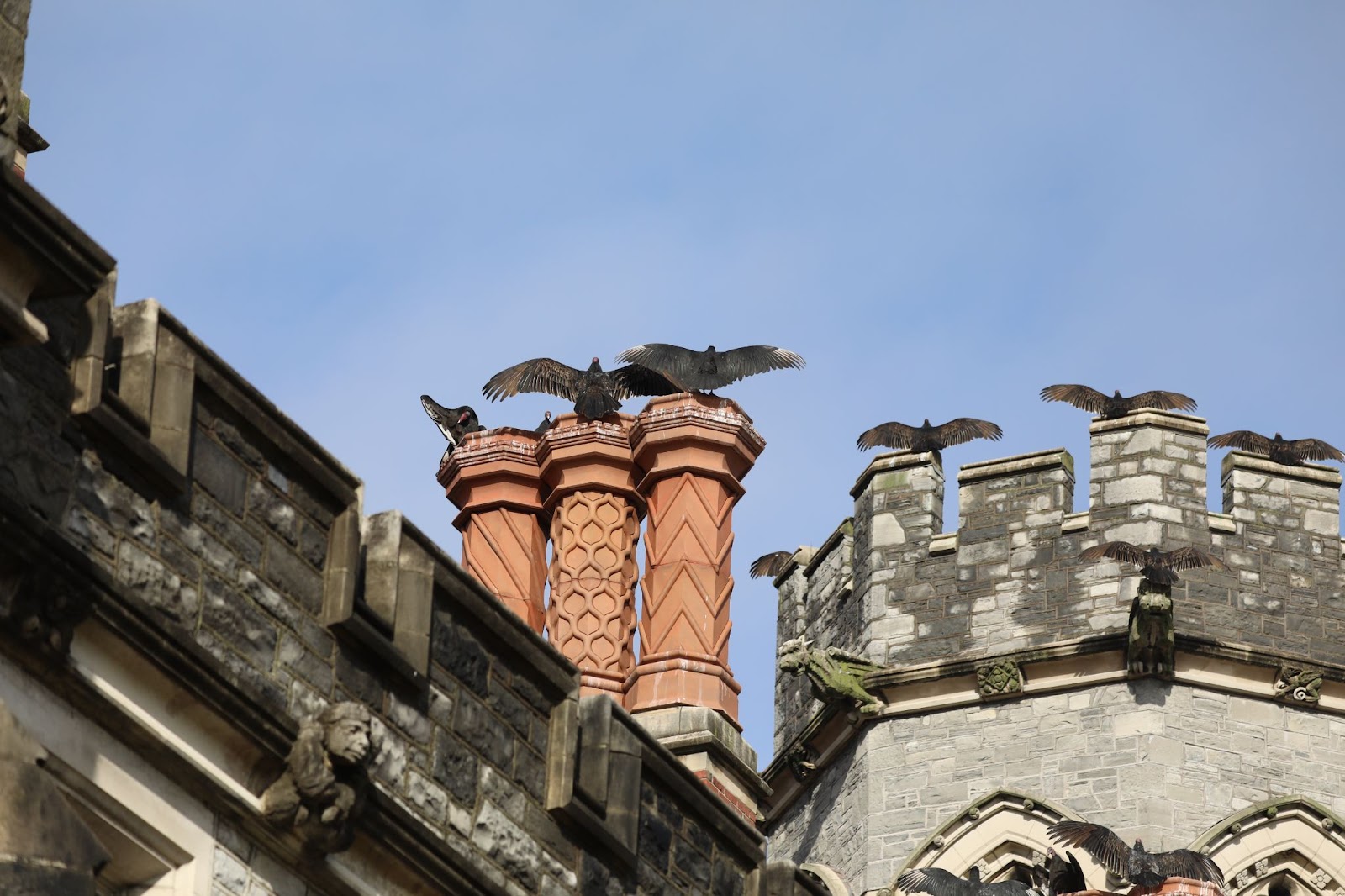 That said, the main focus of the site was information: helping people identify what they were seeing. Emma Willard School hosts two varieties of vultures—the turkey vulture and the black vulture—though many in the community Dia surveyed had no idea how many varieties of vultures even exist. The differences are noted on the identification section of Dia’s website, including information on wing shape, size, color, and habits of posture. Enlisting the help of Robyn W. ’24, to create the layout and design of the website, VulturesofEmma.org launched in Fall 2022.
“I’ve definitely encountered a stigma around vultures,” says Dia. Their reputation in pop culture isn’t great (their repeated appearances in Disney films as hench-birds or circling the sky over a weakened Simba in The Lion King only reinforce the morbid stereotype surrounding them). But vultures are uniquely specialized to help ensure the health of an ecosystem and the creatures living in it, saving on unnecessary environmental and economic costs for carrion disposal and preventing the spread of various infectious diseases.
At Emma, the vultures have become a part of daily life at the school, and it seems like most of our campus feels an odd sense of affection for these strange birds. In a community that bends towards intellectual curiosity it’s no wonder that we’re interested in, rather than repelled by, the vultures.
“It’s a really cool part of the school,” adds Dia. “It’s not connected to us at all, not the students, just to the school buildings: it’s the perfect place for them!”
As for the buildings themselves, the vultures aren’t apparently causing any particular damage or harm to them. Dia plans on updating the website now and then with new photos since people are still taking them and sending them to her. This year she’s working on a Signature Project, in collaboration with the Rensselaer Bird Center, spending six hours every weekend training two wild parakeets. Through the weekly sessions, Dia hopes to train the birds to be as amenable to her as a hand-tamed parakeet.
“So far, over the past few weeks, the male will step on to me and he’s pretty chill! The female still bites like crazy though.”
Looking to the future, Dia expresses a possible interest in avian veterinary studies. With only two specifically avian veterinarians in New York State, it’s a profession that needs interest, and her time at the bird center only emphasizes this need. “Birds are very fragile, and when they get sick it turns so quickly. A lot of people have birds, and they get sick just like cats and dogs!”
No matter what, the vultures of Emma have and will benefit from Dia’s work, reminding us that “Overall, Emma Willard is perfect for vultures in every single aspect!”