11/15/2022
By Melissia Mason
The Emma Willard School Theatre Department opened this year’s season with an adaptation of the Greek tragedy Antigone by Sophocles. The adaptation, set in post-World War II Greece, follows Antigone as she struggles with the decision of whether to follow her heart—be “herself”—or bow to pressure from those in power.
Reporters (Nora B. ’25, Zahari F. ’26, Ash L-S. ’25) open the play in a press conference with press secretary Cosmo (Kelsey D. ’25), who announces the death of brothers Polynices and Eteocles. While Eteocles is buried with honor, Polynices is shunned and left in the street, as ordered by their uncle Creon (Azure-Rain C. ’26). 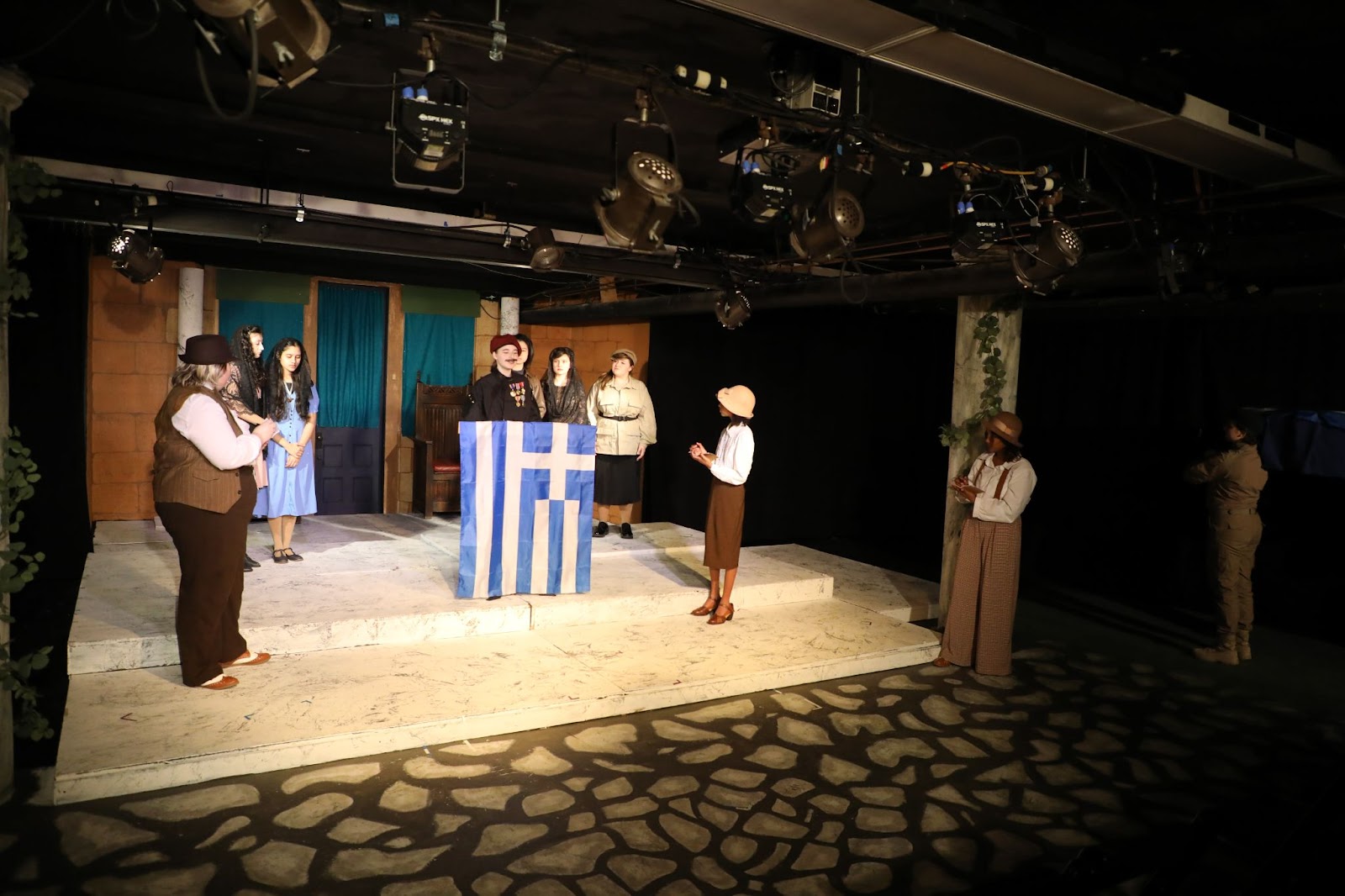 Antigone (Harini D. ’25) struggles with her uncle’s order, while her sister Ismene (Maya L-C. ’25) begs her to let it go, saying “It’s normal for men to believe in ideals and to die for them, but you’re a girl.” 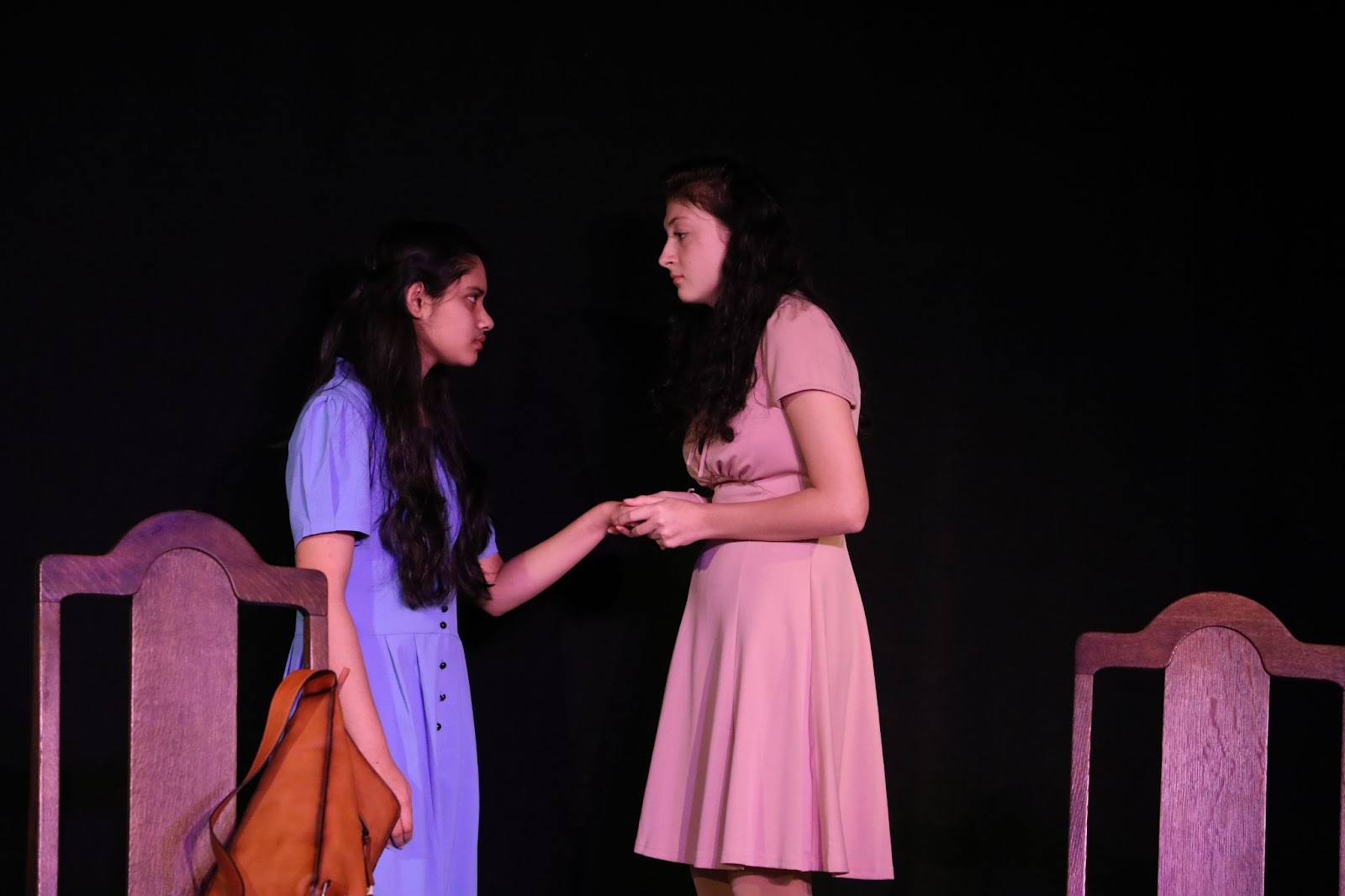 Undeterred, and perhaps even emboldened by the unfairness of the patriarchy that attempts to control her, Antigone resolves, “My conscience won’t let me stand by and do nothing.”
She defies the authorities and attempts to bury her brother, but is caught and arrested by Creon’s guards (Maci C. ’25, Nghi H. ’25, George T. ’26). 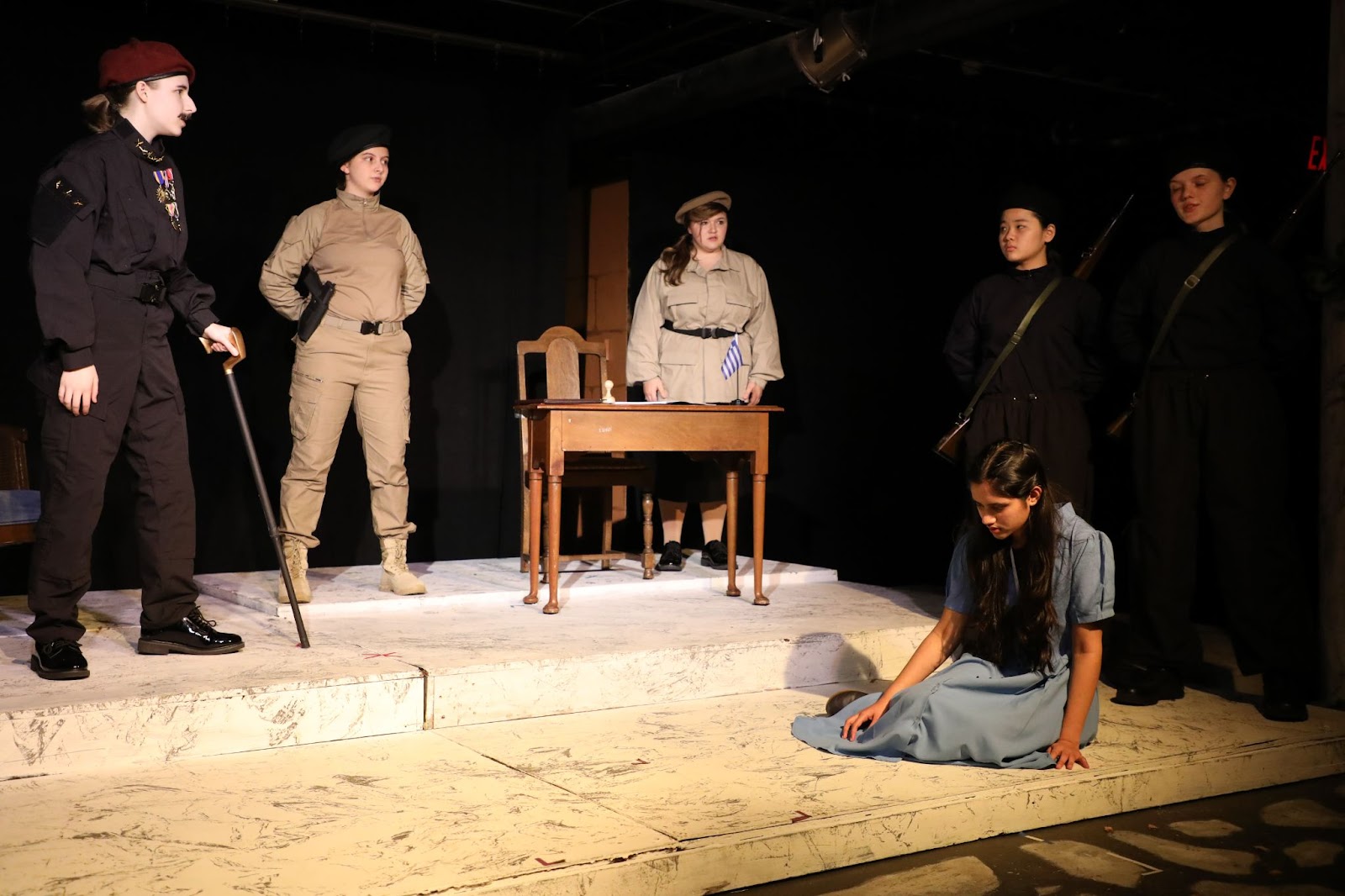 Faced with the thought of Antigone’s punishment, Creon’s wife Eurydice (Comet D. ’26), tries to talk sense to her husband, encouraging him to show mercy. 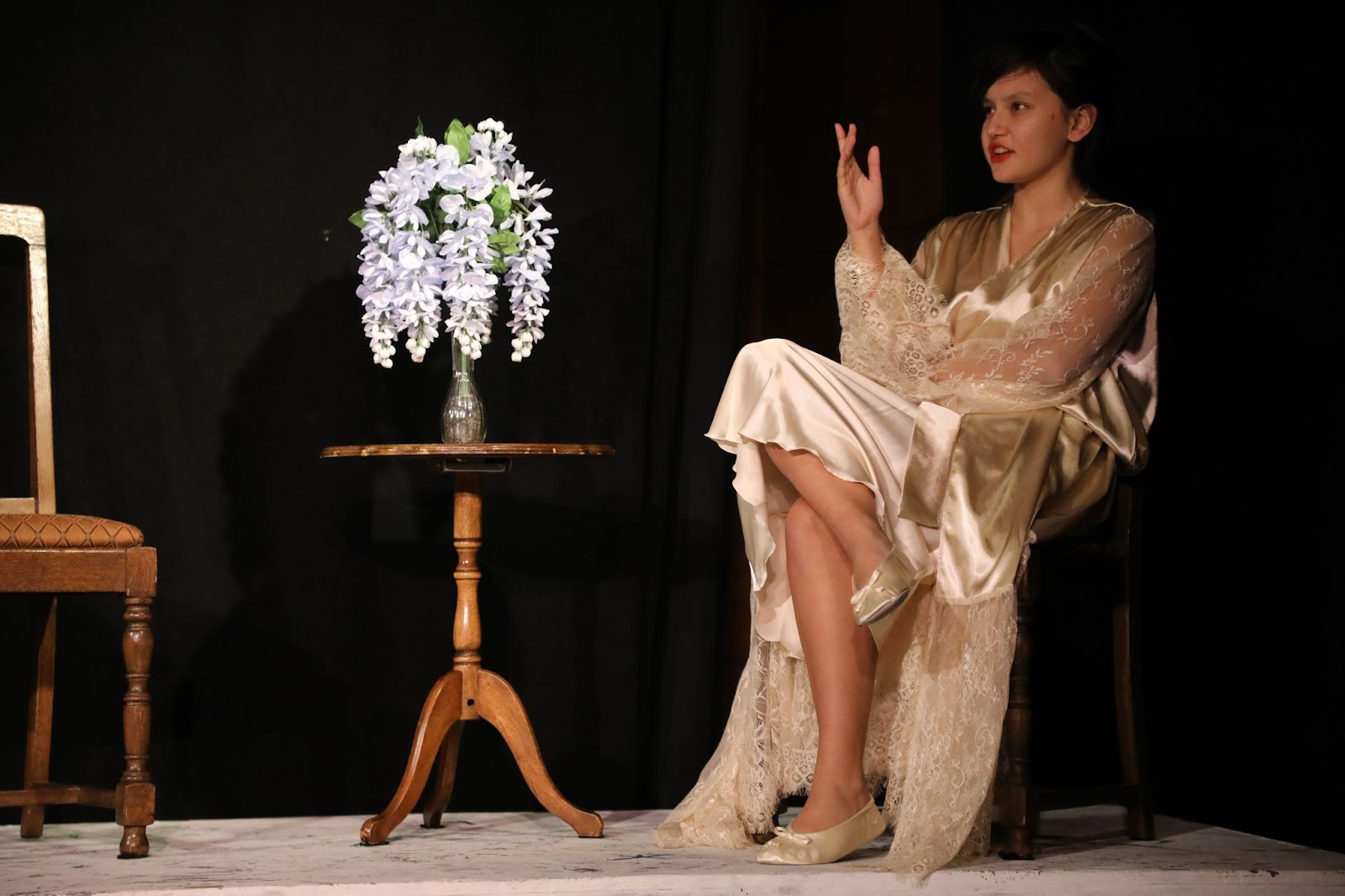 After being judged and found guilty, Antigone faces death. Those gathered to hear the news are quickly distracted by other announcements of the day, but Antigone’s fiancé, Creon’s son Haemon (Ava W. ’24), urges them to use their power—the power of the people—to free Antigone. In the face of their indifference, Haemon sets out to free her himself. 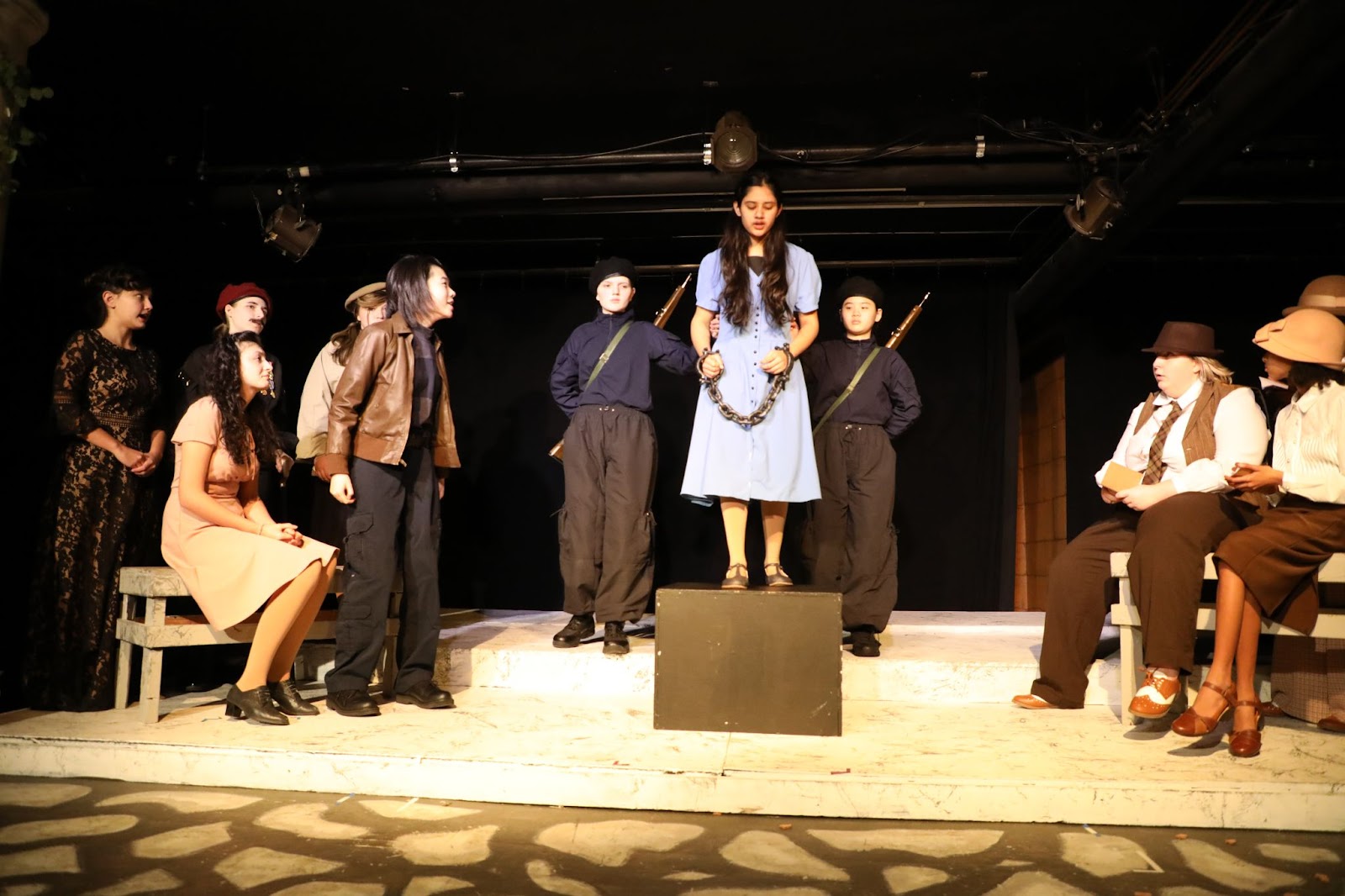 Although Creon has a change of heart and sets out to release Antigone, his action is too late. In the end, Haemon and Antigone meet a tragic fate, both losing their lives in their commitment to do the right thing. 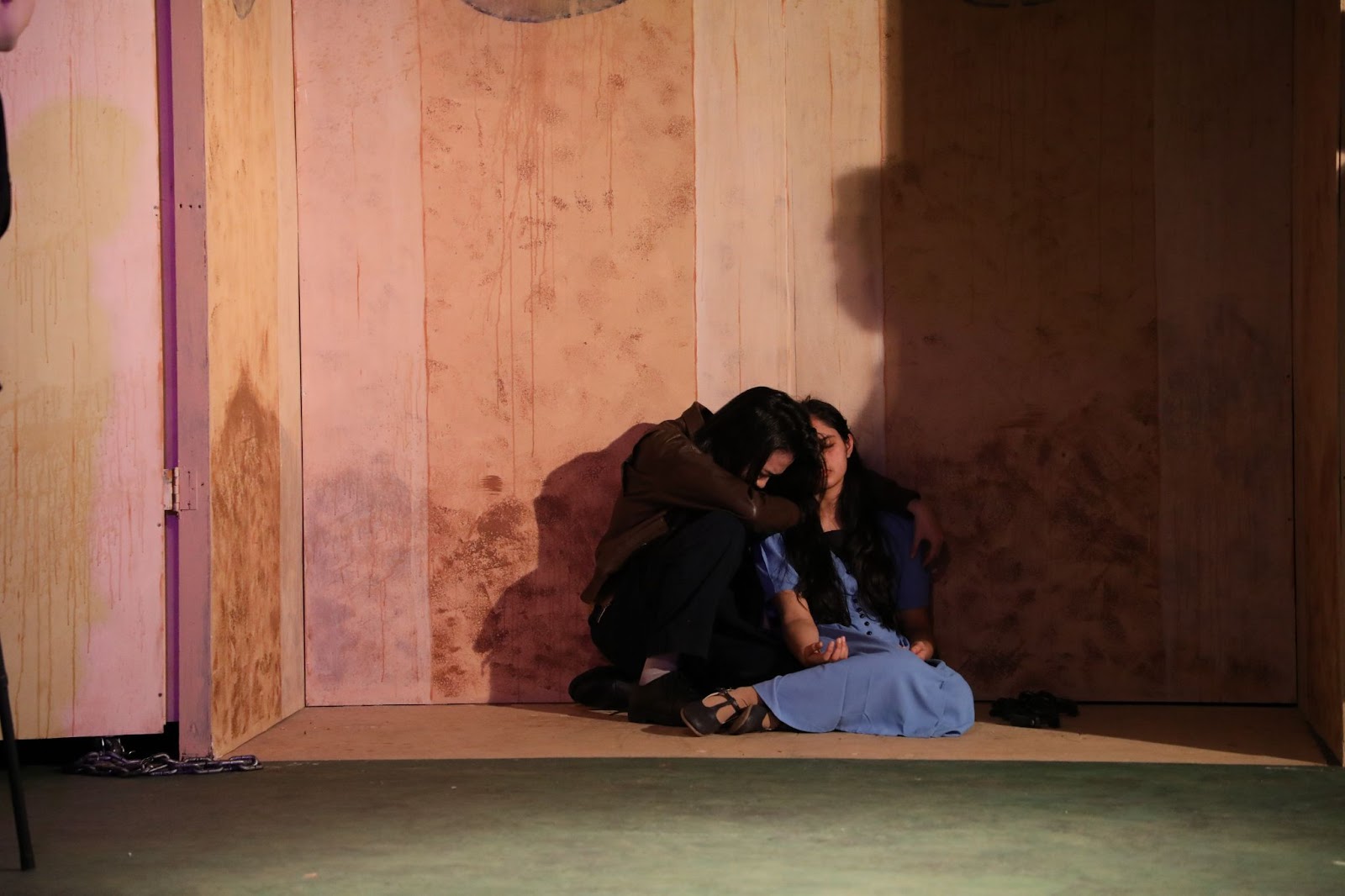 In her distress, Haemon’s mother Eurydice ends her own life and Creon is left alone. The story ends with members of the press giving commentary on the tragic state of affairs, observing that “a great sad calm descends on Thebes and Creon can now begin to wait for his own death.” 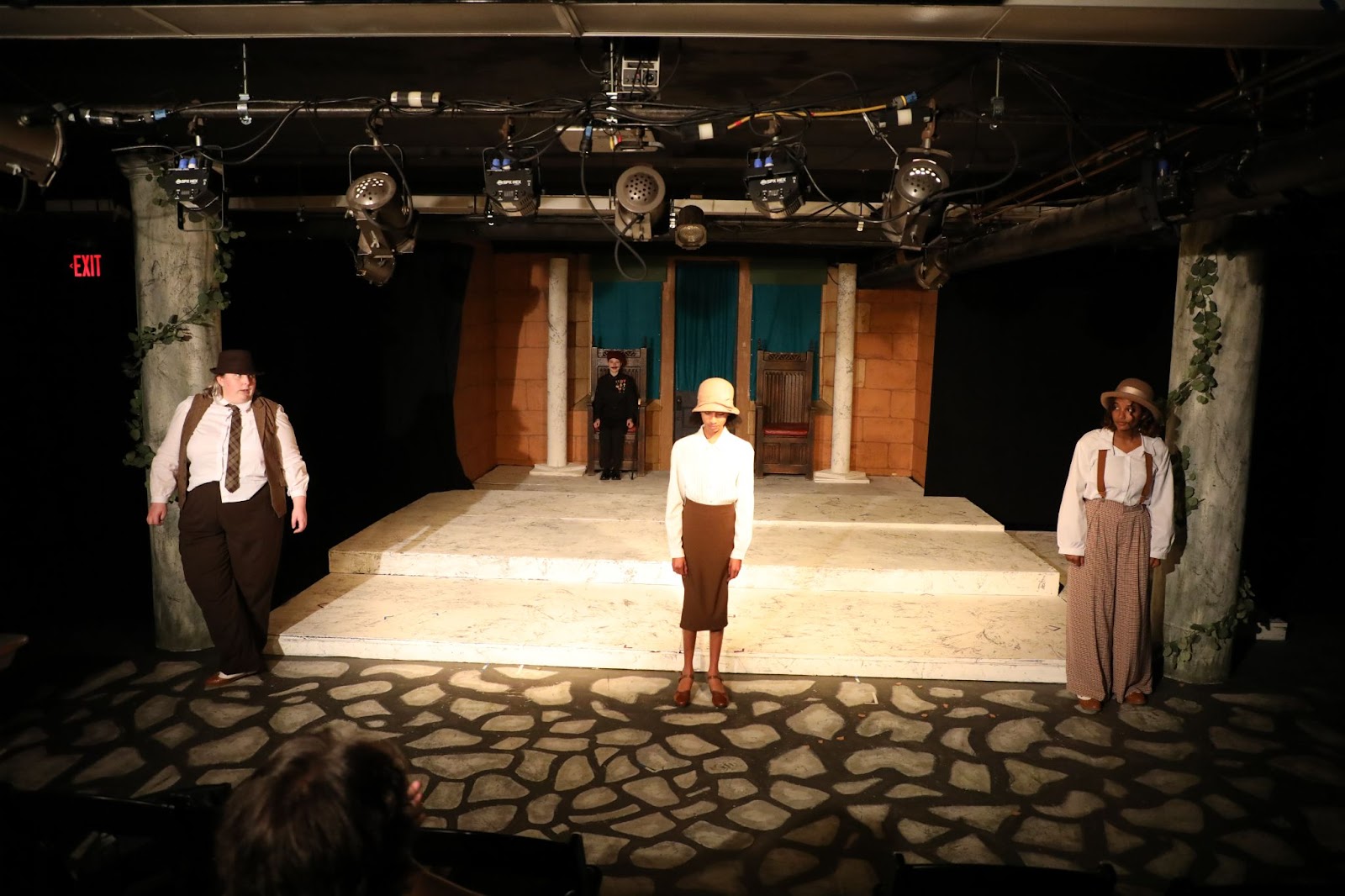 Crew members, under the guidance of Technical Theatre Director Rachael Robison, supported the cast of actors in the production of Anti-Gone by building sets, designing costumes, working backstage, designing the playbill, managing props, running light and sound, and much more! The crew consisted of Abena A. ’25, Mikayla B. ’25, Kendall B. ’26, Nica C. ’24, Waverly C. ’24, Callie H. ’26, Hedy H. ’24, Maya J. ’25, Yaryna K. ’24, Renata L. ’26, Ksenia M. ’26, Phoebe O. ’24, Yuri O. ’25, and Chloe Y. ’25.
Theatre Director Faith Lawson wrote the script for this adaptation using three different scripts for reference. “The story of Antigone is one of those that’s always relevant,” she shares. “Standing up for what you believe in, facing authority and opposition but holding your ground and the consequences that come—I thought that would be something our students would relate to.” She notes that current events lead us to reflect on what the law allows, and students can reflect on what it means when people choose not to adhere to unjust laws.
“I very much wanted to lean into the Greek tragedy of it,” she continues. “There isn’t a happy ending, there isn’t a way to fix it. The solution—Antigone’s purpose—was to affect others and spark the desire to create change and not take things at face value. That is her true duty. I was glad that I was able to do that with this story.”
With mental health at the top of mind, portraying the suicides in the story required attention early on. Mx. Lawson consulted with mental health professionals on staff at Emma and led conversations with the cast from the very beginning about how the audience would react to certain lines delivered in a particular way. The students even added a scene of their own—Ismene mourning at Antigone’s crypt—to give homage to that character’s journey and the impact of being left behind in her grief. The students felt it was necessary for the guard, who was oblivious of the impact of his actions, to see that grief.
In response to these particular themes in the story, the Health Center made resources available to the audience to address suicide awareness. “A lot of thought went into how it was presented on stage to take away the sting of the subject matter,” Mx. Lawson shares, noting that the students themselves had asked to be a part of something with emotional grit. “I’ve been so pleasantly surprised by how talented our young actors are and what they’ve been able to accomplish. I couldn’t have asked for more in terms of their ability to tell the story.”
The cast and crew of Anti-Gone did an amazing job in preparing their parts, both on and off the stage. Mx. Lawson saw a realization in the actors that they can actually embrace another persona. “It was about realizing they can actually act, be someone other than themselves, and have empathy for that character and tell their story with sincerity,” she shares. “They always felt for the characters and their plights. They’re flexing their empathy muscles.” With the addition of Mx. Robison as technical director, the crew had their own opportunities to work together, build things together, and rehearse in a way that allowed them to see that part of putting on a play is all the people who are not on stage. “It is a great accomplishment for all the students involved,” Mx. Lawson concludes.
Bravo to the full cast and crew of Anti-Gone… we can’t wait to see your next production!
—
To see more photos from the production, visit our SmugMug.

If you or someone you know is thinking of ending their life by suicide, please reach out to the Health Center Staff and/or call a suicide help line for support.