The Power of Mud: Harnessing Electricity Generated by Microbes
Website | Video Presentation
In a world caught in a cycle of creating man made solutions to man made problems, truly earth-healthy and sustainable sources of electricity are hard to come by. And with the looming figure of climate change, it is essential that we find environmentally friendly alternatives to our conventional sources of electricity. So what if I told you that a sustainable and renewable form of electricity is right at our fingertips? An underestimated character of the natural world, mud (more specifically the microbes that live in it), can generate electrical energy. This energy can be harnessed by a Microbial Fuel Cell, which is essentially a makeshift battery. Over the past three years, I have spent countless hours either knee deep in ponds digging for mud or huddled in the lab tinkering with circuits while waiting for my microbes to create a biofilm over homemade electrodes. My presentation will follow my process of building and refining my interpretation of a Microbial Fuel Cell and attempting to utilize it to power an LED light. It will also cover the biological processes of these energy-efficient microbes, and how they might fit in to the electricity landscape of our future. 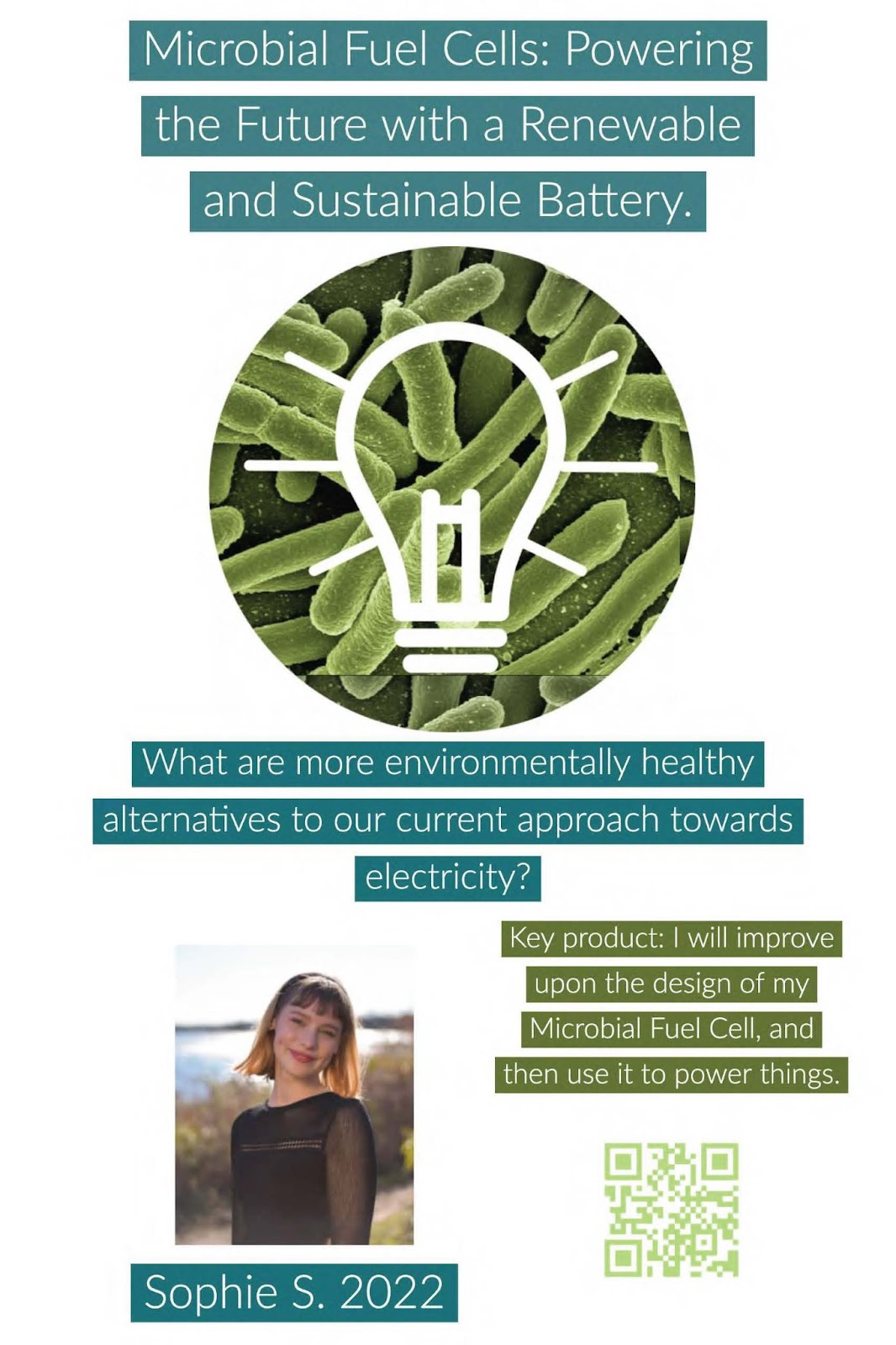 Efficiency Of Rowing Motion And Posture
Website | Video Presentation
The layback angle has differed the most in rowing (aka crew) techniques between coaches. Some believe that some angles are a waste of energy, while others think that they are critical to success. My project aims to find the best angle of rowing layback by analyzing motions and data using an ergometer on a “slide,” which simulates a boat in the water. Since the possible change of speed is caused by the shift of center of mass, thus putting a rower on an ergometer that’s on the slide and determining the pulling force of the slide is my approach to figuring out the best body angle. The ergometer cannot recreate the actual experience on the water, thus the measurement from the model can only go as far with the given circumstances. 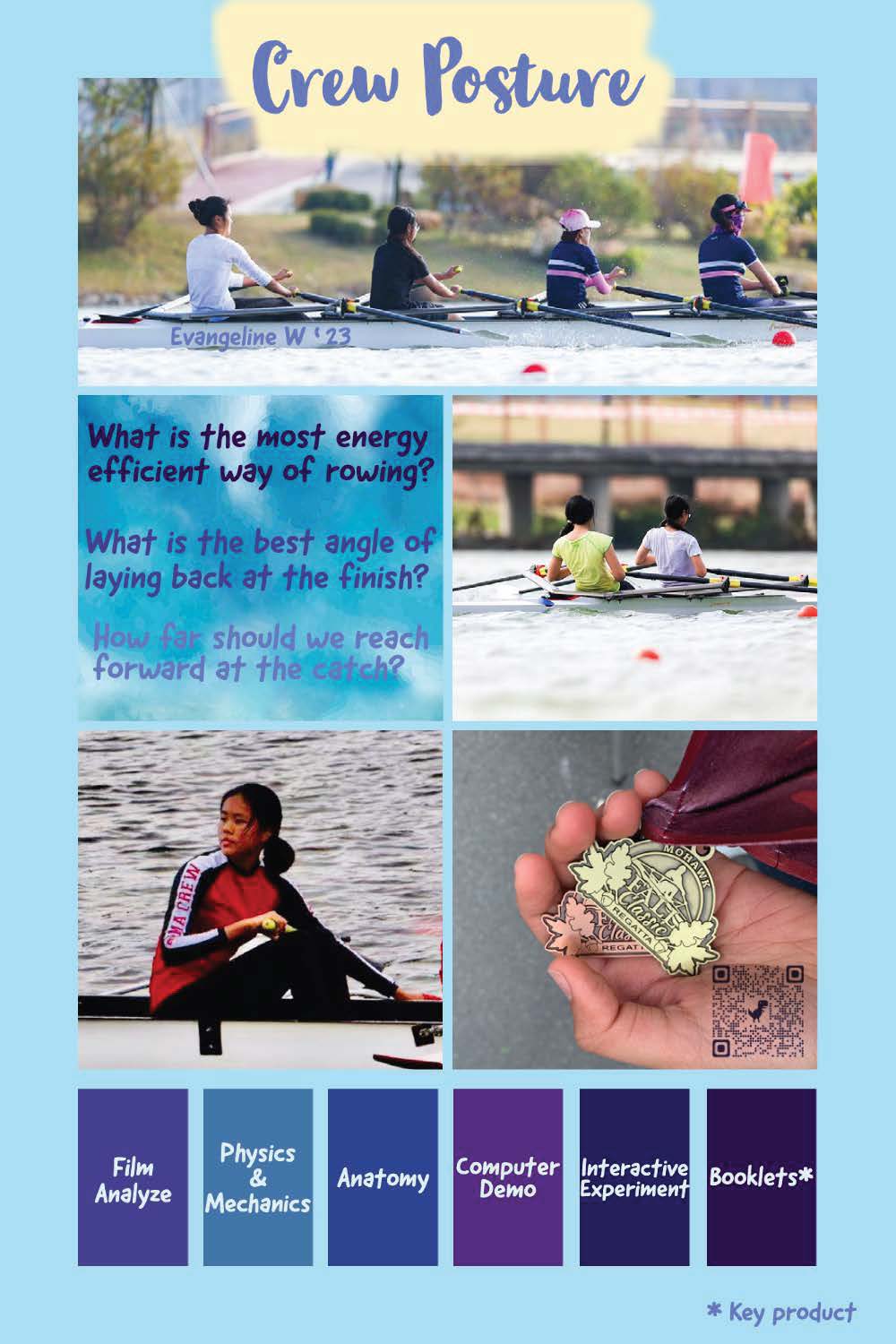 The Scientific Research Process in Neuroscience and Experimental Therapeutics
Website | Video Presentation
My Signature project focuses on the time that I spent working under Julie Pilitsis MD, PhD, MBA in Albany Medical College’s Department of Neuroscience and Experimental Therapeutics (DNET). I started in DNET in June 2021, in the summer of my sophomore year, in the NextGen Neuroscience program. At the time, I was simply interested in being exposed to research. Since then, I have continued my work in DNET throughout the school year. During my time in DNET, I have developed in professional, academic, and scientific ways: the three focuses of the DNET NextGen Neuroscience program. I have developed professionally as I was exposed to careers in research that I might not have considered before. I have developed academically as I performed literature reviews and assisted in writing research manuscripts. I have developed scientifically as I was exposed to new concepts such as neuromodulation and chronic pain. I was even lucky enough to be published as a co-author on a paper in Frontiers in Pain Research. I have always been interested in working in the medical field and science in general, and my experiences in DNET have only furthered my curiosity and intellect. Since June 2021 when I started my work under Dr. Pilitsis, she has left DNET to become the Dean and Vice President for Medical Affairs at Florida Atlantic University’s Charles E. Schmidt College of Medicine. However, I look forward to continuing remote work with her on clinical research. 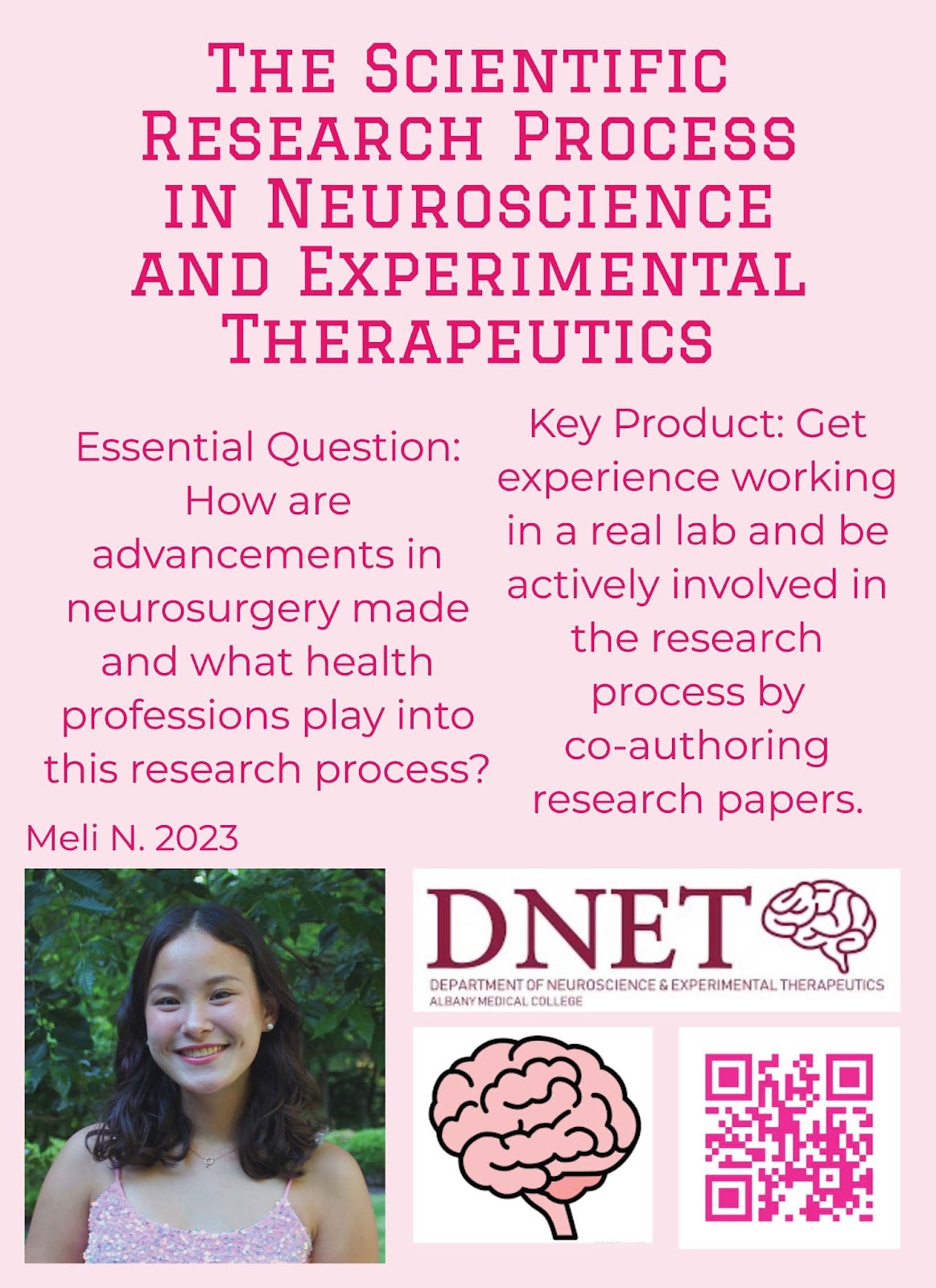 Studying The Night Sky With A Camera
Website | Video Presentation
I like to take photos of the starry sky from Emma Willard, but I usually struggle to find stars using a paperback encyclopedia of stars in the dark. Then, I thought making a digital planisphere—which determines the directions of stars by entering a date and position (geographic coordinates)—can be helpful for my photo shoots. I started this project by learning the basics of astronomy to get knowledge and understanding of how stars and planets move constantly and how they look from the Earth. With this solid knowledge and understanding, I’ve started making a digital planisphere in the programming language Processing by using the Yale Bright Star Catalog as a source of names, positions, and magnitudes of more than 8,000 stars. Simultaneously, I observed the stars weekly from Emma Willard using a digital camera with a GPS unit and a computerized telescope. I digitally corrected photos to use as information for my digital planisphere and to improve my photo skills. Through this progress, the most interesting takeaway so far is that retrograde can be observed from Earth, since the orbital periods of planets are all different. 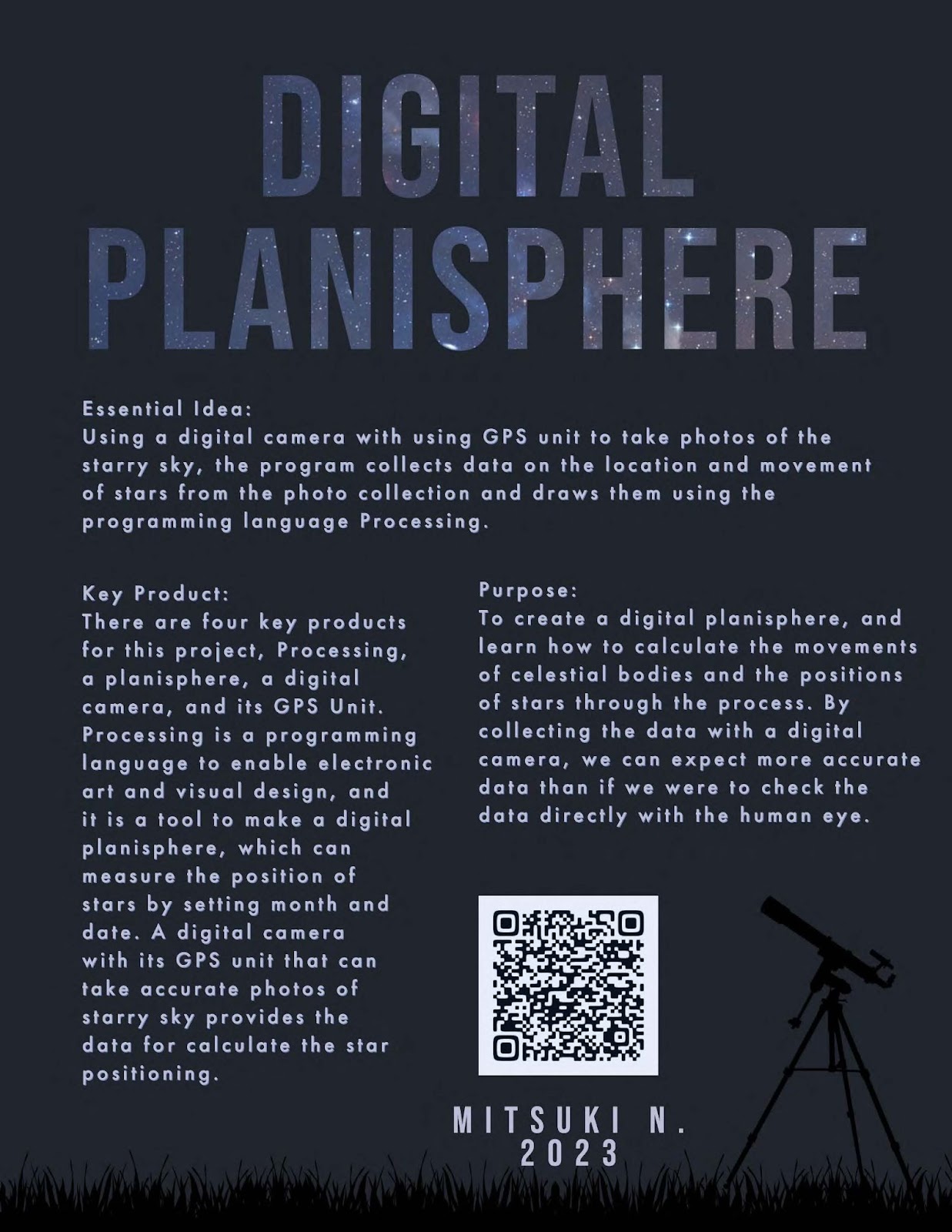 Milkweed Research
Website | Video Presentation
For my Signature project, I grew milkweed hydroponically and am currently analyzing the concentration of cardenolides in the leaves. Last summer, I received the opportunity to intern at an environmental education center where I habilitated monarch butterflies through their lifecycle. I became fascinated by the process and desired to carry my research through my senior year. I reframed the research to focus on milkweed, specifically the cardenolides found in the leaves which give monarchs their toxic defense mechanism. I managed to grow milkweed hydroponically, and, afterwards, I followed the procedure from a master’s thesis titled Extraction and Quantification of Cardiac Glycosides from Asclepias Viridis Leaves. As of right now, all my leaves are harvested and frozen until they are ready for use. In the coming weeks, I will dry all the leaves out for 24 hours, and create a calibration curve using digitoxin. The following steps are where it gets complicated, for in order to actually extract the cardenolides from the plant, a specific chemical is required (TNDP), which I cannot use on campus because of its chemical composition. Hopefully, in the next few weeks, I will partner with a college or research facility to create the chemical reactions I need. 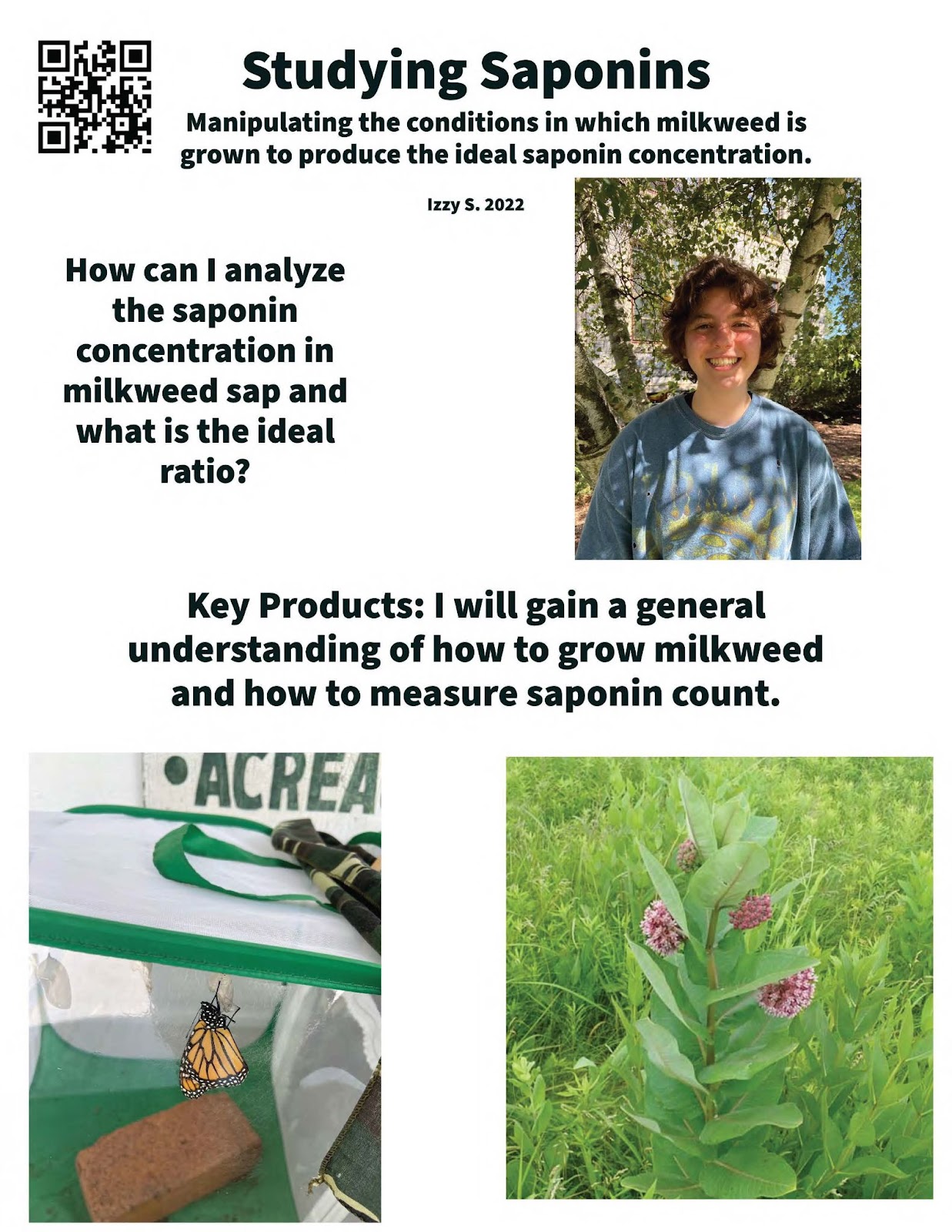 Studying The Brains Of Criminals
Website | Video Presentation
My project began with an interest I had in the brain of those who commit extreme crimes, and how damage to their brains can cause irrational decision making. After expanding my knowledge on this topic, I realized that there was a common theme when evaluating the brains of criminals: traumatic brain injuries. These extreme impacts to the head caused damage to fundamental parts of their brain which influenced such criminal behavior. Following this observation, I continued to notice a correlation between traumatic brain injuries and crime and imprisonment. From this, I was inspired to observe the “front end” and the “back end” of this problem: how can brain injuries be reduced so less crime is committed, and how can those who have already suffered a traumatic brain injury be provided with better resources and treatment to prevent such actions. While concussion and other brain injury prevention has become increasingly prevalent, there is an inadequate amount of attention paid to those who have already experienced a brain injury, or those released from incarceration following a crime due to their brain injury. After compiling my research, my work will be displayed in a brochure in the READY Center to aid Emma Willard students in obtaining better information about the dangers of a traumatic brain injury and offering more resources for this injury. As the brains of young people are more susceptible to these injuries, it is essential to provide more information and resources in efforts to reduce them, and therefore crimes committed. 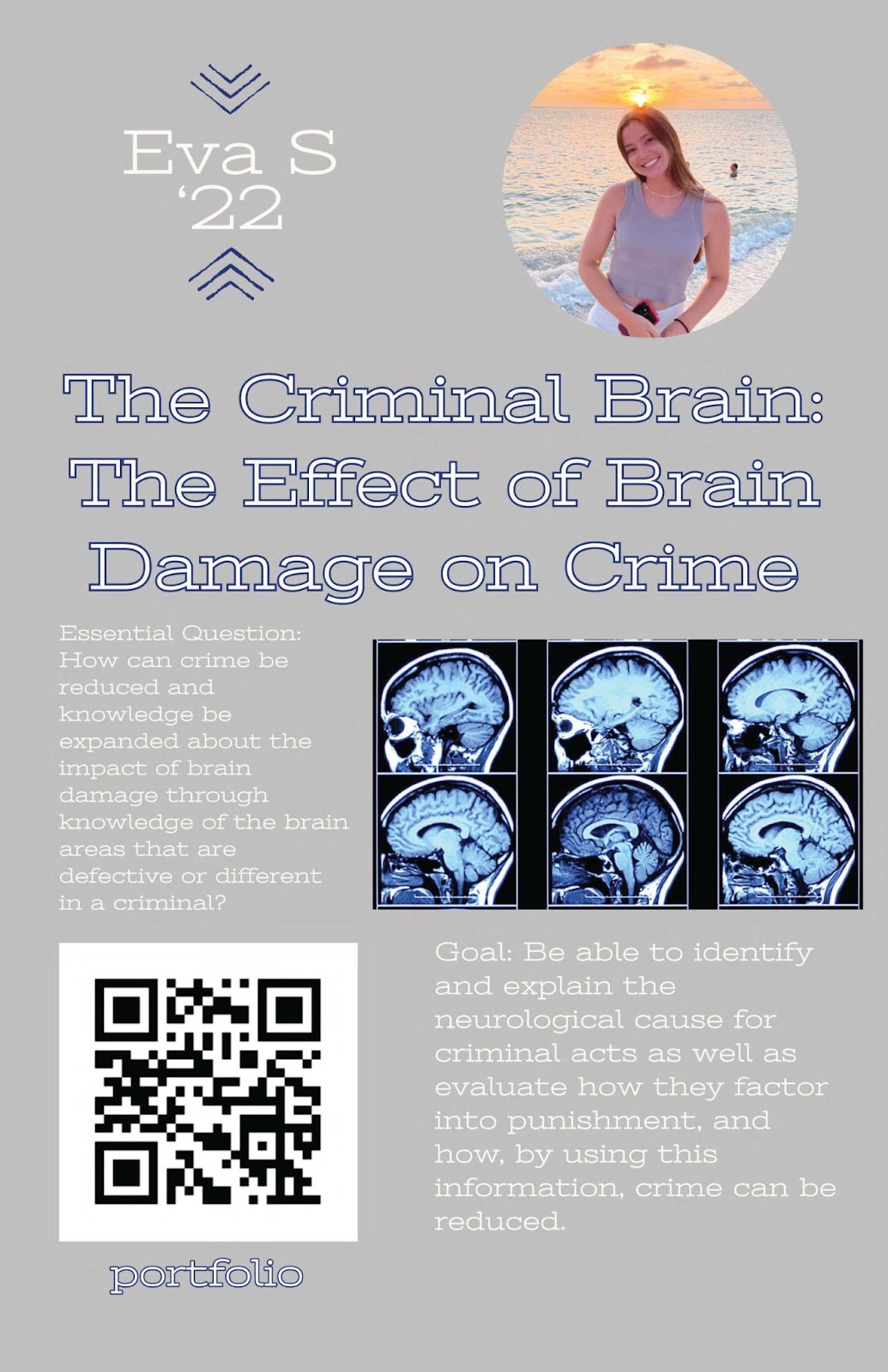