In Translation: Roman Conceptions of Queerness & Gender Non-Conformity
Website | Video Presentation
Translating original texts from Latin into English in order to analyze them for instances of queer love and gender non-conformity.
I finished taking all of Emma Willard’s Latin classes when I was a Junior, but the fact that I had run out of classes to take wasn’t going to stop me from continuing my Classics journey. Thus, I embarked upon this Signature project. I set out to work on translating a series of Roman texts containing queer characters and relationships, and I succeeded in that goal This year, I translated 3,300 words of Latin text into Englishe from two texts: Metamorphoses by Ovid, and The Aeneid by Vergil. From the Metamorphoses, I worked on the story of Iphis and Ianthe. Iphis is a girl who has been raised as a boy, and her female identity is hidden from society; Ianthe is also a girl. They fall in love, and to make their union ‘allowable,’ the gods transform Iphis into a man.
I then translated a passage from The Aeneid about Nisus and Euryalus, two male lovers from Aeneas’ army who sneak into the enemy camp and complete many heroic slaughters before they are caught and executed. While I was translating, I also did very valuable work on bettering my Latin basics; I refined my understanding of noun endings,  how to most effectively use Latin dictionaries, and more. All of this served to help me become a better Latin student, which was the true goal of my Signature project. Exploration Of Biomedical Topics In French
Website | Video Presentation
I decided to create a Language Signature project this year, as I had run out of French language courses to take. For this project, I decided to integrate my interest in science to explore genetic modification and its ethics using French resources. These resources included video lectures and scientific articles, which allowed me to learn more about the topic while also familiarizing myself with the French vocabulary associated with it. My end product for this project is a lesson plan designated toward a French IV-level class, including a brief introduction and information on the topic, discussion questions on the ethics and moral implications of modifying the human genome, and a review worksheet on the information taught. 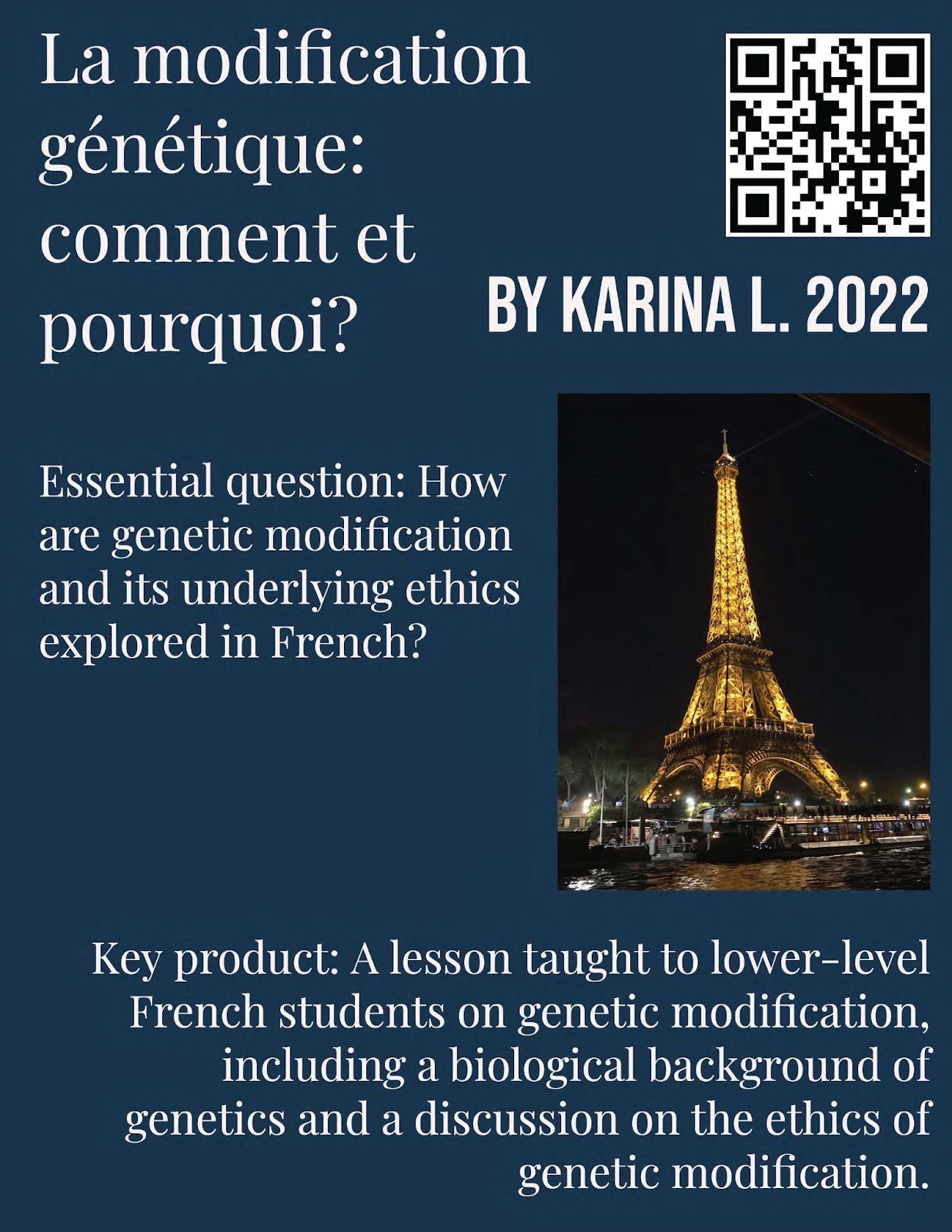