Siena College and “Quantum Party!”—The board game about quantum physics
Website | Video Presentation
During the 2021-2022 academic year, I joined a team of faculty and students at Siena College that developed a board game, “Quantum Party!” This game introduces players to concepts and experiments related to quantum mechanics. My job was to further their understanding of how (or even if) the game could supplement the classroom experience. I introduced the game to my peers and organized sessions to play the game and collect their feedback. After that, Dr. Bellis taught me more about the science behind the game, giving me a new perspective on the game, which allowed me to create a progress assessment for students to take before and after playing the game. I then researched New York and Illinois State education guidelines to find specific learning goals that could be emphasized by playing Quantum Party!. My contributions to the game have provided specific feedback that will inform the development of this game as the Siena team seeks to distribute the game to other teachers. 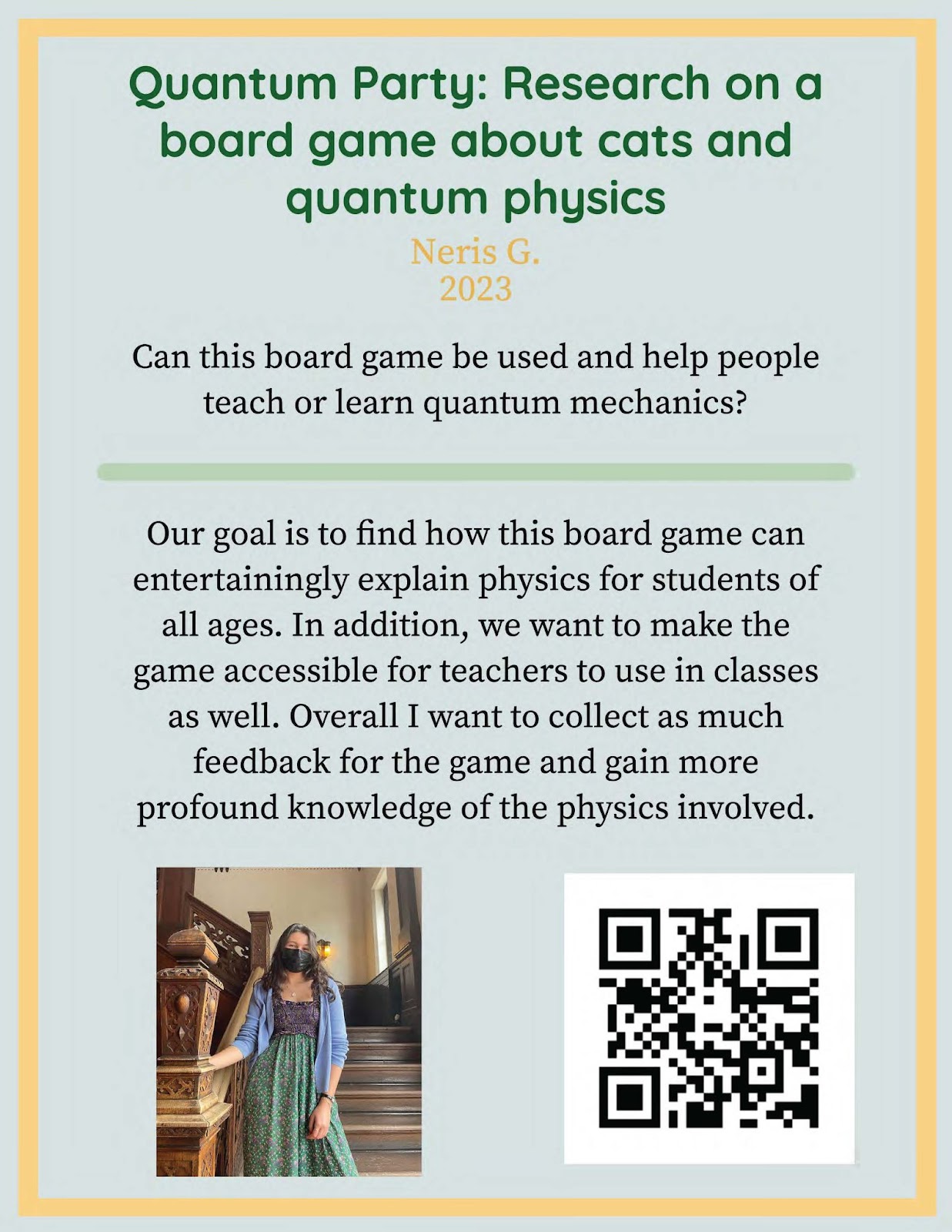 Sanctuary For Independent Media: Podcasts About Medical Ethics And Different Viewpoints
Website  | Video Presentation
As part of the STEAM Signature program, I had the opportunity to intern at The Sanctuary for Independent Media and produce at the Hudson Mohawk Magazine. In order to delve deeper into one of my core interests, I wanted to make my segment’s “bucket,” which is another word for the core topic, “medicine.” However, my advisor wanted me to make my station unique which would intrigue the listeners, and I thought, “What if I tackle a typically ignored perspective?” I was able to set my bucket as “Medical Ethics;” it would still be related to medicine but from a social science point of view. I believed that while a lot of people are aware of the development of the science behind medicine, the word medicine is gilded that the inside is neither being developed nor repaired. My segments involved interviews with professionals such as a laboratory researcher or a professor at local institutes. In the learning process, I improved on forming the questions and leading the conversation within the time frame. Currently(April 29th), I have published 5 segments for my station, and each brings up a different point of view in terms of medical ethics from various perspectives. 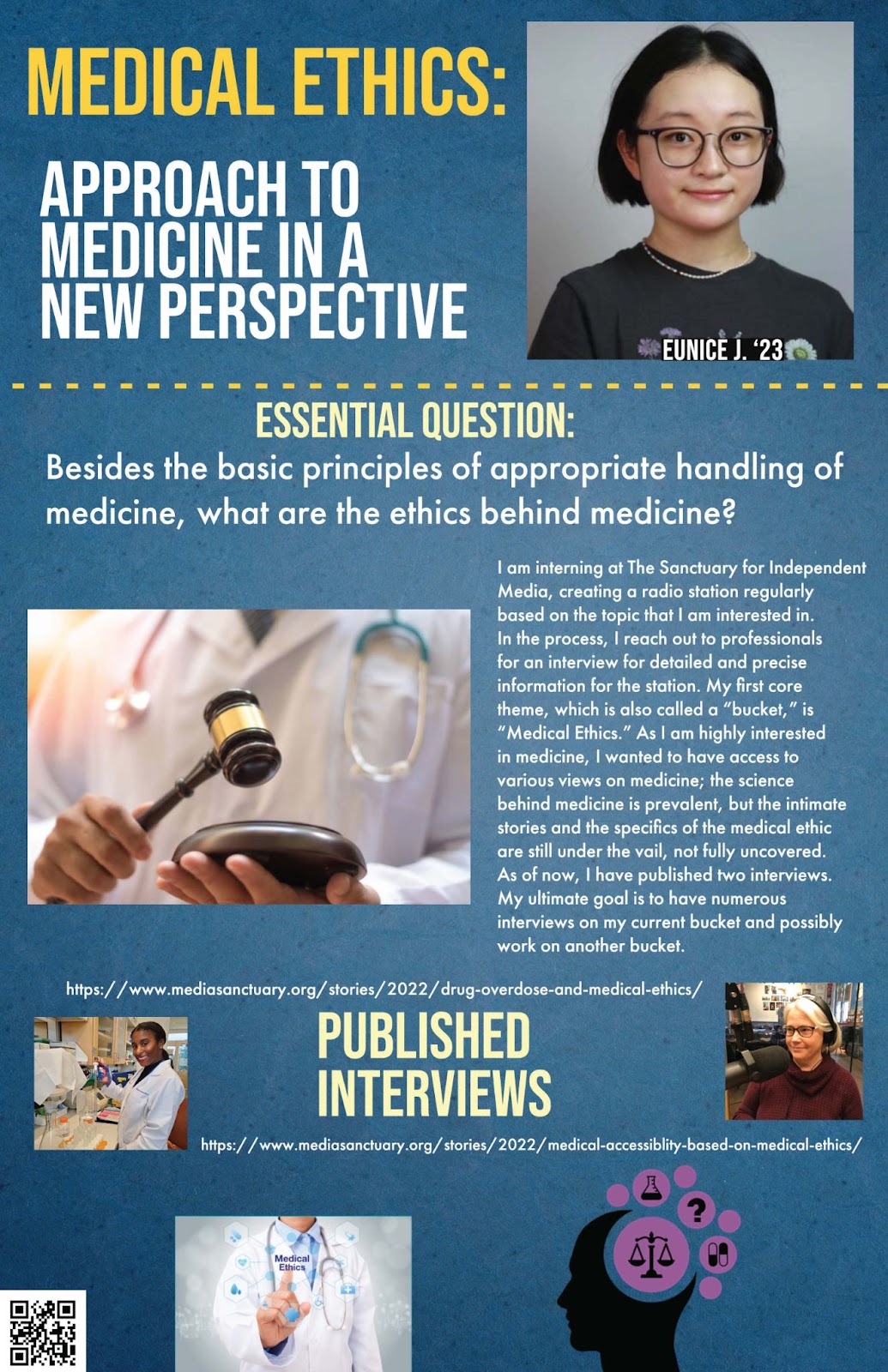 Signature Steam Research: Rpi And Flow Boiling, In Partnership With An Emma Alumna At Ge Research
Website | Video Presentation
I have been participating in a research project with scientists at RPI. The experiment will demonstrate the different regimes of pool boiling. Pool boiling is defined as boiling from a heated surface submerged in a large volume of stagnant liquid. The liquid undergoes four major regimes during pool boiling, i.e. natural convection, nucleate boiling, transition boiling, and film boiling. One of the applications of pool boiling is that it is used to make cooling systems. Nucleate boiling, one of the regimes during pool boiling, effectively disrupts the stagnant layer and significantly improves the ability of a surface to transfer thermal energy to the bulk fluid.
During the trial for the experiment, we realized that it is important to have the heated surface fairly submerged under the liquid but not too deep because the liquid will take longer to boil due to the hydrostatic pressure; this is an observation the RPI team made while carrying out the experiment.
My experience doing this project has been good thus far. I have had a lot of interactive work with scientific articles and reports. This has given me more practice as I will be writing a report for my experiment. 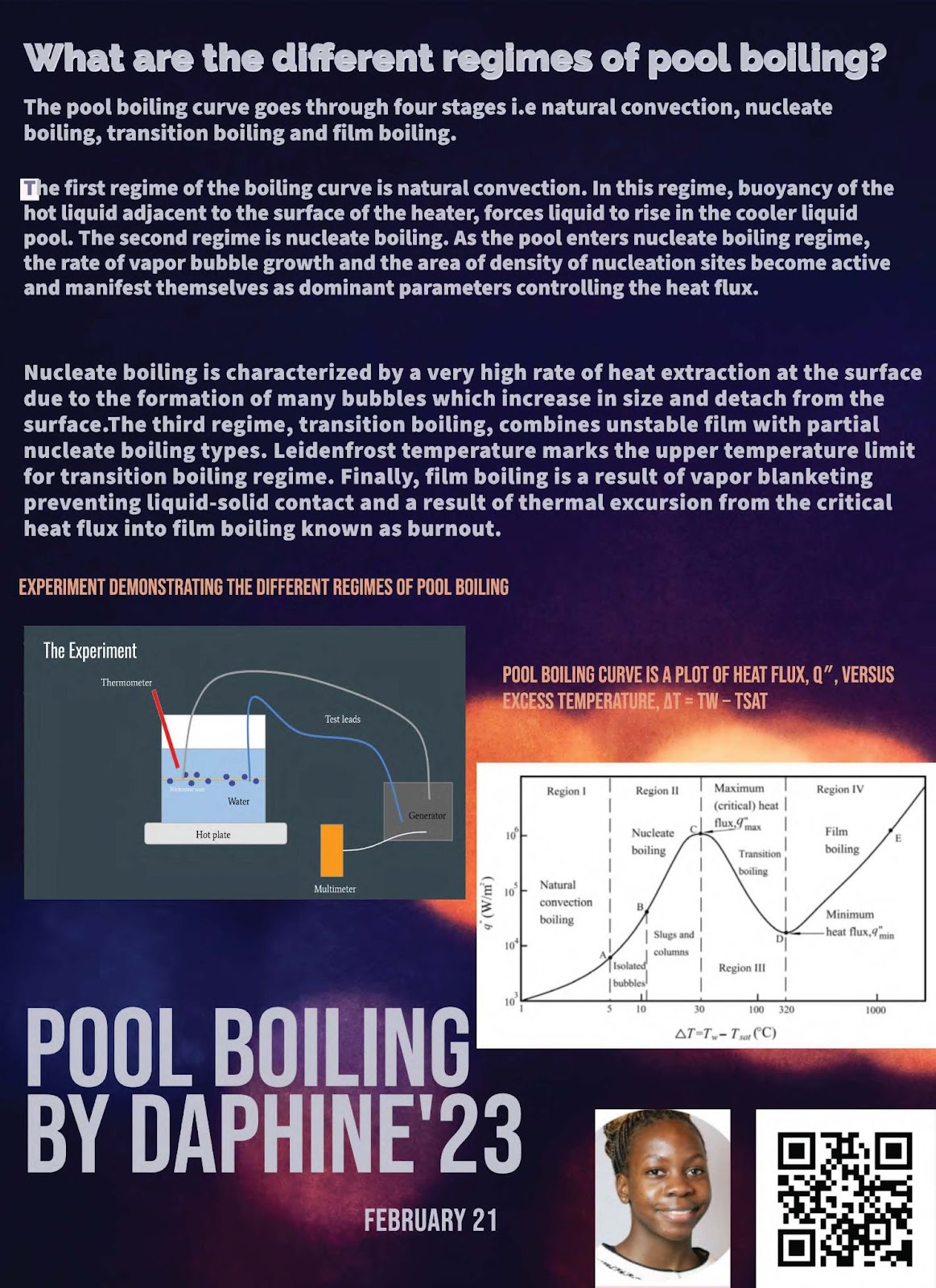 Signature Steam Research: RPI And Computational Research Of Carbon Nanotubes
Website | Video Presentation
I worked with RPI chemical engineering professor Nihat Baysal to create molecular dynamics simulations. I was fortunate enough to create my own project after reading some of Dr. Baysal’s work and deciding on one to expand upon. I chose to examine the efficiency of functionalized carbon nanotubes as a storage solution for greenhouse gases, particularly methane, after Dr. Baysal and his team already looked at carbon dioxide. I was drawn to this topic because of its real world application to climate change, as well as complete lack of knowledge of carbon nanotubes prior to this project. I spent the first part of my time with Dr. Baysal learning how to use the molecular dynamics software, Xenoview, slowly building up my skills to be able to create my final simulations. After running and collecting data from these simulations, Dr. Baysal and I began analyzing our data by looking at variables such as temperature, size, and functionalization. 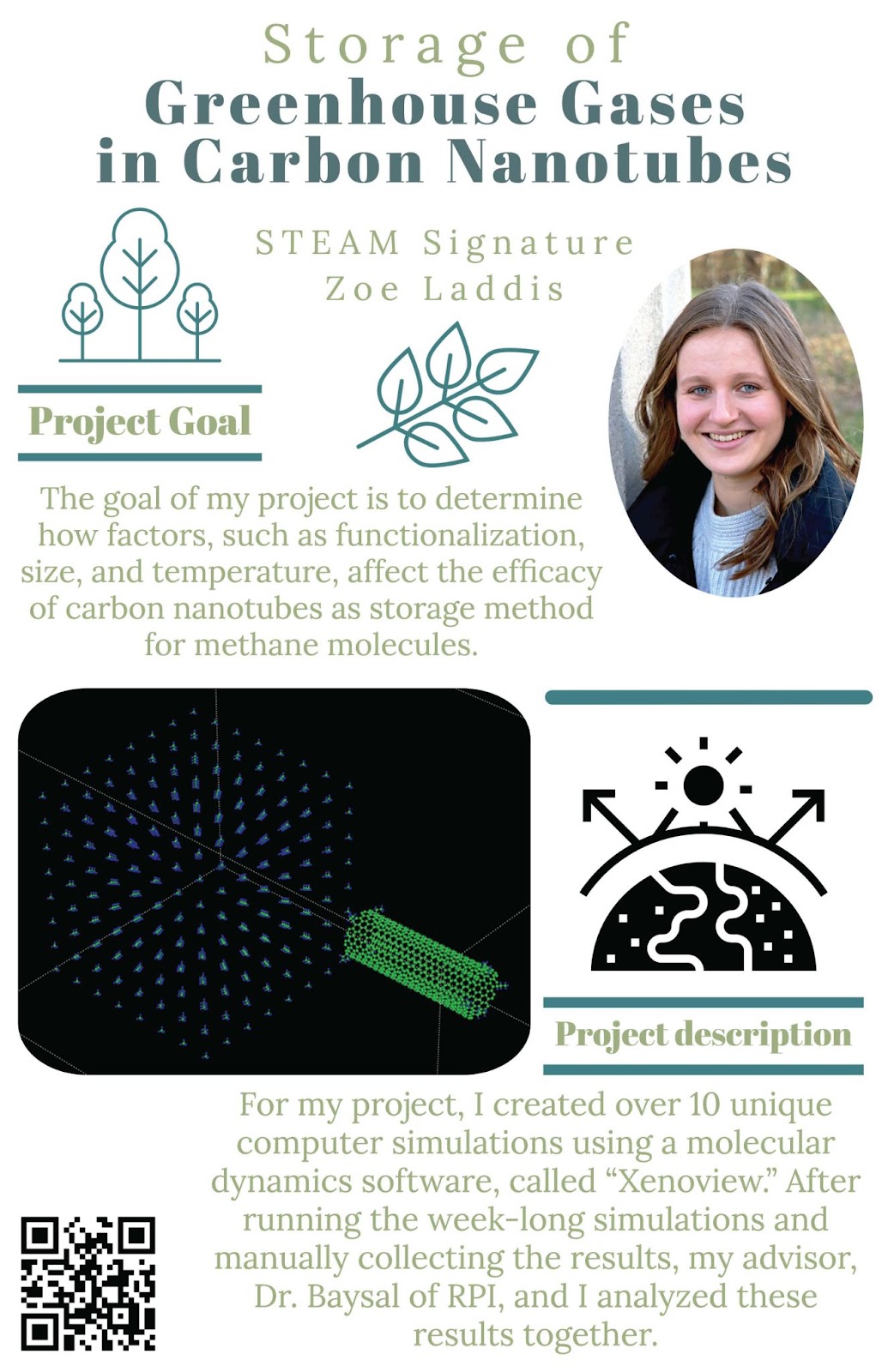 Signature Steam Research: New York State Food Lab Food Testing Videos
Website | Video Presentation
When I first began my STEAM internship with the New York State Food Lab, we explored different ideas about how we could put video technology to use in the lab. We discussed sharing this information with the public, in an effort to create more transparency in the food testing industry. We also talked about making videos depicting steps specific to different procedures that could be used for training new staff. Our solution was to create a video showing the steps of receiving and handling new samples that have arrived. While it has not been used yet, we hope the video can be used as a tool in the process of preparing new people to work in the lab. 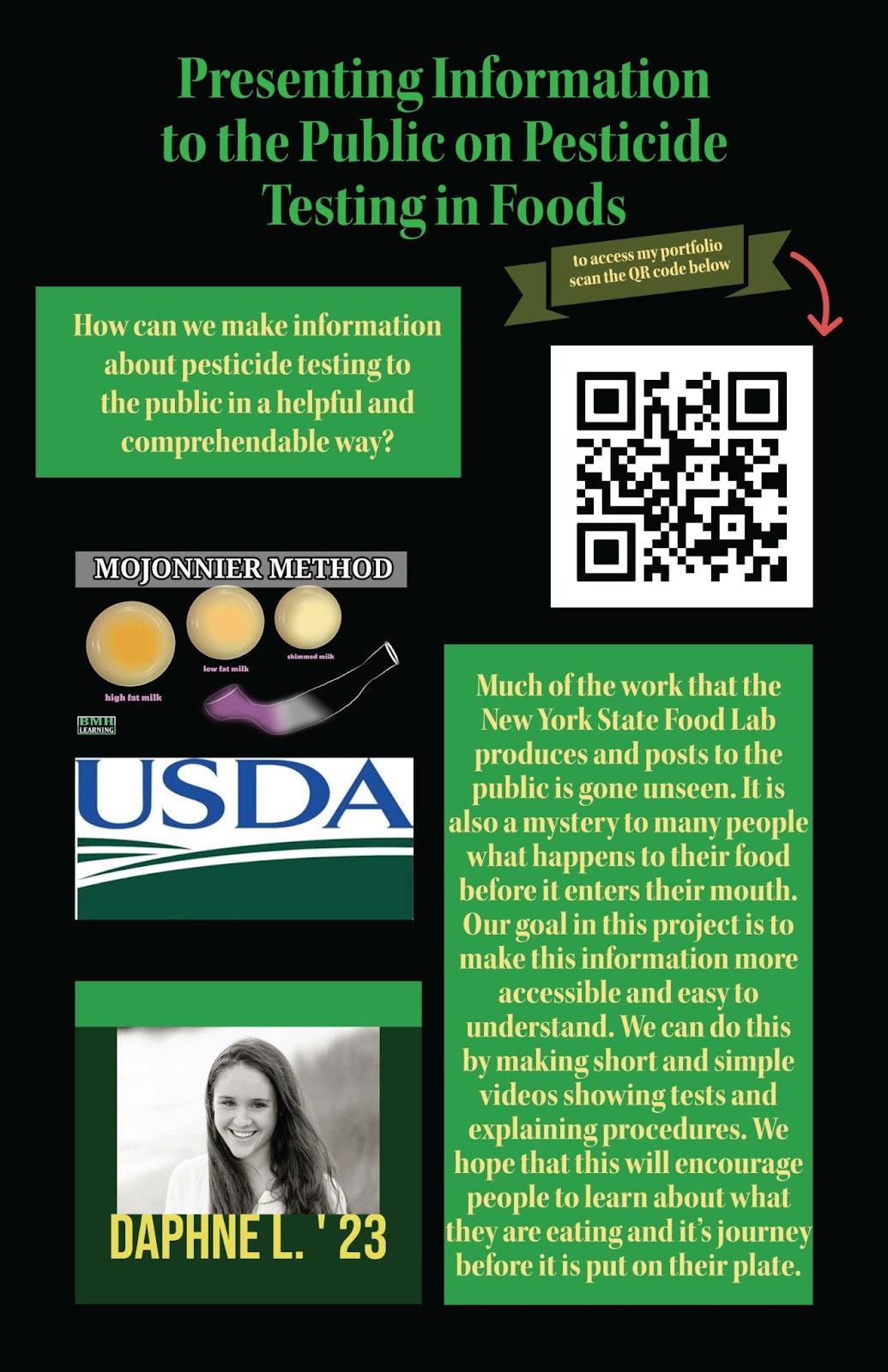 Signature Steam Research: RPI Materials Sciences For Solar Cells
Solar cells are an integral part of the future of sustainable energy sources, but how can new solar cells be engineered to be more efficient and more easily mass-produced? I have been able to investigate this question by working with Ru J., a doctoral student affiliated with Dr. Jian S.’s materials science lab at RPI. Through this process, I have learned how to identify problems, identify specific properties of materials that could solve these problems, and how to produce these materials for testing. I am taking with me a strong foundation of critical thinking and the skills to apply science to real-world problems.

Signature Steam Research: University At Albany Neuroscience Of Vomeronasal Axons
Video Presentation
In Dr. Forni’s lab at the University at Albany, we are currently studying a population of neurons called gonadotropin-releasing hormone-1 neurons (GnRH-1). These neurons form in the nose and move to the hypothalamus during embryonic development where they affect the maturation of the individual – but the exact physiological role of these neurons is unknown. We are currently tracking the migration of GnRH-1 as it moves from the olfactory nerves to the brain in mice using Olfactory Marker Protein to stain our mice models’ cells. We are also analyzing the interaction of GnRH-1 with other genes (including Fezf1) and other cells (including vomeronasal sensory neurons) to aid in our analysis of the role of GnRH-1.
Our research surrounding GnRH-1 neurons also aids in the research surrounding Kallmann Syndrome, a disease characterized by a combination of hypogonadotropic hypogonadism (issues with the pituitary gland or hypothalamus resulting in issues that arise during puberty) and olfactory defects (issues with the sense of smell). Previously, scientists believed this disease was caused by the route of olfactory or vomeronasal axons that GnRH-1 neurons supposedly traveled along during development. Our research suggests a different pathway for these neurons entirely, meaning we are on our way to finding the real reason Kallmann Syndrome exists– and one step closer to being able to treat those affected with the disease. 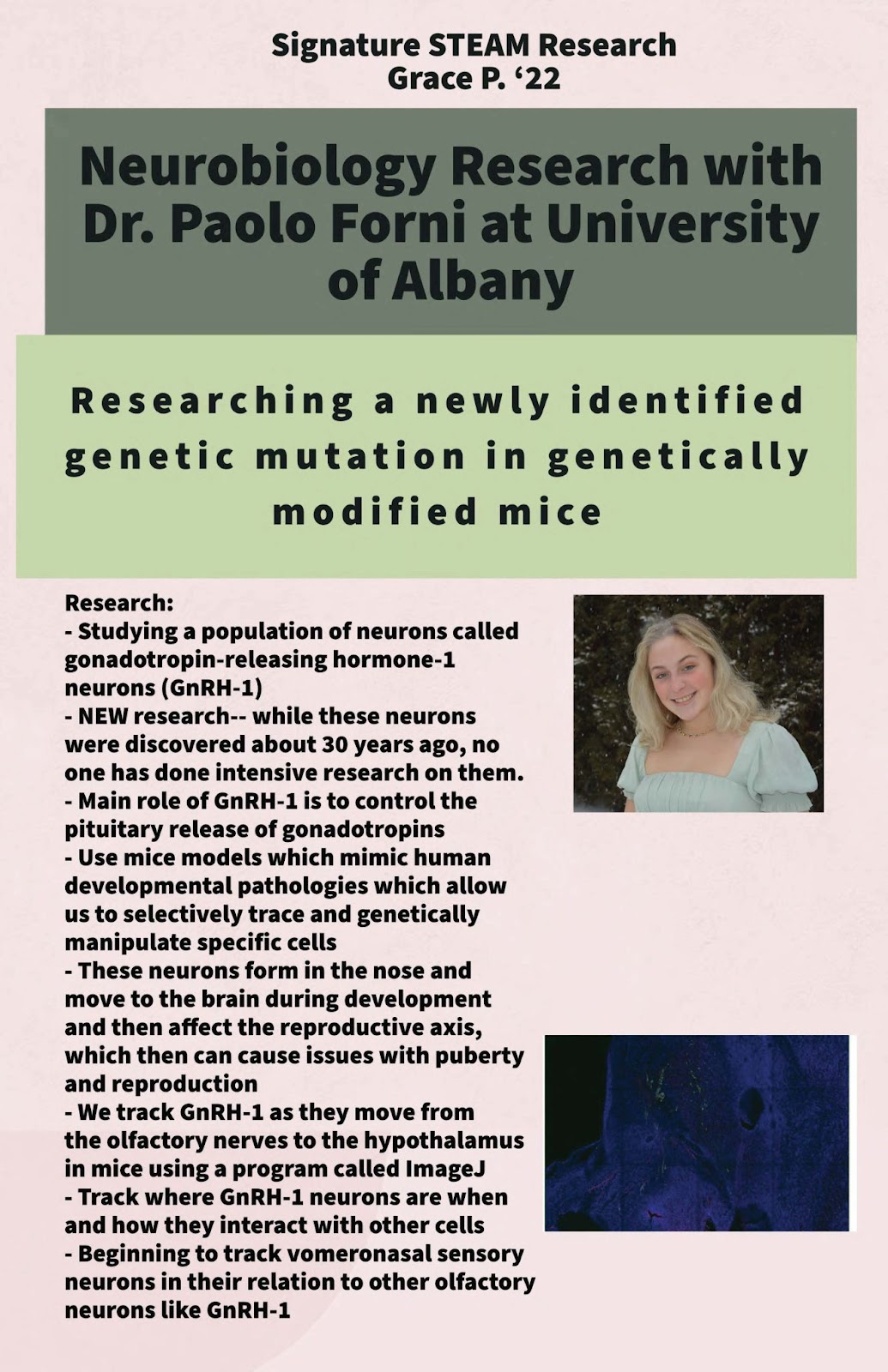