Creating Notice, an App to Match Organizations with Volunteers
Website | Video Presentation
Notice helps volunteers find service opportunities efficiently, and service organizations be noticed. Our app builds a culture of service by matching volunteers by their skills, time, location, and contributions to causes they passionately support. Most importantly, Notice Volunteer gives young people the chance to explore and experience different areas of service and work, which our team knows will benefit them in the years to come. We were inspired to build Notice volunteer when we realized how difficult it was for smaller service organizations to promote their work and recruit volunteers, and for those volunteers to find opportunities that interest them and are easily accessible. We are aiming this app toward a high school/college student demographic. Some websites provide a similar service. However, Notice Volunteer's mobile app form makes the task of signing up for a volunteer opportunity faster and easier to find and use.
Awards:
Winner of Best Use of Google Cloud - SWE Hacks ’22 @ University of Washington
Winner of Best User Interface / App - LeafHacks ’22
Currently Working With:
The Albany Boys and Girls Club
The Regional Food Bank
Joseph's House
The Red Bookshelf
Unity House 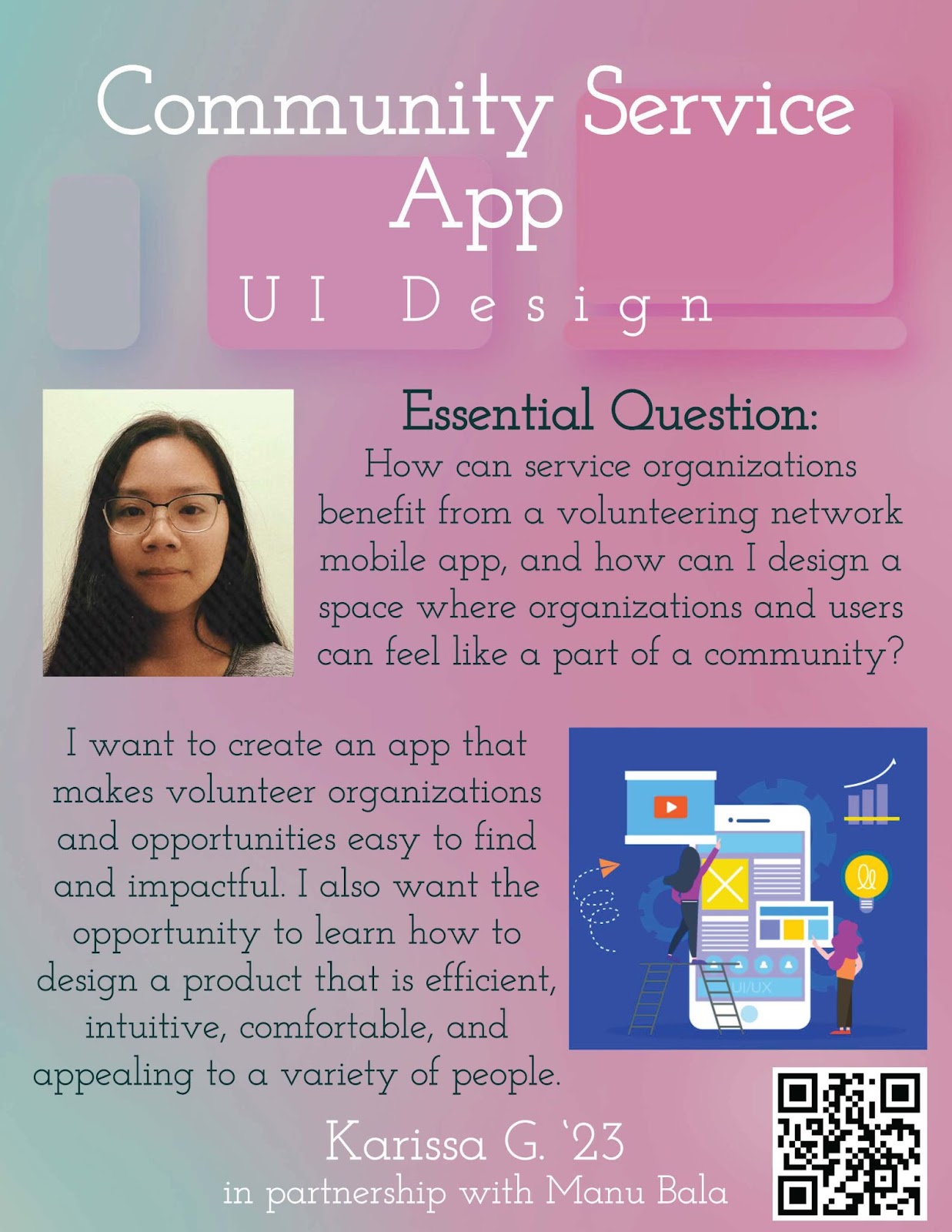 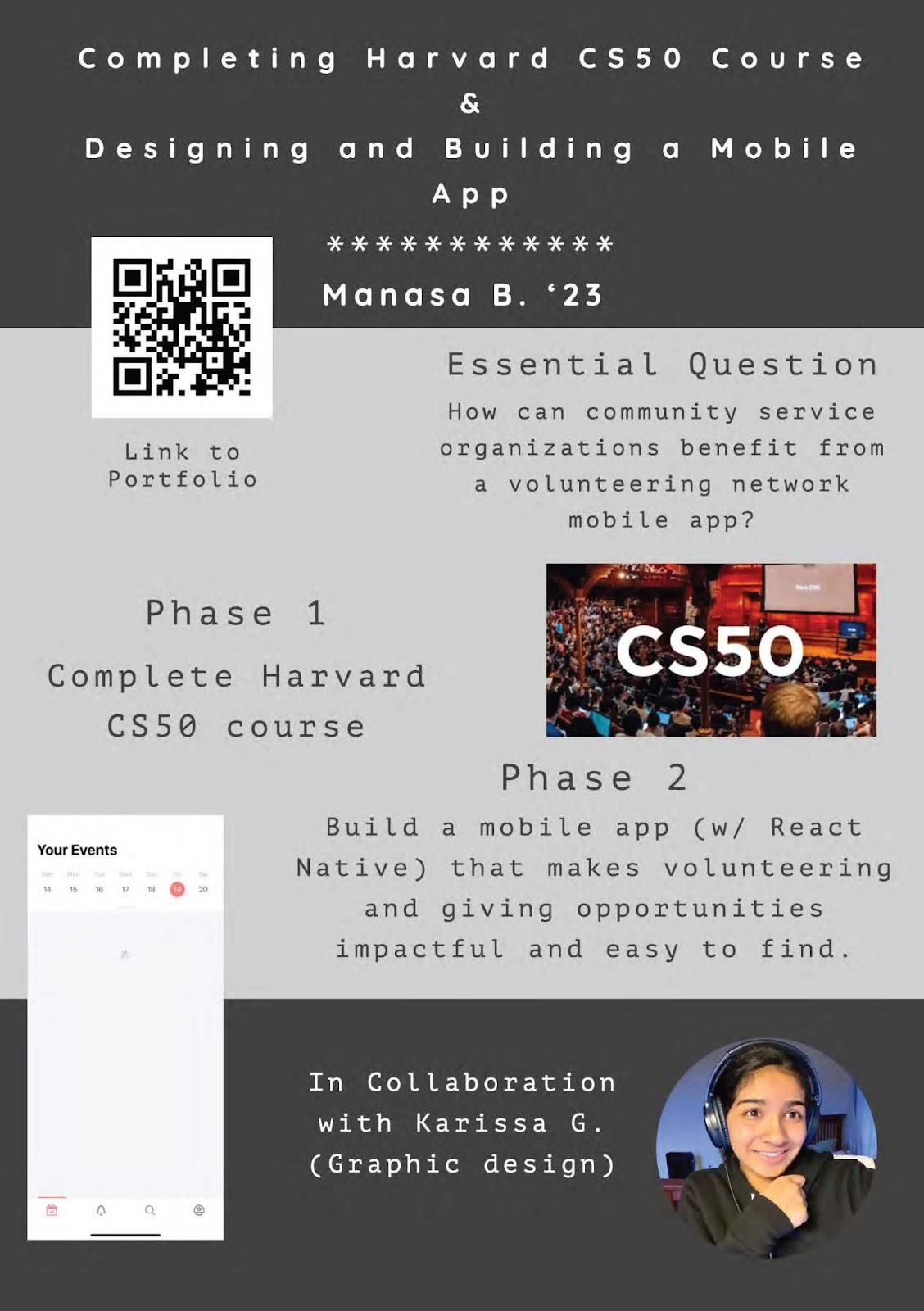 Misogyny in the Gaming Industry
Website | Video Presentation
My project is researching the misogyny in the gaming industry. Even when you search up the word ‘gamer’ or ‘famous gamer’, almost all of the pictures that come up are of male gamers, you will rarely spot an actual picture of a female gamer. There is a huge problem with how women are treated; they are constantly belittled, mistreated by the industry and told that they are not good enough gamers just because they are women. We see this in the difference in number of viewers that they get, the amount of hate comments, and the number of subscribers/followers. Many people have said that the reason behind this is because there aren’t enough female gamers, but in fact 45% of gamers are female. Clearly there are plenty of female gamers, and the problem obviously lies with the industry that encourages treating female gamers badly and unfairly. This leads to them not being able to reach high milestones such as being in any of the top Twitch categories (for example,being the most watched or most followed). A proposed solution would be to create a new platform similar to Twitch which is controlled more by female moderators and requires players to agree to new terms of service which would allow females to have a safe place to stream, and not have to always be afraid about the hate they might receive simply for streaming what they enjoy playing. This new platform could potentially become bigger than Twitch and overcome their power in the industry. 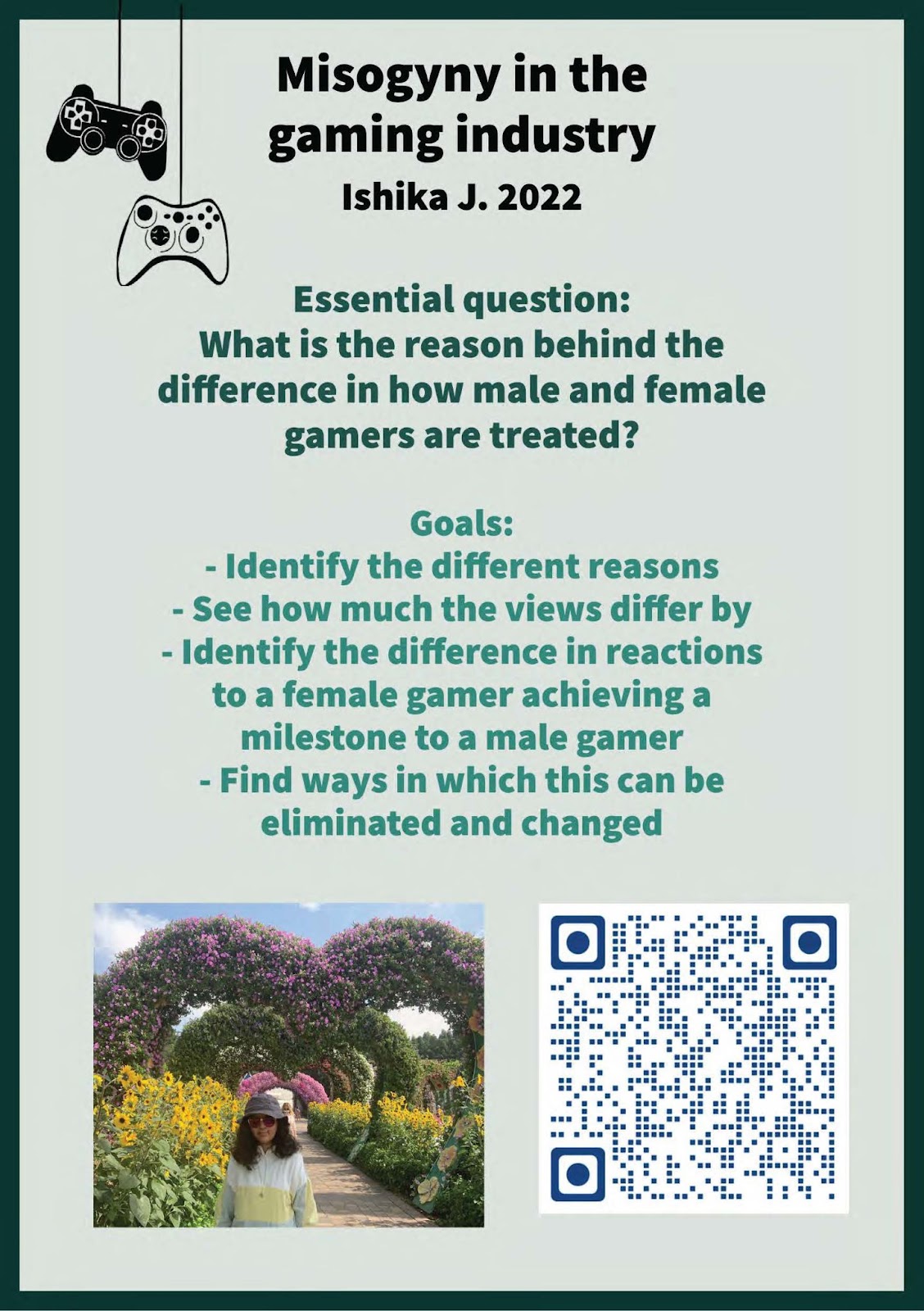 Discussion Of Women Empowerment Related To Current Events
Website | Video Presentation
I have created one video, one article, one interview and finished two media materials around the topic of discrimination towards women in the field of Gaming and Dresscodes. A video about Video Game industry and problems in China and one annotated bibliography about “gender opposition” was created as I explored the connection between capitalism, gaming industries and preconception towards women according to my experience with gaming since I was 12. At the same time, I learned plenty of skills about how to construct an informative but not boring video as I explore different video making procedures, backgrounds, soundtrack, memes to add in, and images to go with my content.
After the video was published, I have received a lot of constructive feedbacks from my audiences and realized my flaws in style or POV I’m speaking from, so I took my time to conduct 1 interview with another women empowerment activist in my age and finished a book called “Fang siqi’s first love paradise” and a movie called “Lolita” inorder to explore the idea of sexual violence connected to women’s dresscodes. I wish to tackle the problem from a more personal perspective because I learned the audiences have a much lower tolerance towards unequal opinions if I try to speak for the general public, so the movie and the book is a guide I wish to use to bring the audiences into my perspective of seeing these events. I’m currently finishing the draft for my second video and is planning to film it after AP week, my goal is to get it done before signature presentation. 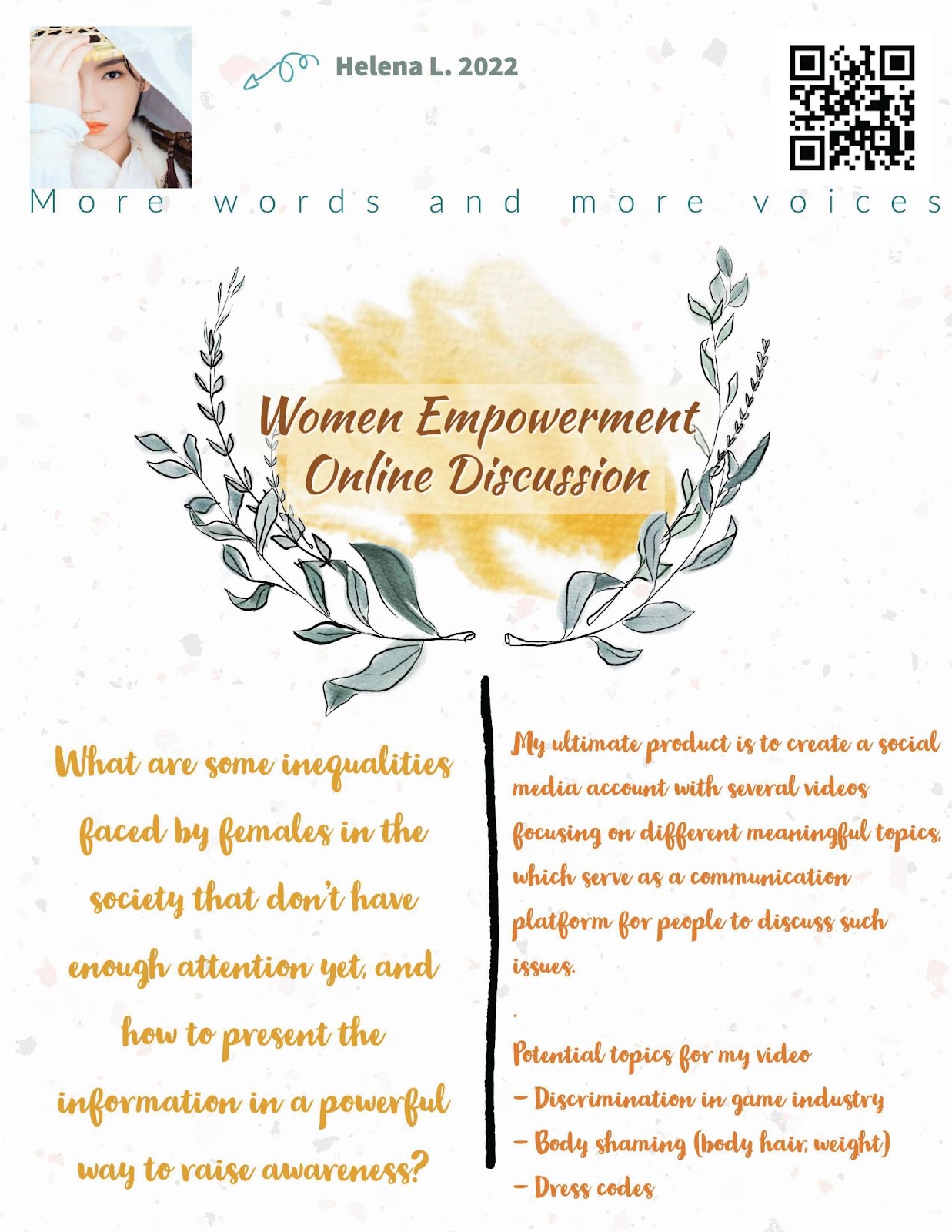 Digital Censorship in Myanmar
Website | Video Presentation
Ever since the military coup in Myanmar on February 1, 2021, the Myanmar military has imposed laws to restrict communications and access to information of Myanmar citizens. These laws restrict the flow of information through methods including but not limited to restricted access to the internet, social media bans, arrests of anyone with VPNs on their phones, etc. For my Signature project, I made a podcast episode about the ways that the digital lives of Myanmar people have changed due to the new laws implemented by the military regime. In the episode, I include the summary of laws imposed by the military and personal stories about how my friends and family’s lives have been affected by the digital dictatorship in Myanmar and how they are adjusting to the new lifestyle. This project has allowed me to learn more about what is going on at home in Myanmar and connect with my friends and family about how their lives have changed under the iron-fisted rule of the military regime that will do anything to ensure the isolation of Myanmar people from the rest of the world. 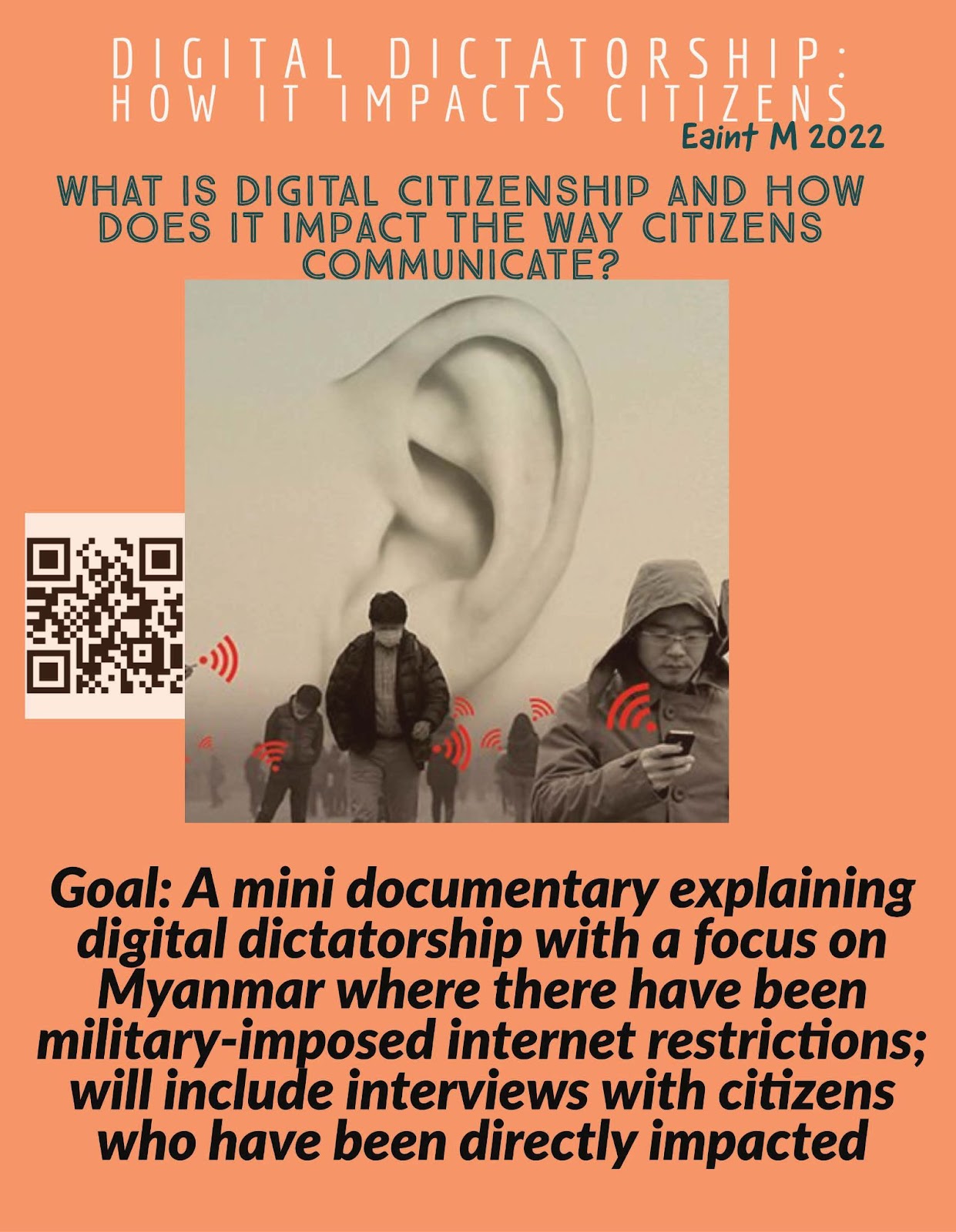 Completing the Harvard CS50: Introduction to computer science online course.
Website | Video Presentation
The easy access to news and media allowed me to grow up in an environment that not only spurred creativity, but ingrained a sense of urgency to help the social problems that arise everyday. As the technology sector has become more prevalent, innovative and promising than ever before, I find myself interested in the power of technology: how can I utilize technology to tackle a social problem? By taking the Harvard CS50: Introduction to Computer Science course, I hoped to be able to find an answer or find my first step to answer this question. The course offered a glimpse into big concepts such as abstraction, data structures, encapsulation, software engineering, and many more. The labs, numerous problem sets, and hour-long lectures allowed me to become familiar with languages: C, PHP, Javascript, SQL, CSS, and HTML. With foundational knowledge from the course, I hope to merge my social enterprise and programming skills to create an app that aims to reduce food waste while generating revenue. 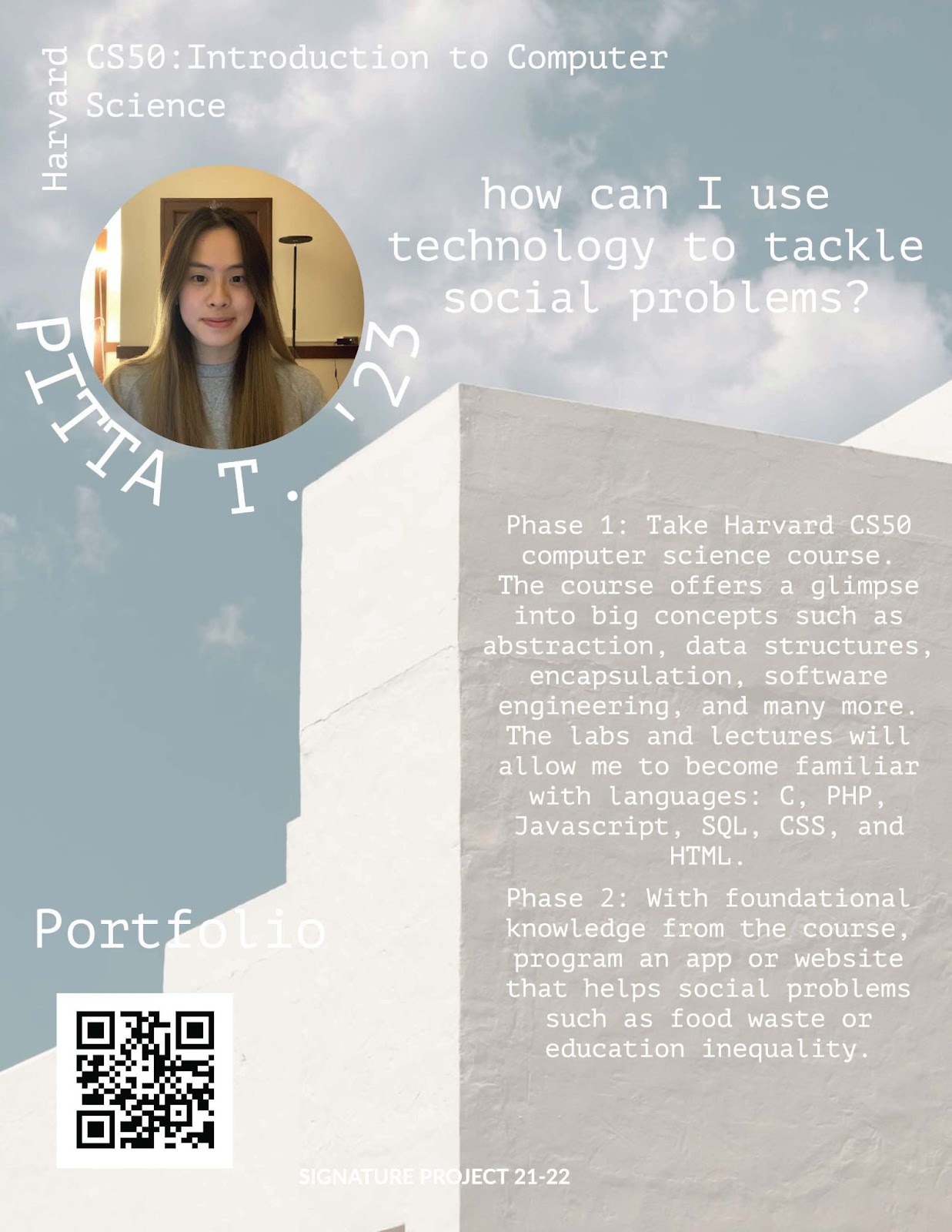