A Requiem for the Living, A Book
Website | Video Presentation
I wrote and self-published a novel for teens and parents/mentor figures of teens based on data that I gathered from surveys I sent out to my peers. The novel, A Requiem for the Living, is about an international two week sleep away camp at Oxford, England. It is a coming of age tale about experiencing new things and self-advocacy. I completed both my Signature and Girl Scout Gold Award Project by hosting book signing and book match events. This means that for every one book someone bought, I donated one book to Girls Inc. at a book signing event. Overall it was a very fun experience that helped me better my time management skills and make my inner thoughts a physical reality. 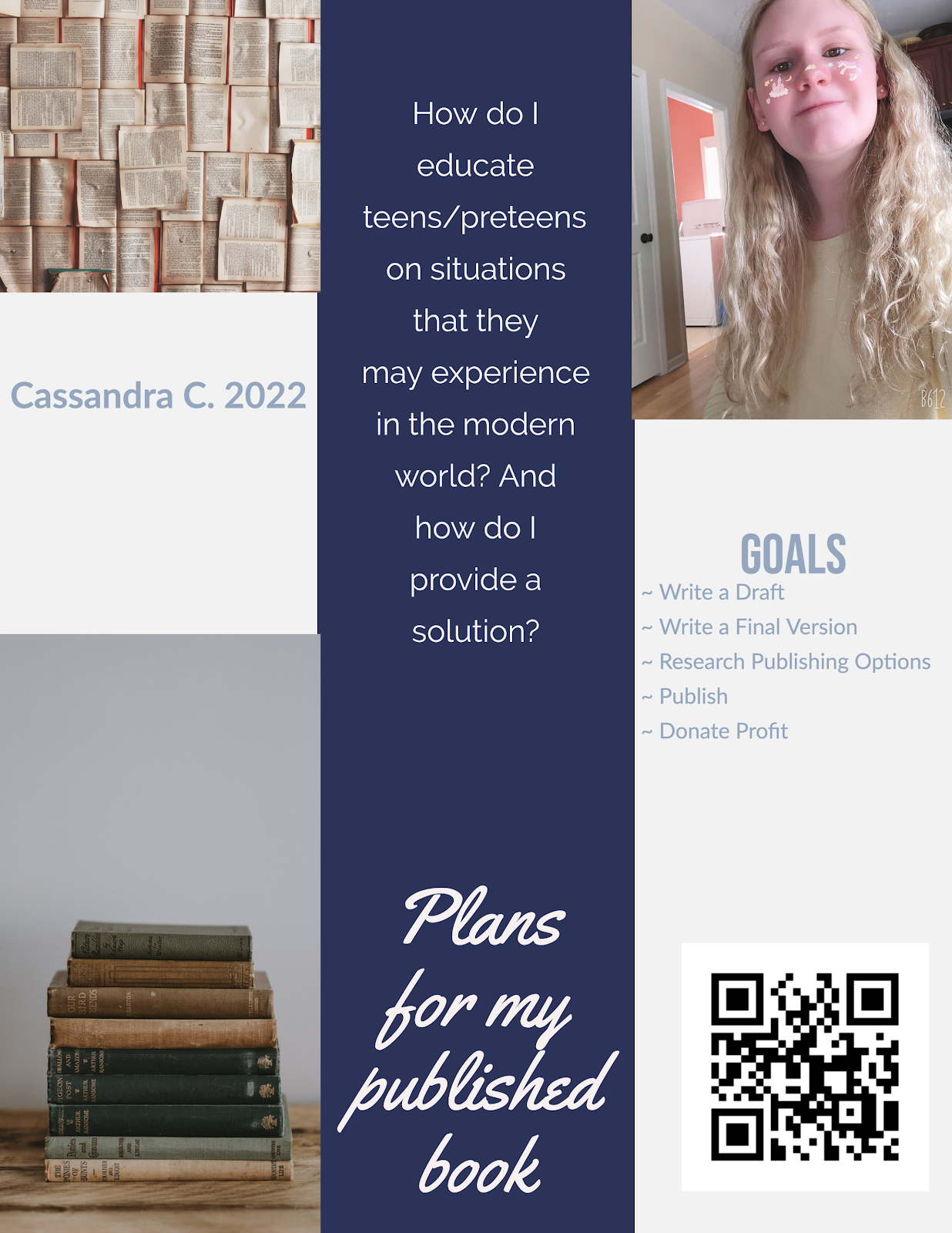 One Soul, Paid in Fulfillment: A play based on the German legend Faust
Website | Video Presentation
My project this year was to write the rough draft of One Soul Paid in Fulfillment, a five-act play based off of Elizabethan playwright Christopher Marlowe’s The Tragical History of Doctor Faustus. My goal with this play was to explore what it means to live life to the fullest, and what, if any, is the cost of happiness. What happens when my characters – and by extension, people in the real world – achieve their goals? Are they content and if not, what’s next for them? Where do they go after they’ve reached the top? What are they willing to sacrifice to find what they’re looking for?

A lot of my project was figuring out what these questions were, and what consequences followed each of the actions my characters took in response. Having them reckon with the choices they made in the beginning of the play, in moments of triumph, or despair, or just everyday life, were of equally vital importance later when the past came back to haunt the present. Writing this aspect was one of the more challenging parts of my project, along with picking apart Marlowe’s script and deciding what I wanted to take for myself. Sometimes I worked direct quotations into the dialogue, other times scenes and settings. I plan on continuing to work on this play over the summer and into college. For my next draft I hope to divert even further from the path and make what Marlowe created more my own by flipping events on their heads and prioritizing striking a balance between how my characters affect the world and how the world in turn affects them. Communication Methods in Competing Advertisements
Website | Video Presentation
For my project on the investigation of different visual communication methods in advertisements for soft drinks, I have first created the perceptual maps to figure out which 2 competing beverages I would want to use for my research and I came up with Coke vs Pepsi, and Red Bull vs Monster, these brands are highly similar to each other which will be helpful for my experiment. For my experiment, I have made a survey for people to fill out telling them to first pick a brand from Coke vs Pepsi, and also Red Bull vs Monster, after they picked I will show them the ads I have prepared that have certain advertisement technique in it, and see if their decision will sway, after that, I will collect data and do analysis on why the tester’s decision switched. Then based on the analysis I will identify the methods that are used in the ads, and inform the audience about them. I will also create a customer’s journey after helping the audience identify the techniques, to walk the audience through the journey of first seeing the products then how they were lured by the ads and how they have decided to pick the products by the end because of the ads. The outcome of the experiment is that I hope to identify the different methods used in the ads and be able to inform others about them based on my research, and analysis. 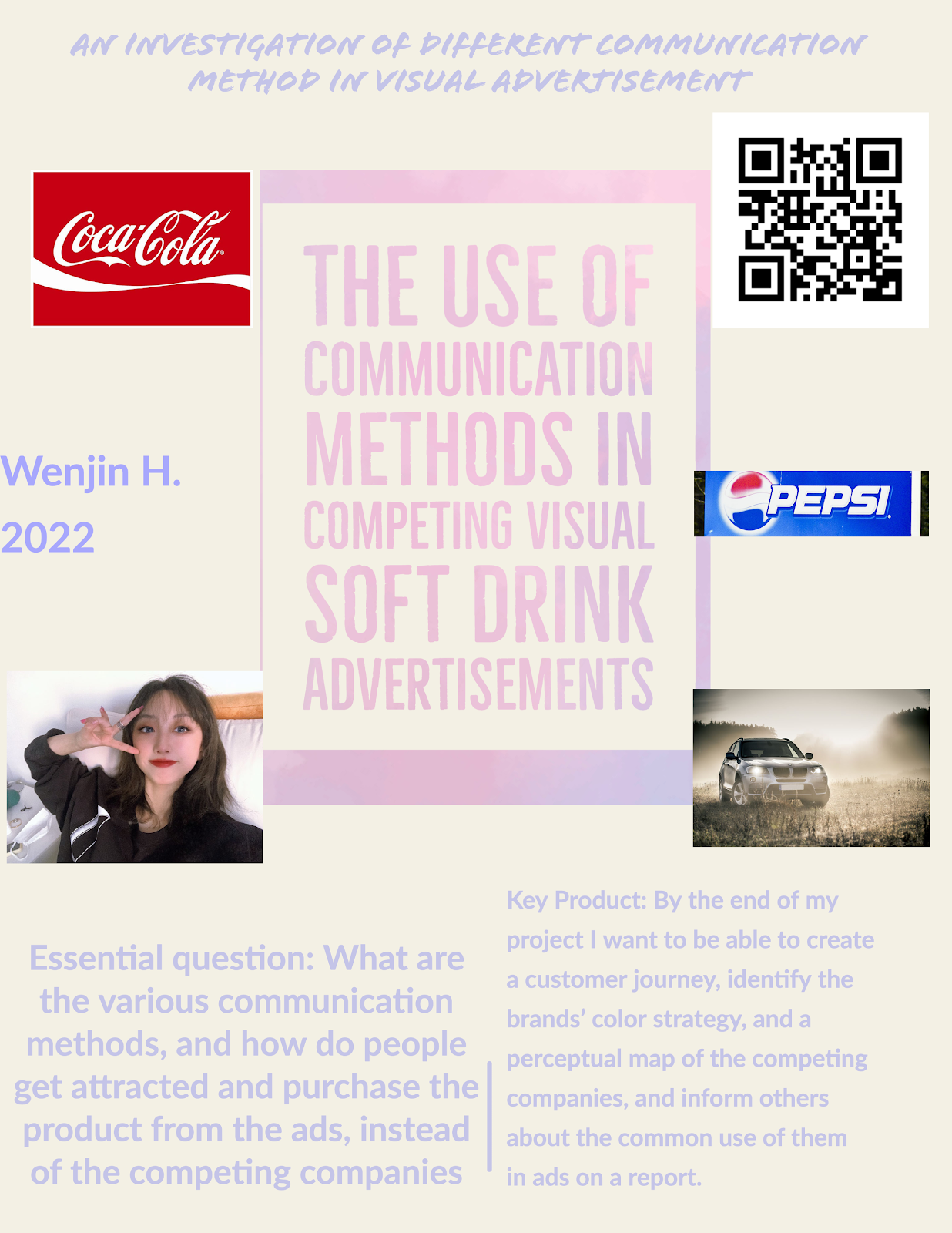 Thorough Understanding Of Political Extremism And Potential Solutions
Website | Video Presentation
Last year, I composed a research paper as my history final project. Writing the research paper wasn’t the easiest work. In fact, I remember how I struggled with the writing at the beginning of the process. Once I finished the writing, however, I found myself improving a lot as a writer and was very proud of the outcome. History and writing were something I’ve always been interested in, so writing a research paper seems a very effective combination of my two big areas of interest and a great chance to develop myself as a writer and historian. One of the historical topics which I find very interesting and important to learn about is World War II. I have a lot of questions on the topic, so conducting research on WWII and composing a paper seemed very compelling to me. Since I had too many questions on the topic while I was researching and brainstorming a thesis statement (which I mainly planned to focus on the causes of the war), I got easily distracted by other fascinating aspects of WWII. As a consequence, composing a thesis statement became a very difficult process. Also, after I started writing the paper, I realized that the writing part was also very hard because some evidence or sources contradicted my thesis, so I had to adjust some of my ideas and sources. Overall, my project was a combination of critical thinking, gathering sources, and logically connecting and articulating ideas, which take the form of a research paper. 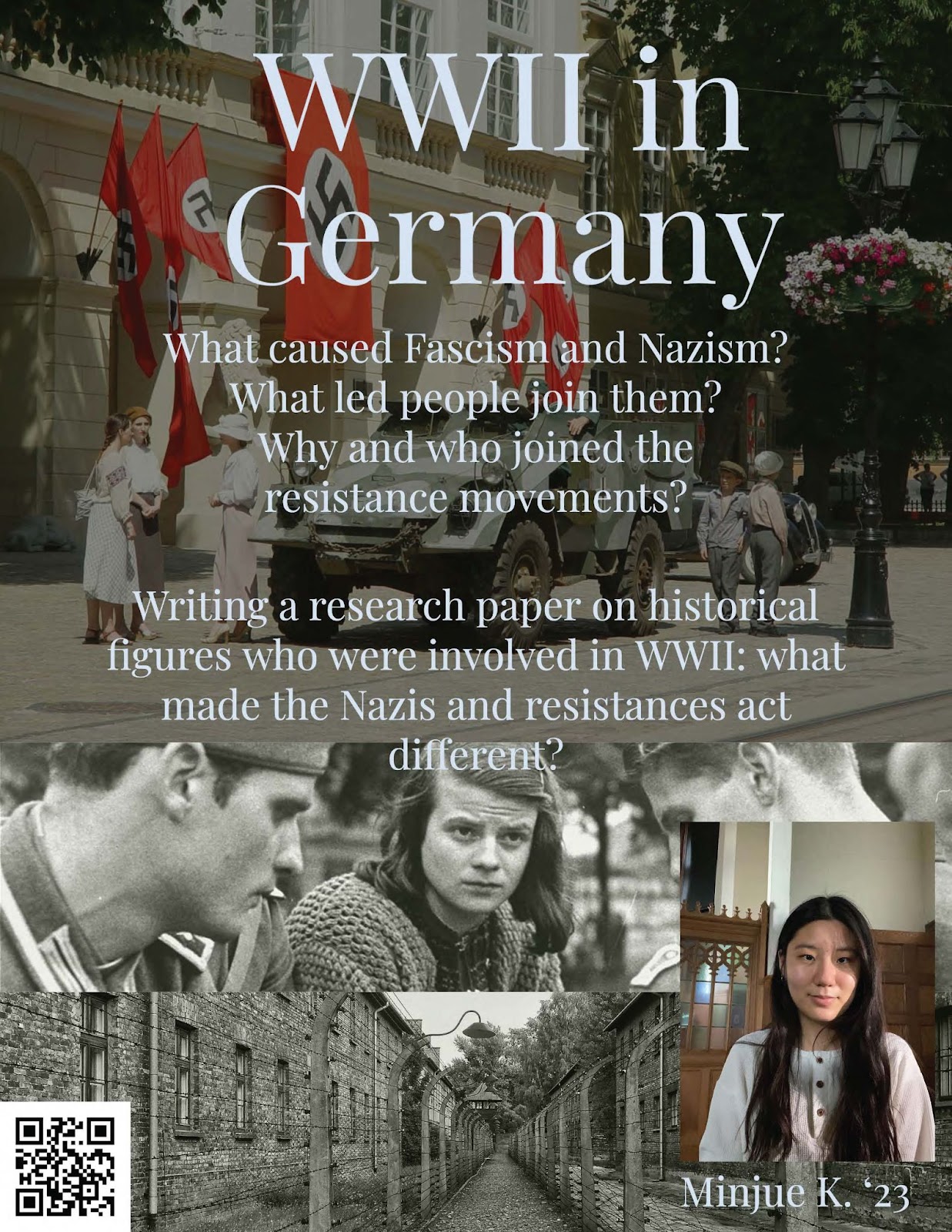 Video Game Addressing Mental Health Awareness
Website | Video Presentation
In recent times, the issue of mental health has emerged more and more into prominence. Many schools have students learn the intricacies of a healthy mindset at an early age. However, there are still two major issues at large. One, many does not mean all. For every school that educates its students, another does not. Two, most curriculums that do teach mental health are boring. It’s not anyone’s fault, it’s just teenagers are easily distracted. So I ask the question, what is something that can be engaging, fun, educational, and overall, be very easily accessible to the younger generation? Video Games!
Jill and I have put our time and effort into creating a video game that tells a compelling story, boasts a stylized yet accurate depiction of depression, and hopefully is fun and engaging to play. It tells the tale of a young teenage girl trying to survive the last few days of her school year while living with depression, absentee parents, and a struggling social life. She is followed by, Depressed Dog, a dog that is ready to embody her worst fears and nightmares sometimes with little to know warning. Jill has been doing a wonderful job coding all of this into existence, while Angel has been there to flesh out the piece, using storytelling, visuals, and game design. We hope that at the end of our project, we will have created a finished product that offers a different perspective to the very prevalent mental health issue of depression. 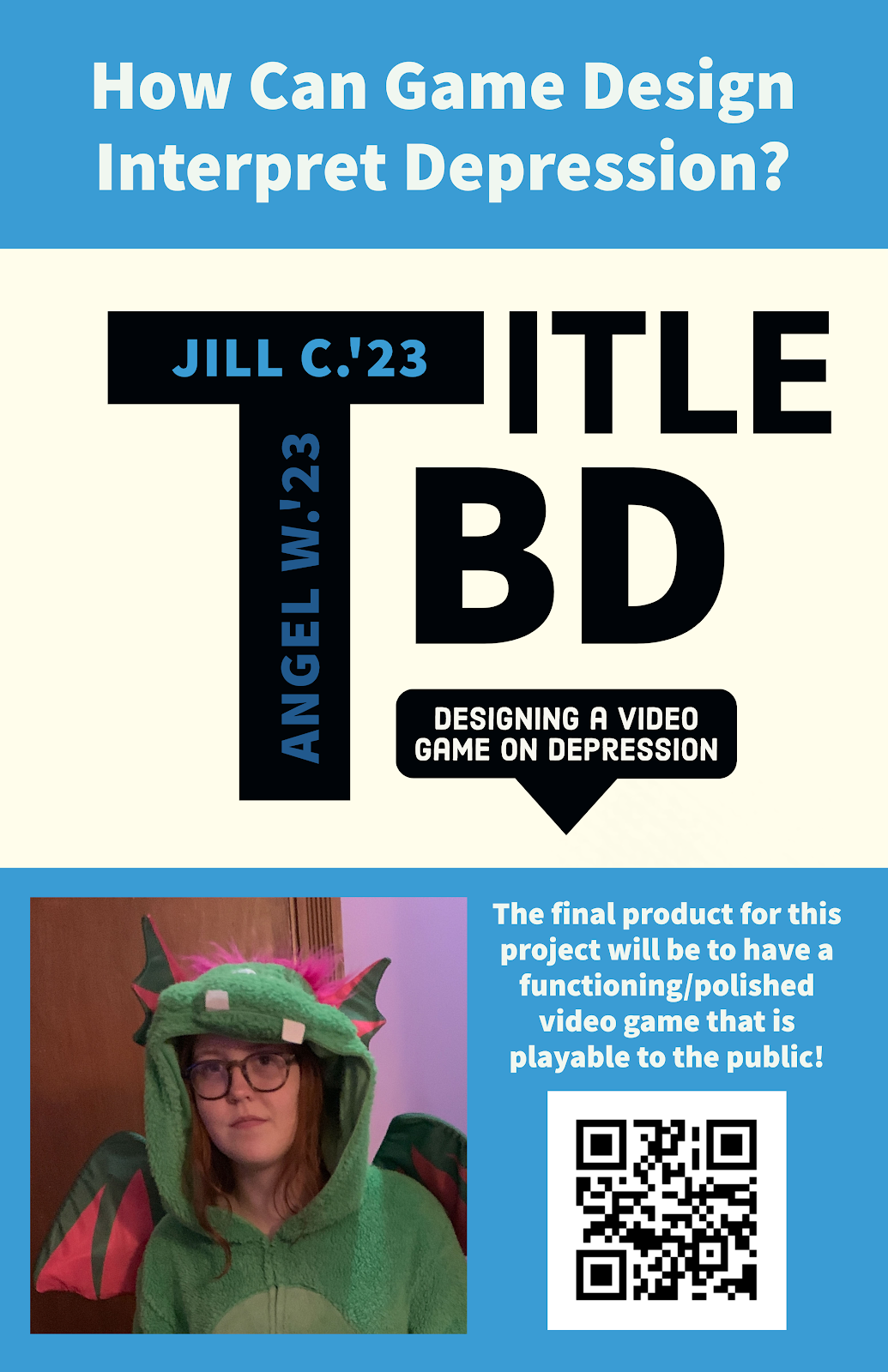 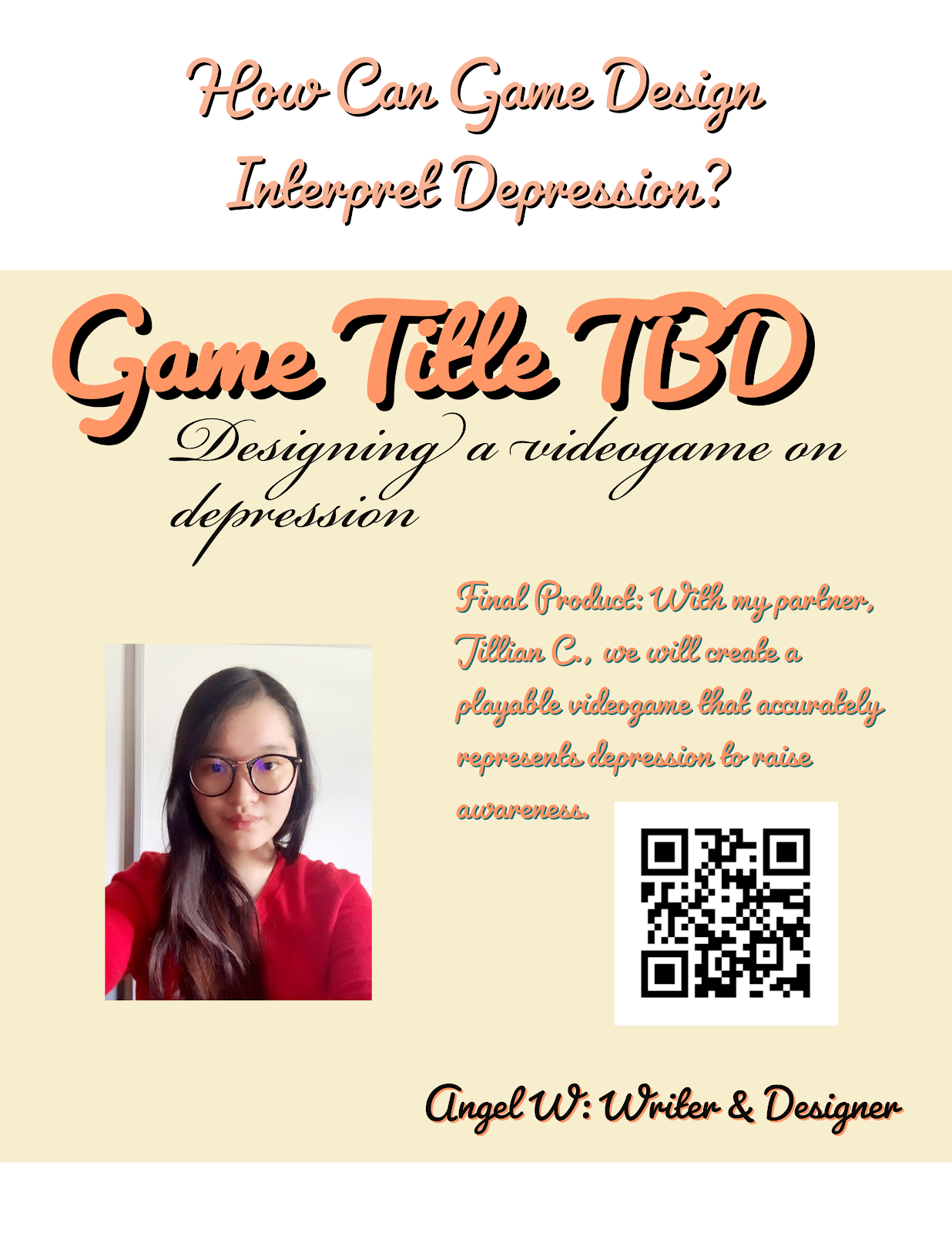