Ending Child Marriage In Bangladesh
Website | Video Presentation
My project covers the complex topic of child marriage in Bangladesh, with different sub-categories of low rates of education for children, lack of menstrual cycle education, and in general -misogyny. I started this project in junior year with the aim of fundraising money to keep the non-profit school my family runs open, by selling homemade jewelry. This year, I had the same mission of selling jewelry, collaborating with The MoonCatcher Project to provide reusable menstrual products to students in our school, while also writing a children’s book to empower young students to continue their education, rather than drop out. The reasons students in Bangladesh drop out of school at a young age has to do with low income/ economic instability and insufficient education surrounding menstrual health. It is common for parents to send their kids to school for a few years, but most schools in Bangladesh require supplies and uniforms which can be costly for many families. So, parents take their children out of school to find a job to earn money. In the case of insufficient menstrual health education, people believe that once a girl starts her period, she is now a woman, and can get married and take care of a family. She is then pulled out of school. In general, education for a young girl isn’t seen as important as education for a young boy. My goal is to start to break down that convoluted cycle of child marriage and the shortfall of education in young children. 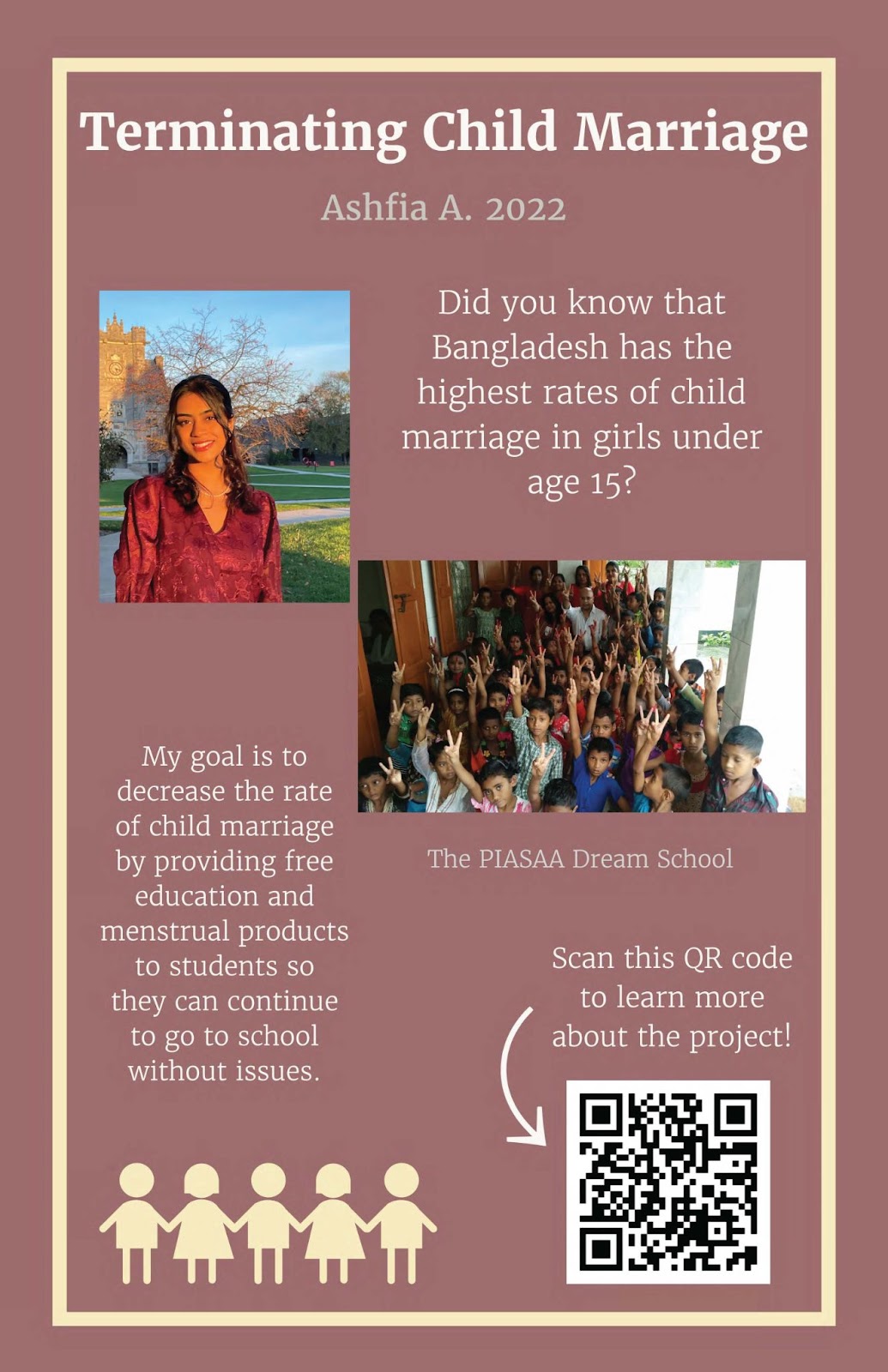 The Evolution of Anti-Semitism
Website | Video Presentation
The primary objective of my Signature project was to compose a research paper that analyzed and critically examined the evolution of anti-Semitism through a historical, cultural, and political lens. Over the course of this academic year, I traced the roots of global anti-Semitism through careful analysis of its historical and cultural manifestations and culminated my findings into a research paper. Throughout this process, I have greatly deepened my understanding of the parallels between anti-Semitism in the 21st century and the Nazi era, as well as the way in which the trauma of the Jewish people has manifested itself with each new generation. I have also begun to truly come to terms with the ways in which anti-Semitism remains a prevailing plague on all of the ideals that we, as global citizens, purport to hold dear: freedom, justice, and, perhaps most significantly, the dignity of human life. 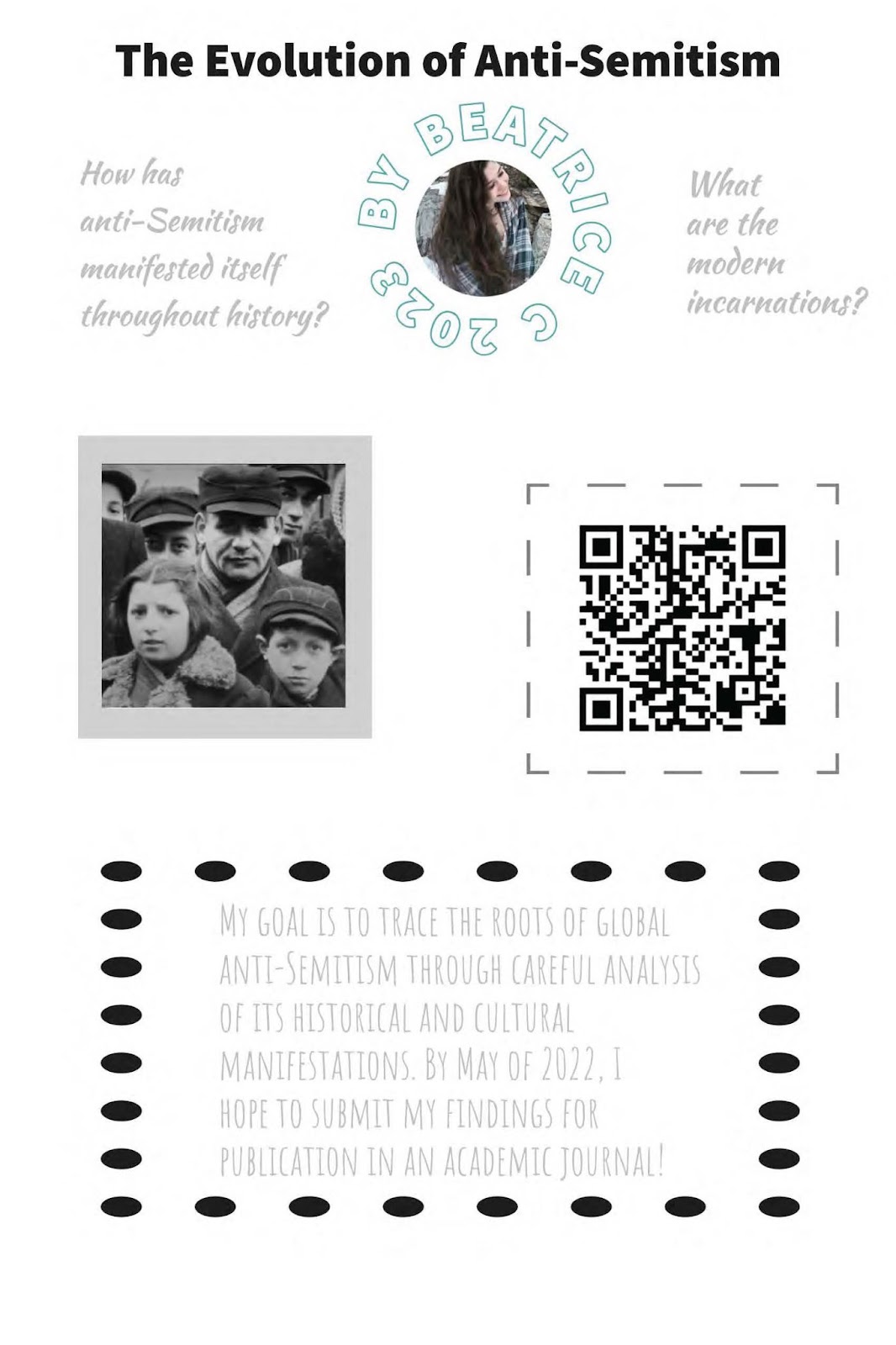 Violence Against Women And Girls: Exploring A Global Issue Through The Lens Of One Region
Website | Video Presentation
I started my signature project on Violence Against Women and Girls (VAWG) in the spring semester of my junior year. Before attending Emma, I lived throughout the Caribbean, in the islands of Trinidad and Tobago and the Turks and Caicos Islands. Despite growing up on an island that faces many issues regarding the VAWG, I was blissfully unaware of how, in a society already afflicted by crime, women were disproportionately vulnerable to this brutality and violence. I knew that I needed to educate myself on these injustices because it was clear that, despite the evident disparities in gender-based criminality, there was little urgency in addressing them.
With my project, I began the first step in educating myself by researching the legislation and preventive measures relating to the VAWG in Trinidad. However, as I continued with my research, I came across a disturbing fact: "Globally, 1 in 3 women experience physical and/or sexual violence in their lifetime," and I realized I needed to broaden my research. I looked into the history of gender-based violence and found that current acts of VAWG are "a manifestation of historically unequal power relations between men and women," and that this pattern is perpetuated by the lack of reporting and stigmatization of gender-based violence. In addition, I looked into how current events, like the COVID-19 pandemic, impact the VAWG. Although I still have a lot to learn, what I have discovered through my signature project has been extremely enlightening, and I want to continue this work. 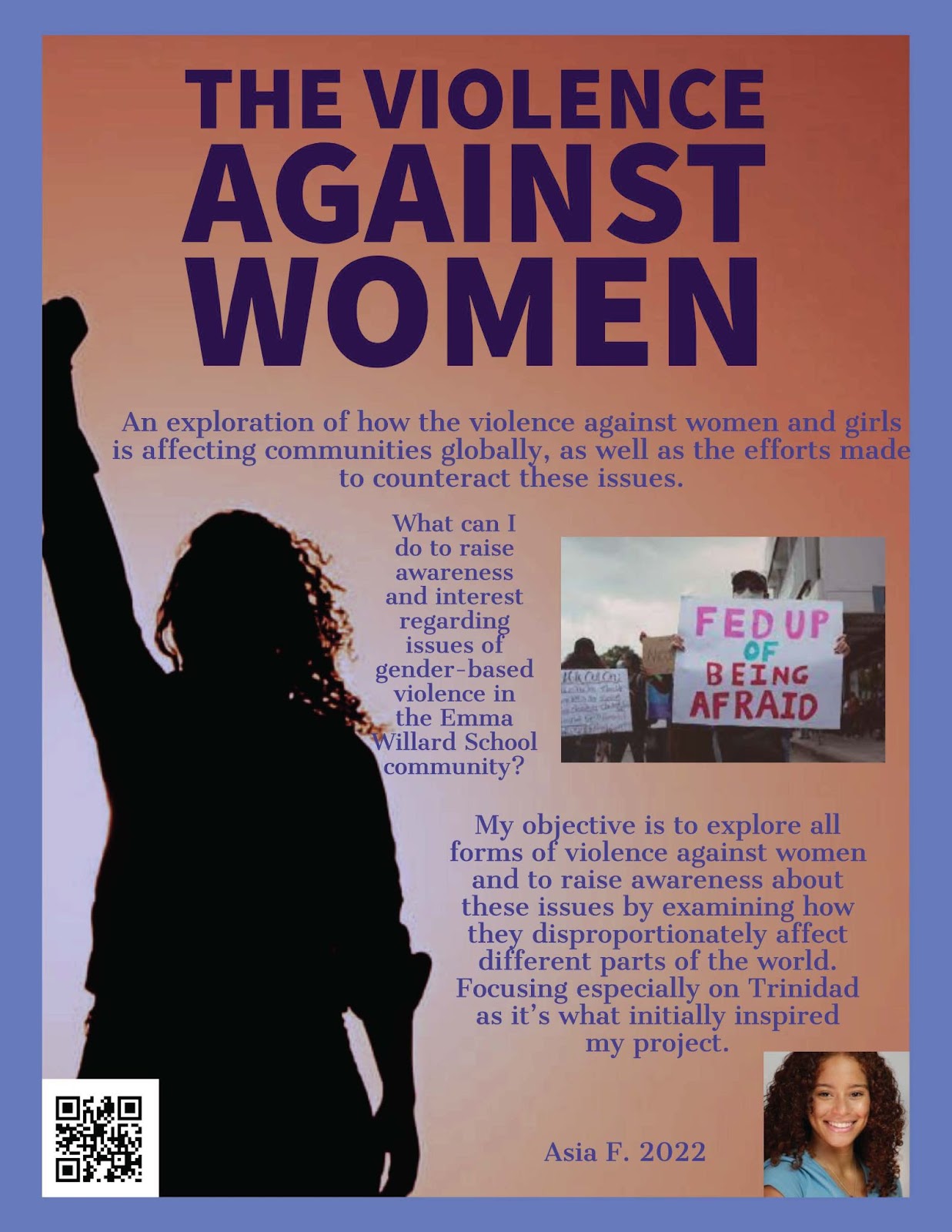 Indigenous Peoples In Surrounding Regions
Website | Video Presentation
Over the past year, my project has been focused on researching the Mohican people native to the land Emma Willard sits on, with the goal of examining and reassessing our relationship to Indigenous peoples in this country. In the fall I gathered data, extensively researched the history and timeline of colonization and displacement in our region of Upstate NY, and educated myself on the systemic struggles Indigenous People in America have faced for centuries. A common theme across my research was the amount of disputable or unconfirmed facts, which is reflective of the U.S’s history of silencing Indigenous voices and warping the U.S’s origin story away from one of deceit and destruction. The very thing making my project difficult was exactly why I felt it needed to be done.
The body of research that I then spent the spring refining and organizing to be accessible and distributable is a comprehensive look at the story of the Mohican people. I strongly believe that Emma Willard as an institution and community should be aware and respectful of the First Peoples of the land that we all live and learn on, and I hope to be able to share some of the work I’ve done with you on Signature Day! 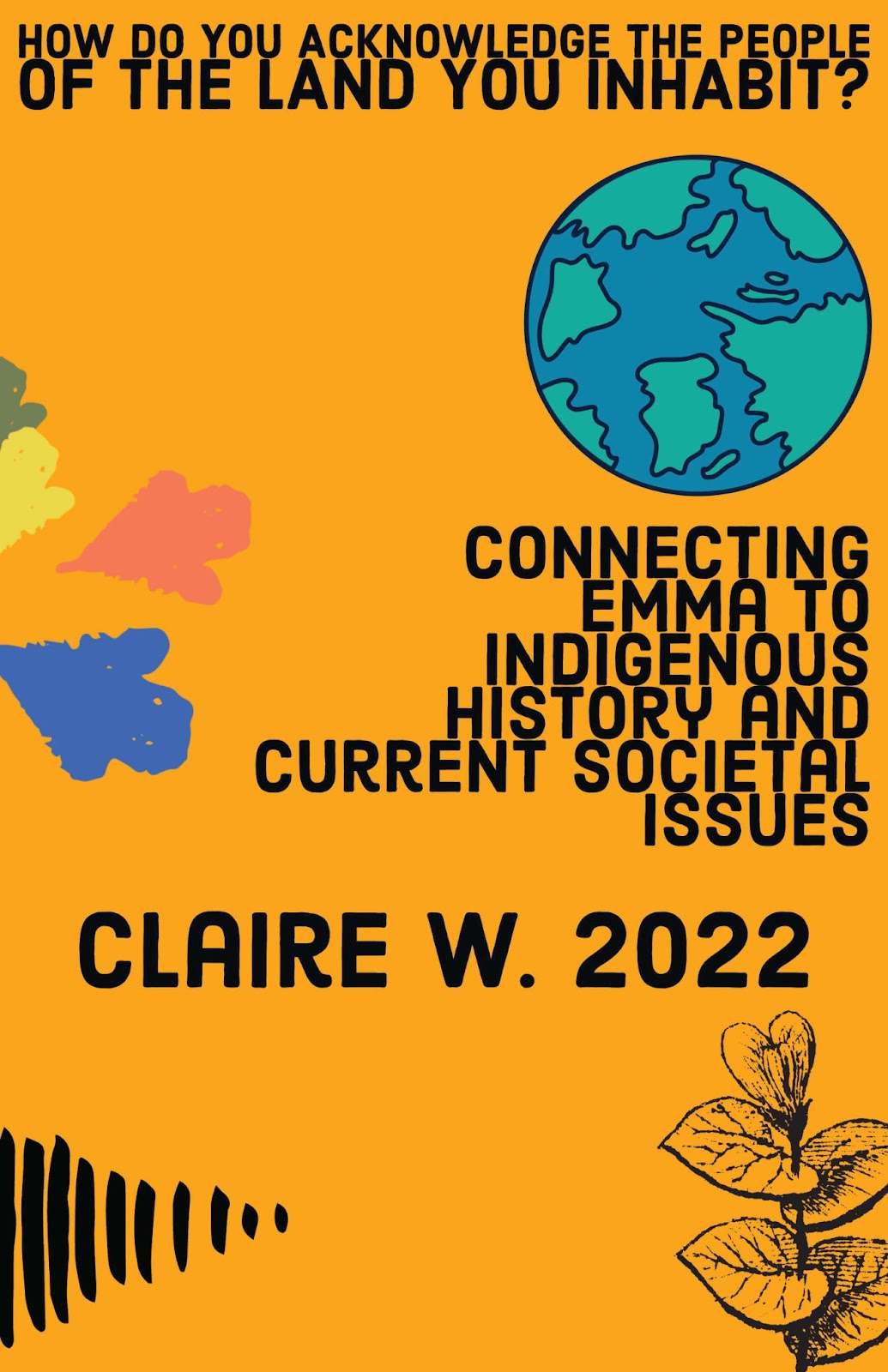 How Identity Impacts Work
Website | Video Presentation
Throughout this past year, I learned more about undocumented immigrants within the workforce, investigated the Fair Trade label, began to understand the balance between sustainability and affordability, and looked into how companies make decisions about where to source their products. Some highlights of my project included conducting interviews with the director of Mayan Hands, the produce manager at Honest Weight, and the general manager of Emma Dining. The course material in my AS (Advanced Studies) Spanish class has supplemented my Signature project during the Spring semester, as the class focuses on the experiences of undocumented Latin American immigrants, paths to citizenship, and how migrants begin their lives after crossing the border. I have compiled my research into a web page; while most of my work this year has been educating myself on this series of important topics, I am excited to share what I have learned with a larger community. 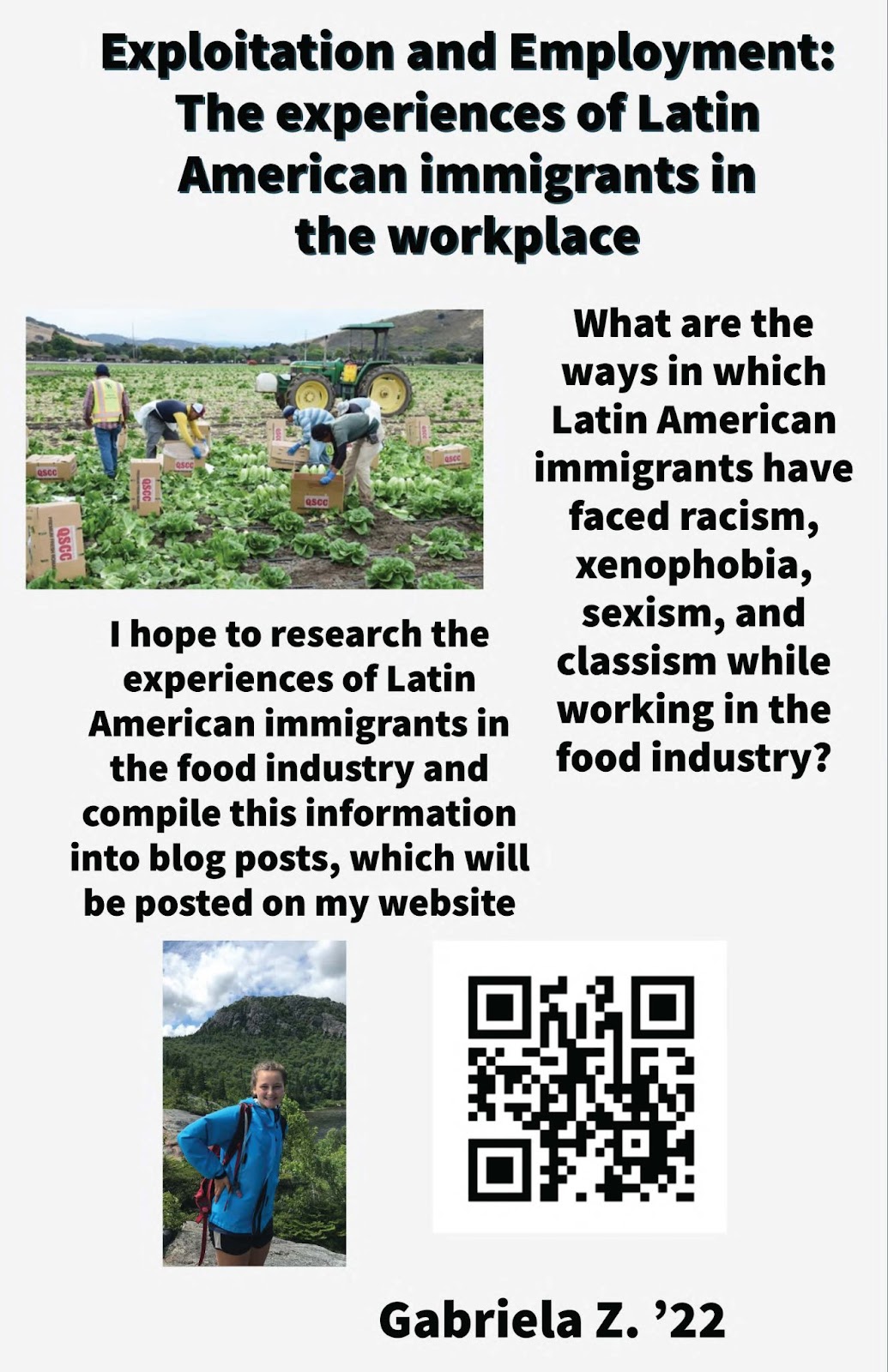 Teen Dating Violence And Abusive Teen Dating Behaviors
Website | Video Presentation
In August, 2021, the death of the 21-year-old Gabby Petitio in Wyoming captured national attention and sparked intense debates. While many were heartbroken, others wondered where did the attention go when indigenous women suffered the same kind of violence. Inspired by the case of Gabby Petito and the negligence on violence against indigenous women, I started my own Signature project in an attempt to address this ongoing issue.
Although it was difficult to gather specific cases, I managed to find several helpful organizations and scholarly articles related to my project. These resources helped me to understand what exactly does MMIW(missing or murdered indigenous women) mean and what are the factors leading to its causes. Inspired by what I read, I decided to create another website where I could share what I learned from the resources to my audience.
As I was building up my second website, I was looking for ways to introduce my project to more people. In the end, I participated in the NPR Podcast Challenge in March. It was my first time making a podcast but I was proud of my final work. Another exciting experience was the NYT Editorial Contest. For this contest, I wrote a brief essay to talk about the danger of media bias against indigenous women victims and what should media platforms do to minimize the amount of bias.
I hope my work can make people aware of the danger indigenous women face in our society and start acting in ways that can help them.
NPR Podcast Submission
NYT Short Essay Submission 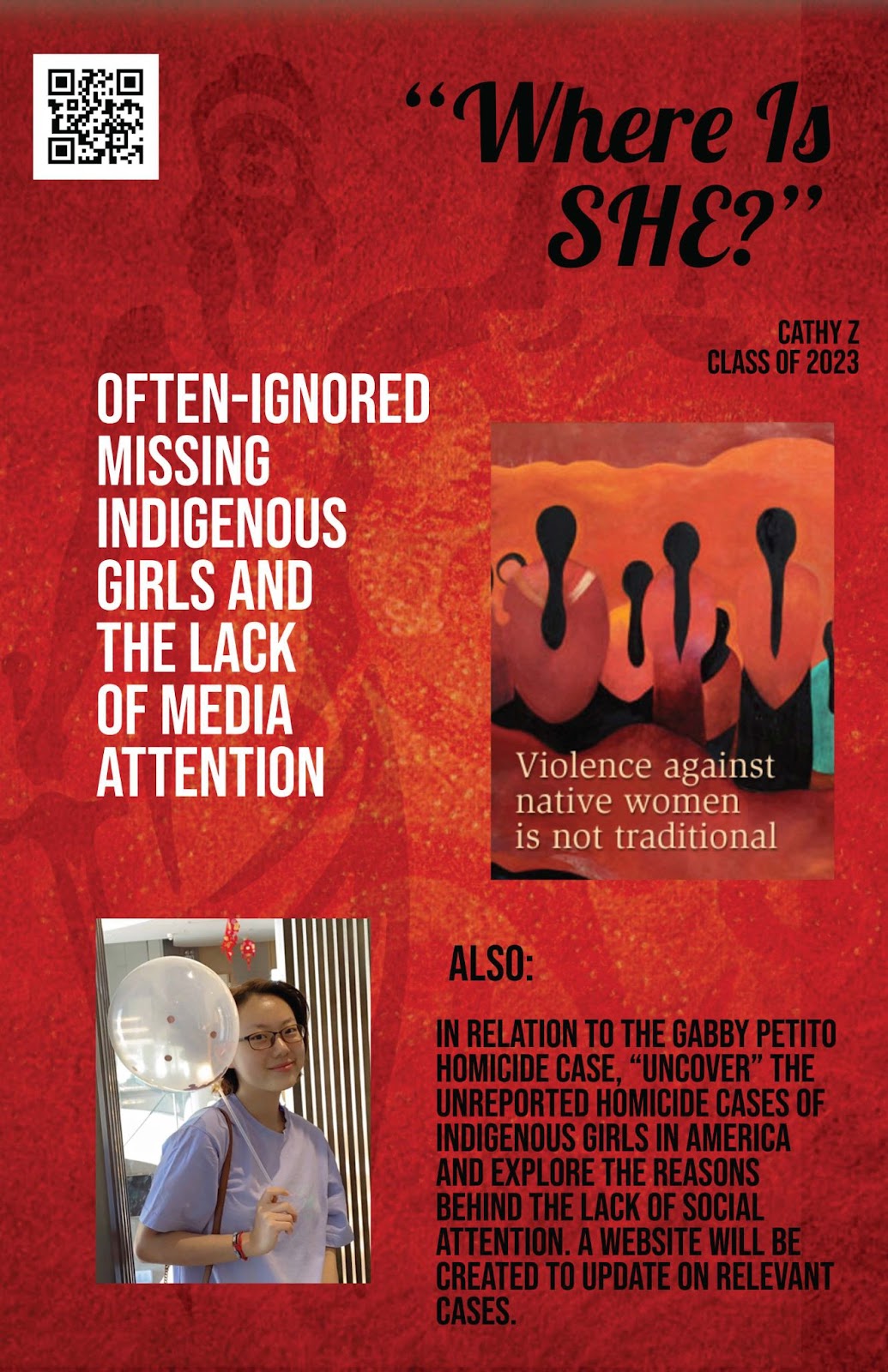